On May 5 2019, the Facebook page “Crafty Morning” shared a photograph of and affiliate link to purported “Tiffany Blue” roses (archived here), urging page fans to click through and purchase seeds to grow the stunning flowers:

The post was captioned “Have you ever seen a Tiffany Blue Rose? 💙” and it was shared more than 20,000 times in under 48 hours. A number of commenters purporting to have experience growing roses disputed the existence of cultivars in that shade, maintaining that growing a truly blue rose is impossible. Others insisted the image was likely digitally altered to attain the vibrant “Tiffany blue” shade.

A reverse image search made one thing clear — the photograph accompanying the image did not appear to have originated with the 2019 Etsy listing. The image shown in the Facebook post appeared online no later than July 2017, and the linked listing was dated May 7 2019. It is unclear if the Facebook post initially linked to an earlier listing, as the photograph for the listing did not match the photograph in the post.

The Etsy page to which Facebook users were directed was shared by the page “NaturesPotionsLtd,” and reviews were mixed. Purchases for blue rose seeds appear to date back to August 2017, but the image used for the listing was definitely misrepresented.

A base image used for the “blue rose” being peddled was first shared in 2008 or earlier, and its original version was a standard pale rose color: 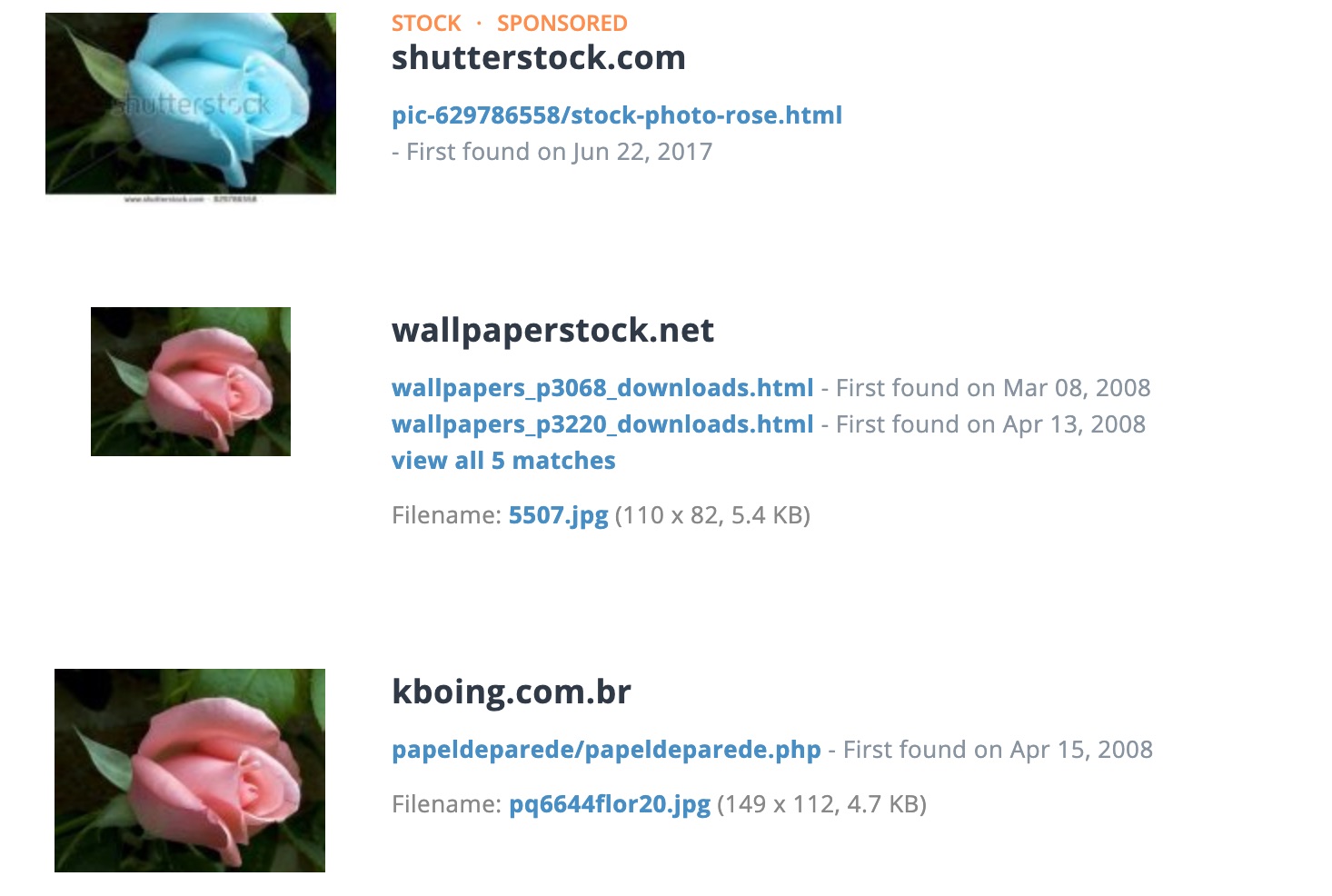 That seller’s use of a doctored image did not bode well for the authenticity of the listing, as presumably a retailer of blue rose seeds could easily grow the real flower. Additionally, the first reverse image search of the Facebook “Tiffany blue roses” image led to a separate Etsy listing shared by a different seller (GabysTropicalOasis): “ROSE OCEAN BREEZE fragrant bed plant garden flower 20, 200 or 2000 seeds.”

Once again, the listing was dated May 7 2019, and three of the most recent reviews posted that week were negative:

Seeds have been germinating for 3 months and not one of them have sprouted. I emailed seller and she/he was extremely rude. Will never do business with again

Disappointed, not a single germination out of the 6 bags of seed I bought, not sure what they are putting on these bags, do not waste your money.

None of the seeds germinated, seems like she has an ongoing problem with this. Wont buy again

A fourth recent review went further into depth about the seller’s purported issues:

a) I’ve never left a negative review on Etsy before

B) never been unable to get seeds to germinate before.

We can talk about the red flags:

Shop hasn’t been around long enough for anyone to actually have seen their seeds develop into blossoming plant.

Shop is using photoshopped flower images from another site which is a known scam.

I knew this before purchasing but because there were enough good reviews, went for it anyway.

Sure the seeds came fast but seeds to what? And why haven’t they sprouted? I read other feedback where the seller blamed the buyers and I’m not having that. Show me real photos of these flowering in your garden, otherwise how are you getting seeds for them? Why are there NO growing instructions included?

As that reviewer noted, the shop did use digitally altered images for its “ROSE OCEAN BREEZE” listing. Although the image appearing on both Facebook and the listing was inconclusive in terms of editing, that page featured two additional images of “blue roses.” One image dated back at least as far as 2014 and was not grown by the seller, and another was as old as 2013 and clearly altered: 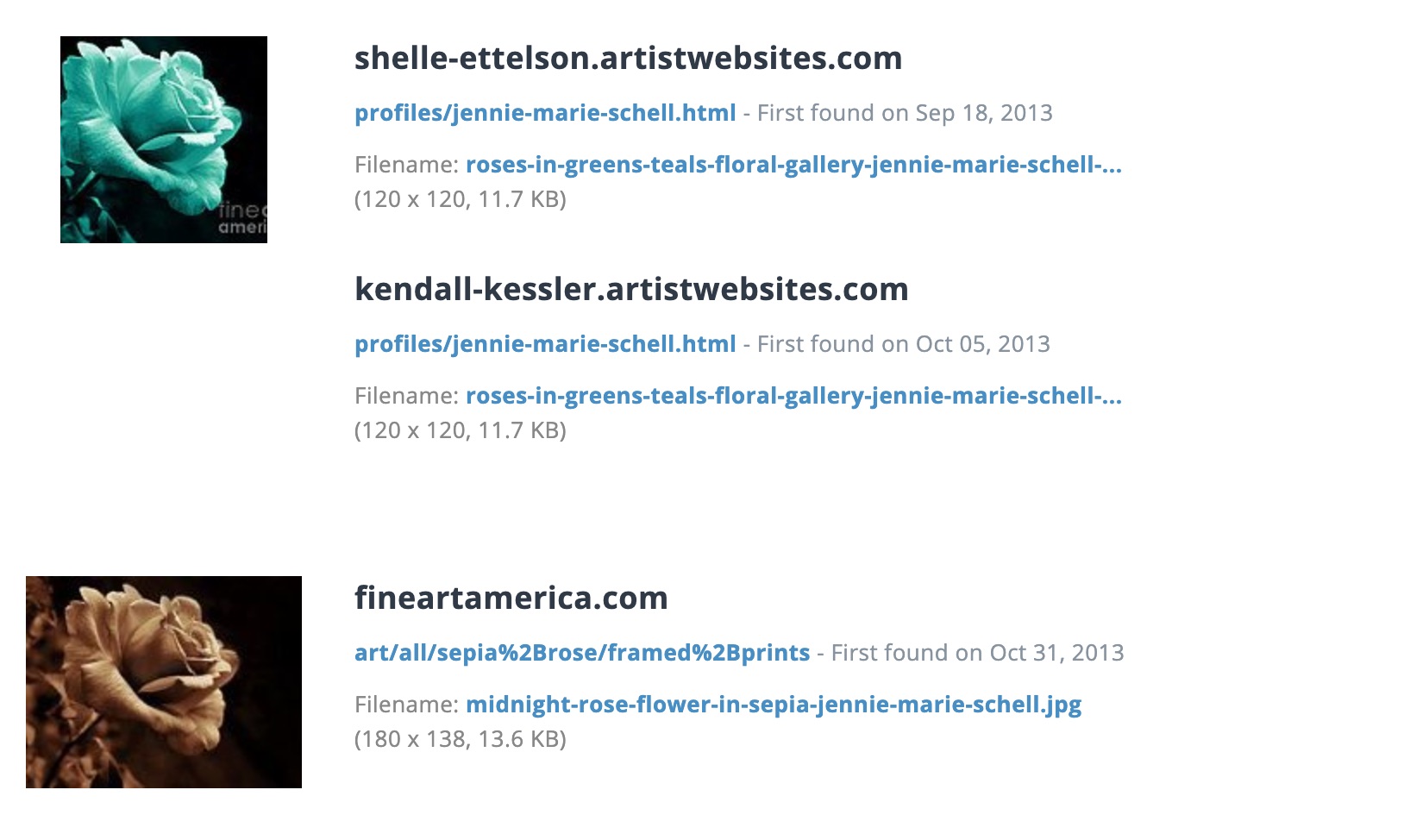 Another issue with the listing’s claim was that blue roses are notoriously absent from nature. In 2009, scientists in Japan created a “blue rose,” the first of its kind to not be dyed. However, that newsworthy rose was in fact “silvery purple,” not the saturated aqua seen in the image:

Named “Applause,” the rose is genetically modified to synthesize delphinidin, a pigment found in most blue flowers. The rose was first released in in Tokyo in 2009, after 20 years of research by Suntory, a Japanese company that also distills whisky, and its Australian subsidiary, Florigene (now Suntory Flowers). Today Suntory announced the rose will be for sale at select florists in North America, beginning early November. While the flower might appear more silver-purple than sky-blue, Applause is the nearest to a true blue rose yet.

Blue roses have a mythic quality because they, until recently, were impossible to grow. Roses appear naturally in many shades of red, pink, yellow and white, but lack the natural ability to produce blue pigments. For centuries, blue roses have conjured unrequited love or the quest for the impossible.

Due to their nonexistence, the concept of blue roses maintains a mystical, folklore-imbued symbolism:

Having been cultivated for more than 5,000 years, as many as 25,000 different species of roses currently exist, although colours are traditionally limited to red, pink, yellow and white.

A blue rose has long been synonymous with the unattainable, from signifying unrequited love in Chinese folklore to its Victorian era connotations of symbolising a quest for the impossible.

Those inspired by the image of a blue rose range from Rudyard Kipling who penned poems about the unnaturally-hued blooms to a string of characters featuring in modern day Japanese “anime” animation.

Blue roses have been available in florists in recent years but until now, they have been created by using various dying techniques to stain the petals of naturally white roses. However, the Suntory roses are believed to be the first genetically-modified blue rose creations.

In 2009, a horticulturist explained the mechanism by which the scientists came closer to a blue rose:

The blue color of the blue rose is provided by the pigment delphinidin, named for being originally isolated from Delphinium. For the delphinidin in the flower to appear blue, the environment inside the plants’ cells must be acidic.

This “acid factor” is what makes blue such a rare find in the plant kingdom. Not only does a plant have to have the gene to make delphinidin in its flower cells, the plant must be able to maintain a level of acidity within the cell to make the pigment appear blue. Few plants can accomplish this.

Roses do not naturally produce delphinidin. Though some estimates say there have been over 25,000 rose varieties bred, they are all some shade of red, white, pink or yellow. Blue roses created by traditional hybridizing techniques are all more a shade of lilac than really blue. Until recently the only way to obtain a true blue rose was to dye or paint a white rose.

Creating a blue rose required the use of genetic engineering. The Japanese company Suntory began its quest for the blue rose in a joint venture with Australian biotechnology company Florigene in 1990. Since roses do not naturally possess the gene for delphinidin, genetic engineers needed to transfer the gene from another plant that had the gene.

So were the 14 years of genetic engineering research a waste? Time will tell, but certainly the genetic engineers have set the stage for a true blue rose to be possible. The engineered roses not only have the delphinidin gene inserted in their genome, they have also been provided the genetic machinery to suppress the red pigments naturally present in roses.

The elusive blue rose’s trail appeared to go cold with the 2009 exhibition of Suntory’s cultivar. One of the two Etsy sellers had apparent reviews for blue rose seeds dating back to 2017. But in October 2018 (again, well after the photographs used in the listings first appeared and also after the reviews were published), the American Chemical Society reported:

Blue roses could be coming soon to a garden near you

For centuries, gardeners have attempted to breed blue roses with no success. But now, thanks to modern biotechnology, the elusive blue rose may finally be attainable. Researchers have found a way to express pigment-producing enzymes from bacteria in the petals of a white rose, tinting the flowers blue. They report their results in ACS Synthetic Biology.

For this purpose [attaining a blue rose], the researchers chose two bacterial enzymes that together can convert L-glutamine, a common constituent of rose petals, into the blue pigment indigoidine. The team engineered a strain of Agrobacterium tumefaciens that contains the two pigment-producing genes, which originate from a different species of bacteria. A. tumefaciens is often used in plant biotechnology because the bacteria readily inserts foreign DNA into plant genomes. When the researchers injected the engineered bacteria into a white rose petal, the bacteria transferred the pigment-producing genes to the rose genome, and a blue color spread from the injection site. Although the color is short-lived and spotty, the team states that the rose produced in this study is the world’s first engineered blue rose. They say that the next step is to engineer roses that produce the two enzymes themselves, without the need for injections.

As of late 2018 (after the images and reviews first appeared), scientists were only marginally closer to creating a non-dyed blue rose. The color attained in research published at the tail end of that year had produced a blue rose with a color that was “short-lived and spotty,” and the image of a blue rose seen in the Facebook post was first shared to the internet in 2017. Although that image appeared to show home-grown blue roses, that feat had not been achieved as of a year after the photograph appeared. No other possibility but editing remained for the image, and the chances that the seeds sold on Etsy would produce roses anything like those seen in the “Tiffany blue” picture are slim to nonexistent.