While serving in Congress between 1937 and 1957, Lyndon B. Johnson voted against civil rights legislation.

Right-wing commentator Candace Owens distorted the record of former United States President Lyndon B. Johnson during both a televised appearance and on Twitter in February 2020 in an effort to paint the Democratic Party as being anti-Black.

The remarks spun out of Owens’ defense of former New York City mayor Michael Bloomberg, who has emerged as a late contender for president on the Democratic Party ticket. His entry into the 2020 presidential race was “done,” she said, because he chose to run as a Democrat in the wake of saying years earlier that Black and Latinx men “don’t know how to behave in the workplace.”

“Because Bloomberg said this under the [Democratic] Party, he’s done. The good racist — the best racist on the left, by the way, is Bernie Sanders,” Owens said on February 17 2020. “Because he pretends to be their friend, he lies to Black America’s face while knowing he’s going to be the one, like Lyndon Baines Johnson — he’s Lyndon Baines Johnson 2.0 — who is going to enact policies that are going to harm Black America for the next 100 years.”

Critics of Owens quickly pointed out that during his presidency, Johnson signed both the Civil Rights Act of 1964 and the Voting Rights Act.

But she doubled down on Twitter. “Lyndon B. Johnson, while in Congress for 20 years, voted against EVERY SINGLE civil rights bill put before him,” she wrote. “He only signed the Civil Rights Act because he was forced to, as President. He was a racist, hence ‘I’ll have those n*ggers voting Democrat for the next 200 years’.” 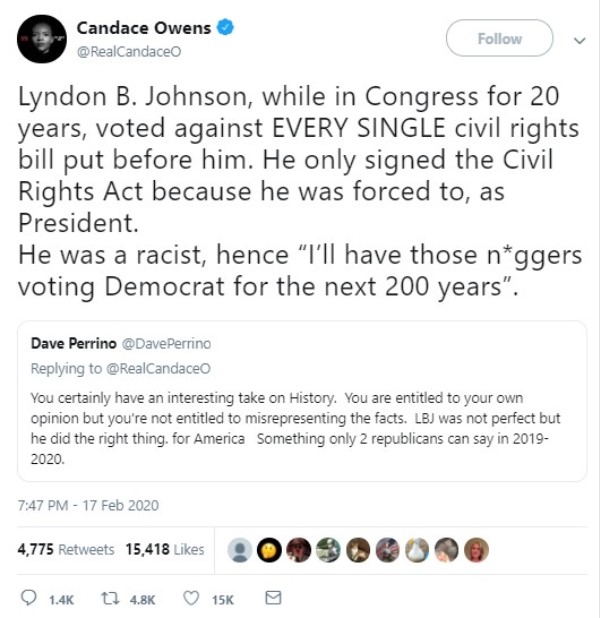 It is true that between 1937 and 1957, Johnson consistently voted against civil rights legislation. In April 2014, then-President Barack Obama made the same criticism during an appearance at the Johnson presidential library. But a 2013 observation by historian Robert Caro, who wrote multiple biographies of Johnson, rebukes Owens’ argument that Johnson was “forced” to sign the Civil Rights Act. Caro said:

From 1937 to 1957, Johnson’s record was on the side of the South. He not only voted with the South on civil rights, but he was a southern strategist, but in 1957, he changes and pushes through the first civil rights bill since Reconstruction. He always had this true, deep compassion to help poor people and particularly poor people of color, but even stronger than the compassion was his ambition. But when the two aligned, when compassion and ambition finally are pointing in the same direction, then Lyndon Johnson becomes a force for racial justice, unequalled certainly since Lincoln.

The quote Owens attributed to Johnson was first published in the 1995 book Inside the White House: The Hidden Lives of the Modern Presidents and the Secrets of the World’s Most Powerful Institution written by journalist Ronald Kessler. But Kessler did not quote Johnson directly; instead, former Air Force One steward Robert M. MacMillan claimed that Johnson said it in a separate conversation with two unidentified governors: 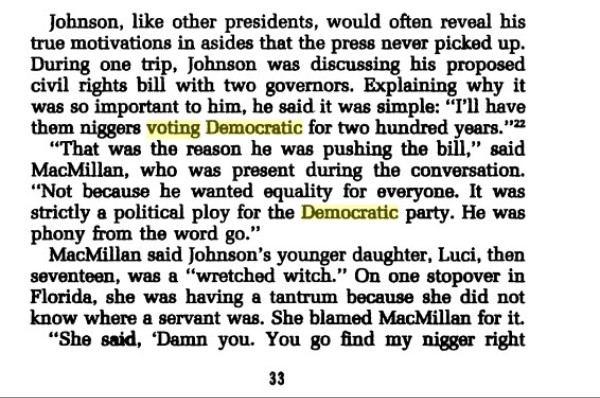 That quote has not been corroborated or verified from sources outside of Kessler’s book. But Johnson’s use of the anti-Black slur in other instances has been confirmed; in his 2003 book Master of the Senate, Caro reported that as Senate Majority Leader, Johnson would employ it in trying to convince Southern Democratic lawmakers to vote for the Civil Rights Act of 1957:

As historian Kevin Kruse pointed out in responding to Owens, Johnson would vote for both that bill and the Civil Rights Act of 1960.

Caro noted in Master of the Senate that Johnson’s actions left pro-segregation Georgia “Dixiecrat” Herman Talmadge disillusioned; while in the Senate, Talmadge said, Johnson reassured southern lawmakers that he was on their side only to intone the activist phrase “We shall overcome” while signing the Civil Rights Act of 1964 into law:

The author then asked, “Do you feel that Lyndon Johnson betrayed you?” There was a longer pause. It could not have been easy for a politician as wily as Herman Talmadge to admit he had been fooled so completely. “Yes,” he finally said.

In his latest run for the presidency, Sanders has called for both the restoration of the Voter Rights Act and the expansion of voting rights to cover not only former felons, but anyone currently incarcerated. He is also one of several Democratic candidates supporting automatic voter registration for any eligible United States citizens once they turn 18.