In mid-2020, a purported photograph of “cannabis ice cream” circulated on Facebook as a mildly engagement-baiting poll asking whether readers were for or against the putative dessert:

Earlier iterations of the image featured the same text reading “cannabis ice cream,” but lacked the “yes or no” element encouraging users to interact with the post:

The image was even older than that; nearly four years before “cannabis ice cream” was shared in the above tweet, a blogger included the photograph in a November 2014 post bearing the same title, and wrote:

I have just returned from a city break in Amsterdam and I saw this sign in the window of a store in the centre of the city. So to sign-off my recent blogs on ice cream, I just thought I would share this most unusual ice cream flavour with readers. No, I didn’t get around to trying it myself (I promise you), but this is what it looks like if you are ever in the wonderful cosmopolitan Dutch city of Amsterdam.

Although the author included. the image and said “this is what it looks like,” the post’s other image suggested otherwise: 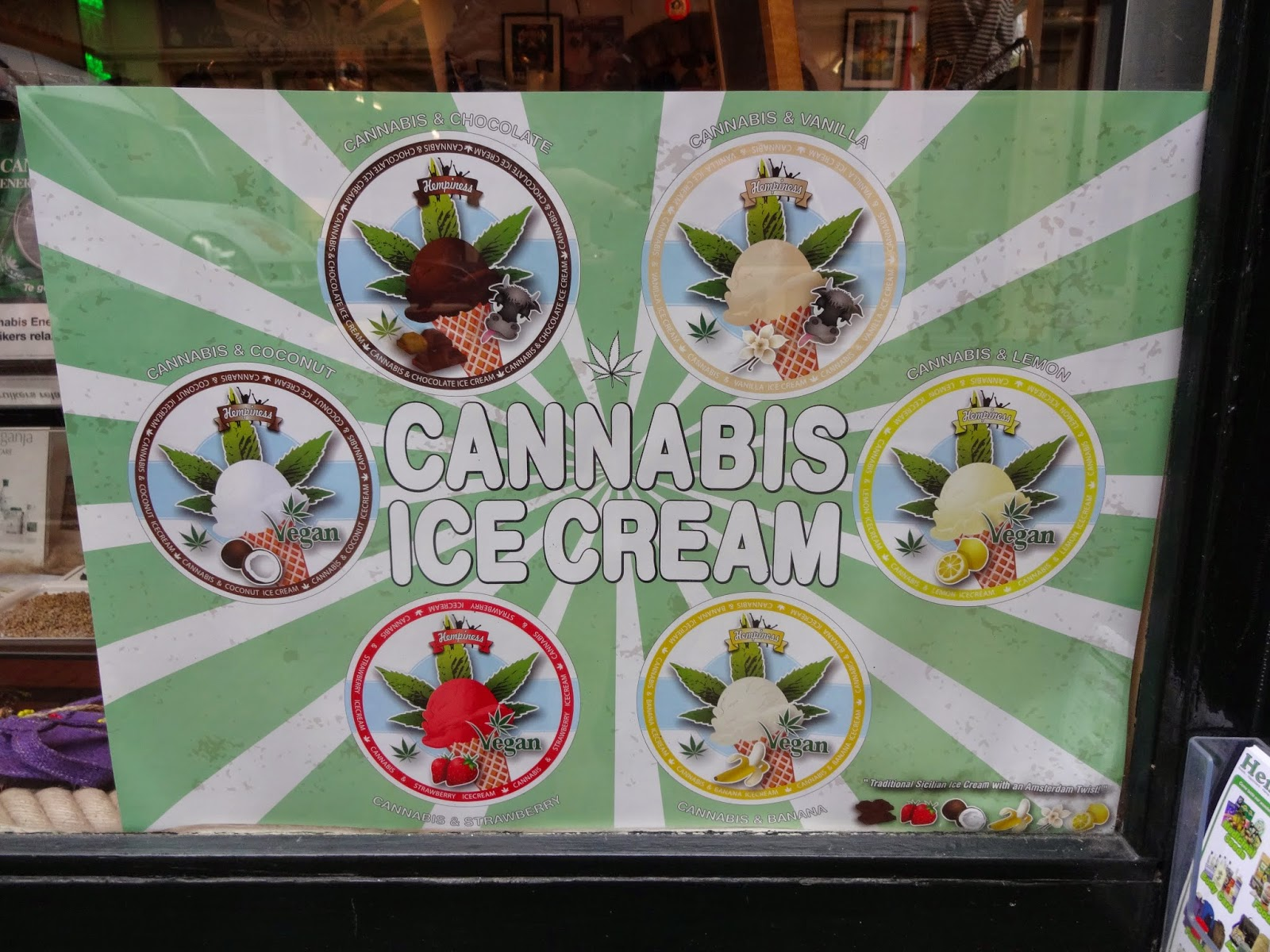 All six advertised flavors were depicted on the poster, and all were scooped hard ice cream, not soft serve. Each flavor was depicted in front of a cannabis leaf, and none were even faintly green in color — much less a vibrant green.

The flavors and colors were as follows:

No element of the advertisement indicated a strictly cannabis flavor was available, or alluded to the portion size seen in the viral image. Small white text in the lower right-hand corner read “Traditional Sicilian ice cream with an Amsterdam Twist.” Finally, the image in question did not originate with that blog post, and was first crawled by TinEye in October 2014:

In August 2015, the blog Curious About Cannabis/Cannabis Corner featured the image in a post titled “Cannabis Edibles: GREEN Ice Cream!” However, the post primarily described what was at the time the growing popularity of cannabis edibles, and discussed methods to make homemade ice cream infused with cannabis:

Ice Cream infused/made with Cannabis is becoming quite popular. Ben Cohen (of Ben and Jerrys famously branded ice cream impresarios) declared on HuffPo Live that they’d support making a cannabis-infused version of their sweet treats available where marijuana is legal. SO, how probable is it that we’ll see Ben & Jerry’s “Reefer Rum” or “Cheeba Cherry” in the freezer case?

With the sale of almost 5 million edibles in Colorado last year, according to Time, creating a food-based marijuana product seems like a no-brainer for Ben and Jerry’s… BUT, for now, it’s not happening  … Speaking with Brian Smith, co-owner of Ample Hills Creamery, a Brooklyn-based ice-cream shop, for some ideas about making a weed-infused ice cream at home. Smith says they’ve concocted a lot of flavors that involved steeping ingredients like Cap’n Crunch, pretzels, or tea leaves, which is exactly what you would do to make a weed-infused ice cream. According to The Stoner’s Cookbook, you should cook (decarboxylate) your weed first,, but the steeping process will give you a smoother texture and a stronger potency.

A separate 2015 Italian blog post said of the image:

Green like pistachio, it is an ice cream that has tasty cannabis seeds at its base, however free of THC, the famous active ingredient, mixed with milk and vanilla, and with the addition of a tasty caramel.

A flavor that many have liked and that has already received hundreds of bookings from ice cream makers from all five continents, happy to rely on the experience of MEC3, the Italian company that invented and produces it.

That claim did have some basis in truth — a product known as One Love Hemp Gelato by Italian company MEC3 went viral in March 2017. But as The Daily Meal noted, the product offered no psychoactive effects:

As medical marijuana sweeps the nation, and more states and cities are legalizing greenery, one product, cannabidiol from Hemp Health Inc., gives you the benefits of medical marijuana without any of the psychoactive effects of the THC chemical. And now you can have these benefits in gelato form. Introducing Italian gelato and pastry products giant MEC3’s One Love hemp-flavored gelato. Cheekily named after Bob Marley, the ice cream product is completely legal in all 50 states because it does not contain any THC: just the hemp plant minus the munchies and paranoid thoughts. But the good news is that the ice cream does taste exactly like marijuana. Watch out, Ben & Jerry’s, these guys are ahead of the marijuana ice cream game.

CNN Travel also reported on the product in March 2017, reiterating that MEC3’s One Love hemp-flavored gelato would not produce the high associated with cannabis edibles:

Perleco, a gelato parlor in Alassio, recently launched the gelato — named Marley after reggae legend Bob. But while it sounds like a weed fiend’s dream, its makers say the frozen treat isn’t going to get anyone high.

CNN also featured an image of the flavor — which was neither green nor soft serve: 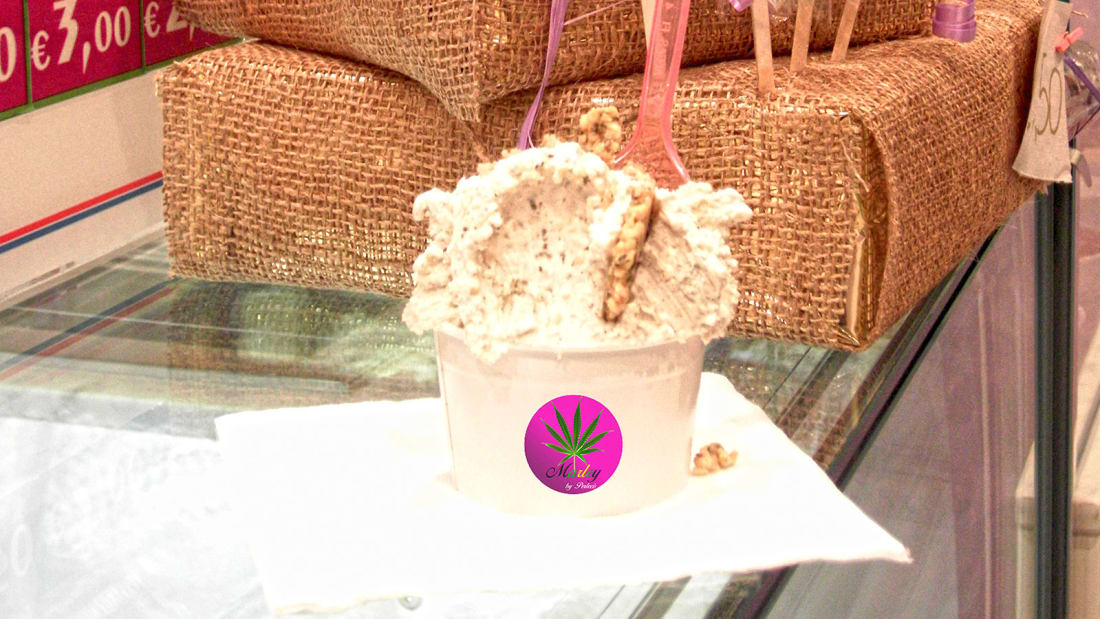 Consistently, the image was mislabeled and presented as an accurate depiction of “cannabis ice cream,” often alongside blog posts or content about cannabis-flavored ice cream.

Although image crawlers first tagged the photograph of two green soft-serve ice cream cones in October 2014, it was still older than that.

The first iteration of the image we found was shared on April 13 2014, by Tumblr user lychei (archived). In the post, the user described it as “green t soft serve”:

Initial comments on the post complimented the image, and asked what flavor ice cream was depicted. One user asked if it was “weed ice cream,” and the user answered that it was “green tea!”

A handful of cannabis edible manufacturers do retail THC-infused ice creams, but the products are sparsely distributed (likely due to logistical difficulties) and they aren’t necessarily green, either.

A company in the Netherlands, Dr. Greenlove, produced a Drumstick-like, cannabis-infused product:

As did other small-batch purveyors, such as @janeandmarys:

A popular engagement baiting poll featuring the same image of “cannabis ice cream,” a bright green soft-serve cone, circulated on Facebook and other sites. The image was inaccurately labeled, and shows soft-serve green tea ice cream. Although cannabis-infused ice cream edibles exist, those products appear to be not widely available in many American dispensaries.