Rowling posted a photograph of herself wearing a shirt she said she bought from Wild Wymen Workshop, a United Kingdom-based site that, as LGBTQ Nation and other sites reported, features a merchandise section called “gender critical.” 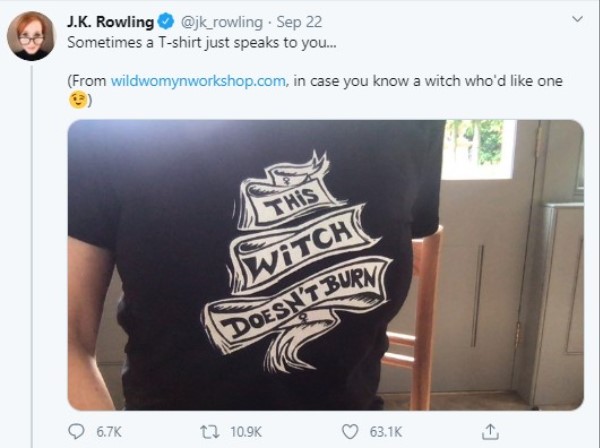 Among the items listed in the “gender critical” section are buttons bearing messages that seem less critical and more directly insulting:

The author, who has been criticized by both LGBTQ communities and public figures in the past for spreading disinformation about transgender people, also endorsed the online shop amid the release of a new mystery novel she penned under the pseudonym “Robert Galbraith.” Reviewers noted that one of the characters, a man, is depicted dressing like a woman to trick his victims. According to The Guardian:

Creed lures his victims into his van by wearing a woman’s coat and wig, but the novel never describes him as a transvestite — although it does tell how, as a young man, he stole women’s underwear from his neighbours and masturbated into it.

Writing on Galbraith’s website, Rowling has now revealed that Creed “was loosely based on real-life killers Jerry Brudos and Russell Williams – both master manipulators who took trophies from their victims”.

Brudos killed four women in Oregon during the 1960s. As a young man, he stole female underwear from his neighbours, according to The Encyclopedia of Serial Killers, which also cites reports of “a large man, dressed in women’s clothing” in the garage from where he abducted his victim Karen Sprinker. Williams was sentenced to life in prison in 2010 for murdering two women. The former commander of Canada’s largest air force base, he pleaded guilty to two counts of first-degree murder, two sexual assaults and 82 counts of breaking and entering, which saw him take hundreds of items of underwear from women and young girls.

Rowling, who amassed critical and commercial success writing the Harry Potter book series, has also drawn criticism for choosing the “Galbraith” alias. She described the process behind that name online:

I chose Robert because it’s one of my favourite men’s names, because Robert F Kennedy is my hero and because, mercifully, I hadn’t used it for any of the characters in the Potter series or The Casual Vacancy.

Galbraith came about for a slightly odd reason. When I was a child, I really wanted to be called ‘Ella Galbraith’, and I’ve no idea why. I don’t even know how I knew that the surname existed, because I can’t remember ever meeting anyone with it. Be that as it may, the name had a fascination for me. I actually considered calling myself L A Galbraith for the Strike series, but for fairly obvious reasons decided that initials were a bad idea.

Odder still, there was a well-known economist called J K Galbraith, something I only remembered by the time it was far too late. I was completely paranoid that people might take this as a clue and land at my real identity, but thankfully nobody was looking that deeply at the author’s name.

But the nom de plume, which Rowling began using in 2013, is also similar to that of the American psychologist Robert Galbraith Heath, who claimed in one experiment that he could “cure” homosexuality by inserting electrodes into parts of a subject’s brain.

Journalist Robert Colvile, who reported on Heath’s practices in 2016, refuted that there was any connection between the Heath, who founded the department of psychiatry and neurology at Tulane University, and Rowling.

“We called it one of the ‘great forgotten stories of neuroscience’ because everyone had forgotten it,” Colville wrote in June 2020. “J.K. Rowling did not choose her pseudonym out of homophobia or insensitivity. She could not have known about this guy — who everyone called Robert Heath anyway, or just Bob.”