An image purportedly showing a petri dish of bacteria grown after swabbing a mask worn by a child for twenty minutes proves that face masks are a health risk.

In late September 2020, the following image began circulating on social media, purporting to show what sort of bacteria can be cultured in a petri dish after a face mask was worn by a child for twenty minutes, then swabbed:

Recently, I mentioned that a mask is like a petri dish and it's going to negatively affect those who wear them. Today, I see this picture of a petri dish, which was cultured from a swab of a child's mask after wearing it for 20 minutes. pic.twitter.com/HPrjIp9M2H

Variations on the claim appeared to have also been spread on German-language sites and on Twitter in German; the image was featured on a German blog’s daily list of links (archived), but no further information about the image was included:

It seemed one of the first viral English-language iterations was shared by the Instagram page @thetruthaboutvaccines, but we were unable to locate the original post. Its text was commonly seen copied to other posts above:

After a short time of wearing a mask, the bacteria was grown in a petri dish. Mask? No thanks! pic.twitter.com/UFZRDq8Dfm

One of the earliest versions of this photograph and claim that were able to locate appeared on Facebook on September 18 2020, from Marianna Childress-Milne: 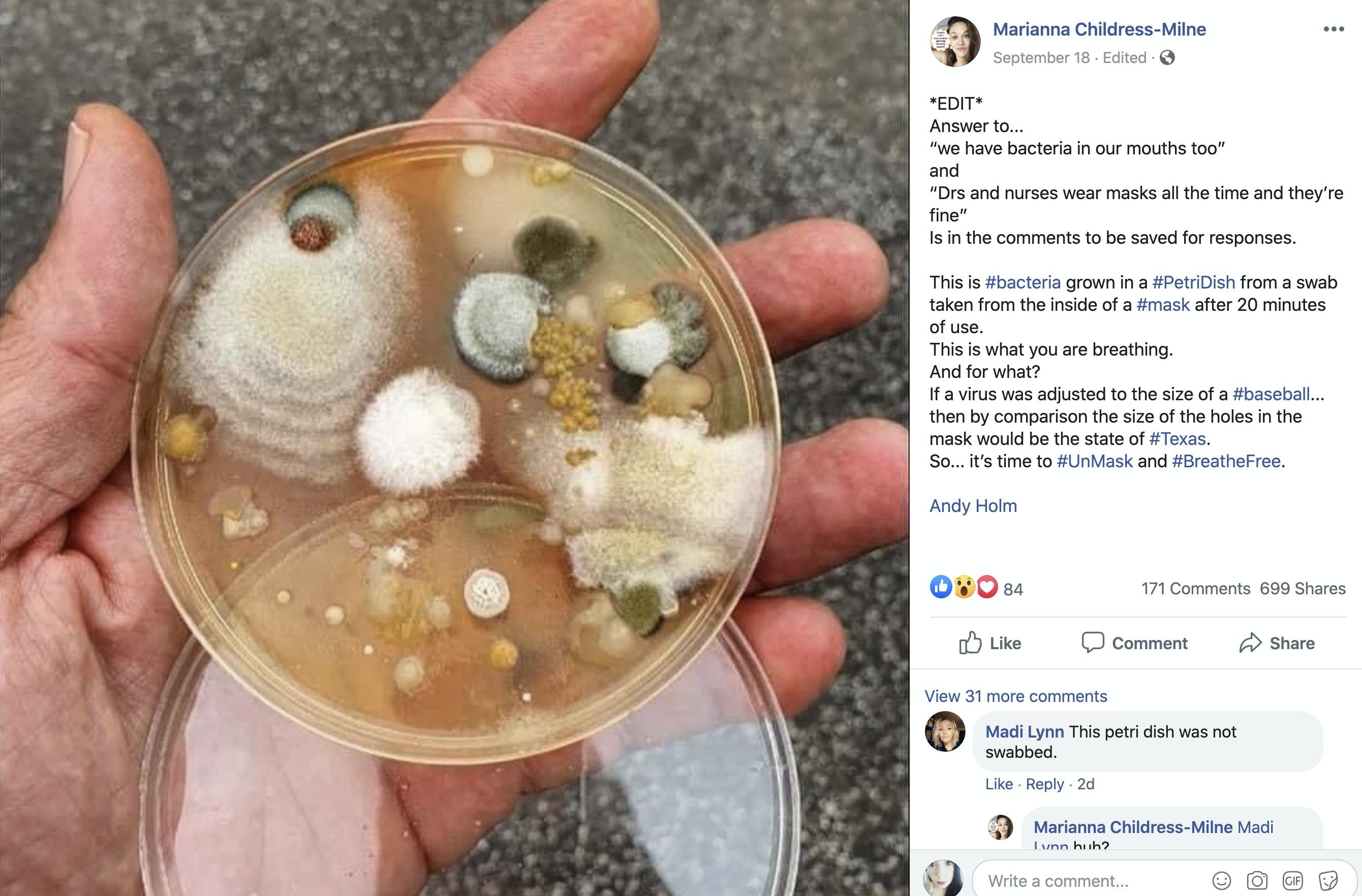 We were unable to locate an iteration that was definitively older than that one, but some “content not available” posts included similar wording. Commenters on the post asked for additional information about the image and the conditions under which the purported experiment was performed.

Childress-Milne admitted that she shared the image on without verifying its accuracy, stated that the claim was secondhand, and that it was likely a “personal home experiment”:

it was just someone doing their own personal home experiment from what I understand. Lol. You are welcome to disagree with it and disregard it or keep scrolling or ignore it altogether. #freedom.

This petri dish has a swab from a child’s mask that was left to cultivate for 20 minutes.

This is what you and your child are breathing in.

While a massive number of people shared and repeated the story, we were unable to find even one person who claimed to have done the experiment themselves. It is possible — or, really, probable — that the image was completely unrelated, mislabeled, or otherwise misleading.

If the claims that face masks are breeding grounds for bacteria, viruses, or fungus seemed familiar, it’s because those same claims have been appearing regularly in various forms throughout 2020.

Posts shared on Facebook claim that “people are starting to enter ER’s with fungal lung infections from wearing masks,” advising users to take breaks from wearing them. This claim, however, is false.

Dr. Thomas Nash, an internist, pulmonologist, and infectious disease specialist at New York Presbyterian Hospital in New York City ( here ), told Reuters, “The only thing that hits the mask is what you breathe out,” explaining that healthy people “don’t exhale fungus.”

Nash said that someone who already has a fungal infection in their lungs could possibly contaminate their own mask, but not the other way around.

In June 2020, Dr. Niket Sonpal told CBS affiliate WLNY-TV that despite all the mask scarelore, doctors and nurses have been wearing masks throughout their careers, yet none of them suffered any ill consequences from years of mask wearing:

“Every health care provider in the world wears their masks for 8 to 12 hours a shift … and not a single one has perished,” he said.

“Is there any truth to, ‘if I wear my mask too long, I’m just kind of recirculating my own bacteria and I can get sick from that?’” CBS2’s Jessica Layton asked.

“No, there’s no evidence actually or data to say that,” Sonpal said.

A photo of a Petri dish full of germs is circulating on Facebook. It is supposed to prove that a [mask] is bad for your health. The accompanying text describes symptoms that should occur after wearing. Some of the claims are unsubstantiated and misleading.

Corretiv.org ran the images by the German Society for Pneumology and Respiratory Medicine (DGP); they explained that results like those in these photographs are very easy to create:

In the text accompanying the photo of a Petri dish full of germs, it is claimed that a smear was taken from a mouthguard that was worn for seven hours and that after 24 hours in an incubator, numerous germs developed. It is suggested that these germs are dangerous.

The German Society for Pneumology and Respiratory Medicine (DGP) wrote by e-mail to a request from CORRECTIV: “Which germs these are cannot be identified from the culture alone. The culture plate would also look like this if you spit on it. We all have a lot of bacteria in the mouth and airways. This is known as the normal ‘flora’. However, these bacteria have no disease value. ”

Conclusion: The claims are unfounded and partly wrong. The photo of the Petri dish does not prove that harmful germs collect in the mask. The sweeping assertion that wearing a face mask means inhaling more CO2 is wrong. In addition, the symptoms described do not occur if there is no allergy and the mouth and nose mask is worn properly.

We contacted two scientists to ask about the claims and received one assessment of the image, which disputed the claim as presented on social media and noting a lack of “streak pattern” indicative of swabbing:

Okay, there is bacteria everywhere in the dish.

It was intentionally cultured, not swabbed. There is also fungi in there as well. This appears to be some kind of stock image of airborne bacteria, mold, and fungi[.]

When you swab, you have to wipe the swab onto the surface of the Petri dish, leaving a streak pattern behind. The image in this post is distinctly of airborne microorganisms, not a swabbed sample[.]

In September 2020, an unsourced image purportedly depicting “bacteria grown in a petri dish,” “from a swab taken from the inside of a mask after 20 minutes of use by a child” spread like wildfire across Facebook, Twitter, and Instagram. Throughout 2020, medical experts and scientists repeatedly debunked similar claims. There was no evidence the image was accurately represented and no one claimed to have undertaken the experiment personally. Plenty of evidence supported the relative safety and efficacy of face masks, and no evidence indicated the image was accurate or informative with respect to public health.