British Naval Capt. James Cook was killed by indigenous Hawaiians during a battle on Valentines Day.

If you’re tired of the Valentine’s Day hype, consider this: Some people on social media are going with a of a British explorer’s death at the hands of indigenous Hawaiians as a way to mark February 14th instead.

For example, a Facebook post celebrating the death of “douchebag” Capt. James Cook on that date in 1779 has been shared thousands of times since first being published on February 11 2019: 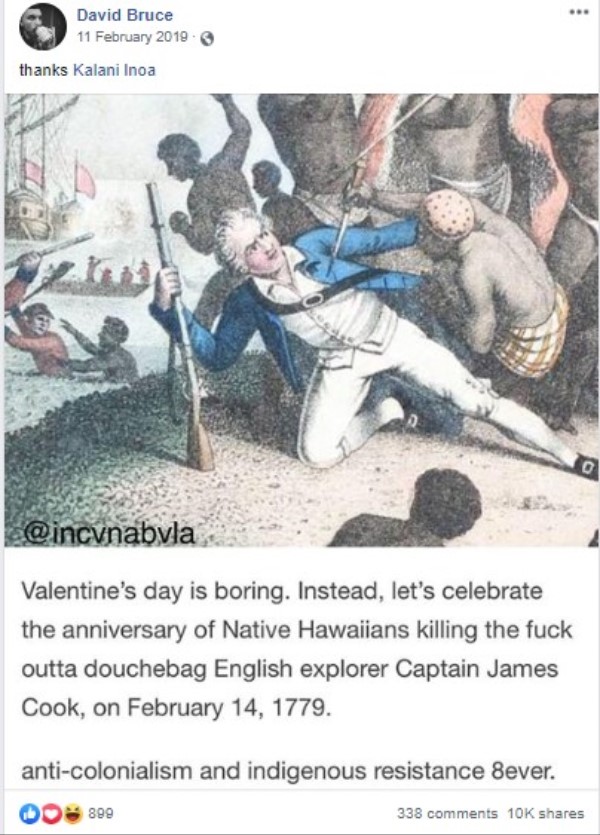 More recently, a separate February 13 2020 post gained thousands of shares in its own right within a day of being published.

Cook led three British expeditions to Hawaii and also mapped vast stretches of the Pacific Ocean during his travels. According to a locally-compiled resource, HawaiiHistory.org, he first landed in the area in late 1778, at which point he and his men were “greeted ritually as gods and presented with gifts and offerings.”

Glyn Williams, a history professor emeritus at Queen Mary University of London, partially corroborated this account in his 2009 book The Death of Captain Cook: A Hero Made and Unmade, reporting that while the British expedition actually reached Kealakekua Bay in January 1779, Cook was indeed “wrapped in red cloth and presented a hog” during a religious ceremony as local priests chanted around him.

In early February 1779, Cook and his men attempted to leave Hawaii but were forced to turn back when one of his ships, the Resolution, sustained a damaged mast; by that point relations between Cook’s men and the native population were already reportedly strained. The battle that would ultimately claim Cook’s life was reportedly touched off by the alleged theft of items from his ships. He responded by attempting to seize a local chief, Kalani’opu’u, inciting the fight.

Lieutenant Molesworth Phillips, who served under Cook and survived the fight, was later quoted as saying:

Our unfortunate Commander, the last time he was seen distinctly, was standing on the water’s edge, and calling out to the boats to cease firing, and to pull in. If it be true, as some of those who were present have imagined, that the boat-men had fired without his orders, and that he was desirous of preventing any further bloodshed, it is not improbable, that his humanity, on this occasion, proved fatal to him… having turned about, to give his orders to the boats, he was stabbed in the back, and fell with his face into the water.

But a painting of the battle revealed in 2004 shed new light on Cook’s actual role in the battle, one that was not as heroic as the one described by Phillips or John Webber, the official artist for his final expedition. Whereas Webber depicted Cook with his back to the Hawaiian crowd during the attack, ordering his men not to fire, a painting of the same scene by John Clevely — whose brother served as a carpenter on the voyage and drew his own sketches of the fight — shows Cook brandishing an unloaded rifle at one of his enemies:

According to The Guardian, Clevely supplemented his depiction of Cook’s death with other first-hand accounts from the battle.

“The image of Cook signalling his ships to hold their fire made him a classic humane and heroic figure of the age of enlightenment,” art historian Nicholas Lambourn said after it was first displayed in public. “Clevely’s is less heroic but certainly more accurate.”