A caravan of people traveling through Mexico are now terrorizing its federal police, as shown by photographs.

As a group of desperate women, men, and children traveled north from Central America to try to turn themselves in at the United States border in the hopes of receiving asylum, disinformation and smears about the group and their motives flew thick and fast: 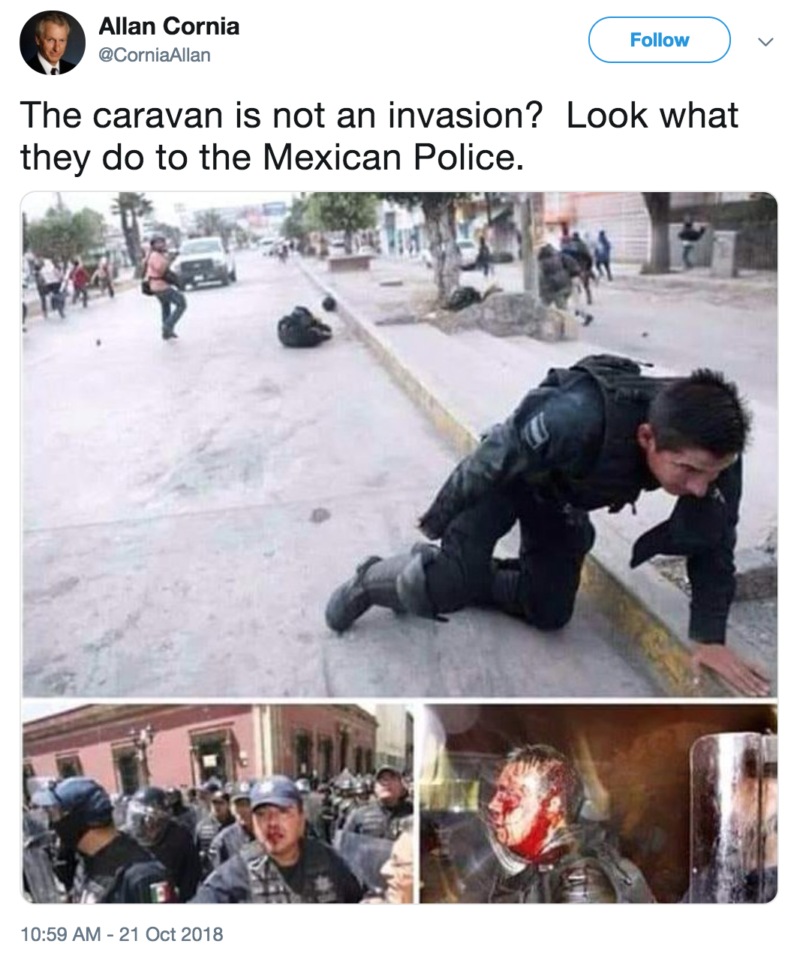 The caravan is not an invasion? Look what they do to the Mexican Police. pic.twitter.com/DLaYYwJP6P

An image shared by Ginni Thomas, wife of Supreme Court Justice Clarence Thomas, showed two men in battered riot gear bearing the insignia of Mexico’s federal police, one with blood pouring down his face. She wrote:

The media won’t share THIS, will they? It is an invasion, and thank GOD for President Trump.

The cry was naturally picked up by the usual suspects, all sharing the same image and similar descriptions.

Unfortunately for Thomas (and everyone else), she was wrong about the year, about whether media would cover it, and what the confrontation was about — in fact, she was completely wrong on all counts.

The image comes from an incident in Michoacán in 2012 between Mexico’s federal police and a group of student teachers known as normalistas, so called because they attend schools that hew to specific norms for teaching purposes — normal schools. Normalistas in Mexico frequently come from impoverished rural areas by design:

The ‘normalista’ schools, the educational centers that provide professional teachers with an undergraduate education, were born during the Mexican Revolution of 1910 when the country was still mostly made up of farmers. José Vasconcelos, rector of Mexico’s National Autonomous University (UNAM) and Minister of Education from 1921 to 1924 embarked on an educational crusade using rural teachers. He chose them because they were the figures that could widen the spread of the spirit of the Revolution. “He attempted to give Mexicans a sense of their country. The teacher taught reading and writing and how to make soap or undertake carpentry work,” explains historian Lorenzo Meyer. “It was a difficult time. In the 1920s teachers were being treated badly. The Cristeros (Catholics in arms against the Revolution) did not accept them and ended up killing or mutilating a great many of their number.”

Problems arose when Mexico stopped being rural and the government ceased being revolutionary: “These schools had a left-wing, radical outlook, so much so that they wanted to close them. But that proved no easy task because they provided the only opportunities for people from the countryside.” Two of Mexico’s greatest guerrilla leaders of the 1960s and 1970s came from the Raúl Isidro Burgos school: Genaro Váquez Rojas and Lucio Cabañas. The students still venerate them. Cabañas was the teacher who organized and aided peasants by defending their rights. He began the armed group, the Partido de los Pobres (the Party of the Poor). Guerrero suffered military and political repression during the so-called Dirty War of the 1960s and 1970s. Even today, in the local mountains, you can come across townships that have some of the country’s lowest human development indicators.

These schools never forgot their past, and as part of their tradition continue to press for egalitarianism and an end to brutal state repression, which over the years has laid a heavy hand on Mexico’s rural and agricultural centers. Sometimes their students are able to bring about changes. Sometimes, the confrontations erupt into violence.

One particularly horrible example of the latter took place in 2014, when 43 students from Ayotzinapa’s famous Raúl Isidro Burgos teacher training school in Guerrero state were “disappeared” by officials in nearby Iguala, Mexico (police first fired wildly at them, killing six people, including a pregnant woman and a young rising sports star, neither of whom were involved with the confrontation, which along with the ongoing government cover-up has become a symbol of state repression.) Few traces of the missing students have been found since, although the remains of one man, Julio César Mondragón, were found in a field days after the disappearance. His body showed clear signs of torture; his face had been flayed.

One of the misappropriated photographs purporting to be from the caravan actually comes from an incident two years before Ayotzinapa in 2012, far north of Guerrero in the state of Michoacán, when federal police forcibly and violently removed, beat, and arrested dozens of students who opposed education reforms.

Students fought back with rocks and bottles, but were eventually taken into custody. The photograph, which was taken by journalist Gustavo Aguado, shows an officer who had been hit and injured by projectiles.

The image of the officer on the ground comes from Chilpancingo in 2014 under similar circumstances. The officer with the bloody nose, Oaxaca in 2012.

Far from some sort of “invasion” by a violent horde, or whatever other vivid Camp of the Saints-inspired imagery bots and trolls are spawning on social media, these photographs show conflicts between Mexican police and Mexican citizens that took place years before they were unearthed and reappropriated for propaganda purposes.