A company owned by billionaire and Democratic Party supporter George Soros bought the gun seller Marlin Firearms with plans to shut it down.

In a testament to both the recurring nature of right-wing disinformation and its reliance on billionaire George Soros as a boogeyman, a shoddy claim from 2011 accusing him of wanting to dominate the U.S. firearms market was recycled just four years later to further spread online, and it has lingered around the internet like a bad smell ever since.

The root of the claim is that Soros had acquired The Freedom Group, a.k.a. Remington Outdoor Company, Inc. (ROC) and used it as a way to manipulate the market. One iteration read:

For the last several years a company called The Freedom Group has been buying up gun and ammunition manufacturers. Some of the companies are Bushmaster, Marlin, Remington, DPMS, Dakota Arms and H&R. Some people worry that this Freedom Group is going to control most of the firearms companies in the United States. If you control the manufacturers you can decide to stop selling to civilians. What a perfect way to control guns. Now if you do some digging you will see that The Freedom Group is owned by a company called Cerberus Capital Management. Guess who controls Cerberus??? GEORGE SOROS, Obama’s chief financier!! He wants to restrict or ban all civilian guns.

One version was even posted as a literal document, which also claimed that we had “verified” the story (we had not) and urged readers to “send this to every gun owner”: 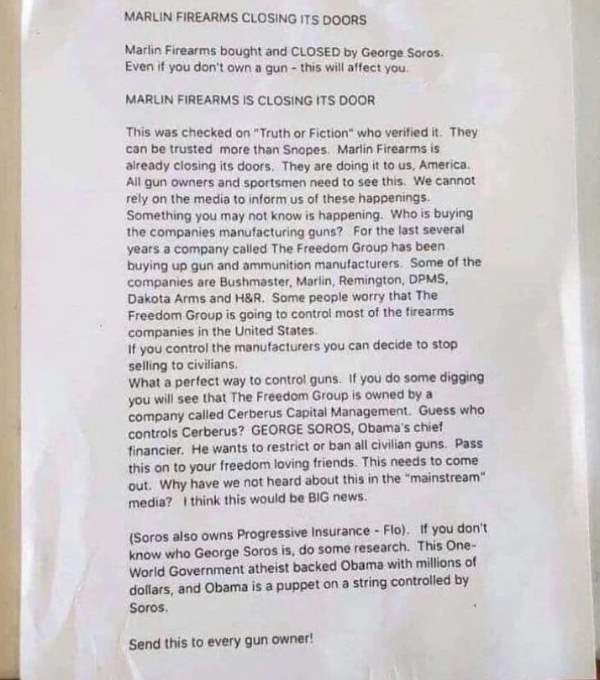 Cerberus Capital Management is a real company and did own The Freedom Group/Remington, but Soros is not listed anywhere on the company’s website.

The Freedom Group/Remington, for its part, did acquire several firearms companies. But this rumor was outlandish enough that in 2012 the National Rifle Association (NRA) published the company’s statement debunking it:

Despite rumors to the contrary, Cerberus Capital Management, L.P., the firm which owns Freedom Group. Inc. (FGI), the holding company for such firearms manufacturers as Remington, Marlin, Bushmaster and DPMS, is in NO WAY affiliated with anti-gun activist George Soros.

George Soros has never been a part of Freedom Group or Cerberus. Further, as Cerberus is a privately owned corporation, run by sportsmen, shooters and firearms enthusiasts, we can say with great sincerity and certainty that George Soros will never be a part of the Freedom Group family of companies.

Cerberus sold The Freedom Group/Remington in December 2012; as the New York Times reported at the time, the sale came after it became public knowledge that a Remington AR-15 rifle was used to kill 26 people in the mass shooting attack against Sandy Hook Elementary in Connecticut that same month:

“It is apparent that the Sandy Hook tragedy was a watershed event that has raised the national debate on gun control to an unprecedented level,” Cerberus said in a statement.

The move by Cerberus is a rare instance of a Wall Street firm bending to concerns about an investment’s societal impact rather than a profit-at-all-costs ethos. Public pension funds like the California one — officially, the California State Teachers’ Retirement System, or Calstrs — have hundreds of billions of dollars in private equity and hedge fund investments. While their influence is vast, it is usually exerted behind the scenes and rarely prompts snap business decisions.

The families of nine of the victims of the Sandy Hook massacre sued Remington, saying that the weaponsmaker’s promotional tactics appealed to potential attackers by using slogans like “Consider your man card reissued” alongside photographs of the weapon.

The families and Remington reached a $73 million settlement in February 2022, by which point Remington had already been divided and sold to seven other companies after filing multiple Chapter 11 bankruptcy claims.

Contrary to the original claim, Marlin Firearms itself was still operating as the disinformation first spread online, although in 2011 that company’s manufacturing plant in Connecticut did shut down, an event that likely played into the claim. In late 2020, however, Marlin was acquired by another firearm maker, Sturm, Ruger & Company (often referred to as Ruger for short.)