Actor Charlie Chaplin once said, "You need power only when you want to do something harmful, otherwise love is enough to get everything done."

The perils of blindly sharing “feel-good” remarks, even when they’re combined with photographs of a beloved celebrity, is evident once again in one of the latest iterations of a graphic falsely quoting actor Sir Charles Spencer Chaplin, best known as the comedian Charlie Chaplin.

A Facebook post published on October 9 2019 features an illustration of the silent film great alongside the statement, “You need power only when you want to do something harmful, otherwise love is enough to get everything done.” It has been shared thousands of times on the platform since it was published: 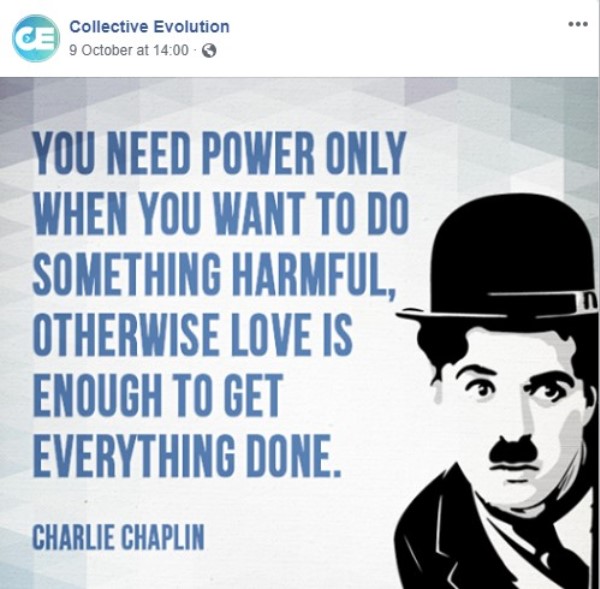 The quote has been spread around various sites, ranging from Goodreads to Pinterest and various blogs, but it never has a citation attached or anything to add context as to where the actor, who died on December 25, 1977, allegedly made the statement.

One site where that quote is not featured, however, is the official Charlie Chaplin website, which represents companies that hold the rights to Chaplin’s films and copyrighted material as well as his family. More specifically, the site also has a section devoted to his more famous remarks from his film catalog, his manuscripts, as well as his interviews.

“As far as we know, Chaplin did not say or write that,” a spokesperson for the site, Kate Guyonvarch, told us. “There is indeed a lot of disinformation online.”

Chaplin was married four times and divorced three — all to women who were in their teens or very early twenties at the time — which indicates that he either fully believed in the power of love to cure all ills or did not believe in love at all. However, he finally appeared to find happiness with his fourth wife, Oona O’Neill, who he met when he was 53 and she was only 18. Despite the age difference (or because of it), they eventually had eight children.