On July 22 2021, the Facebook page “Green New Deal” shared an image and a status update about China’s recent torrential rains:

China received 8 months of rain in just 5 days.
The highest amount of precipitation since the measurements started.
People were imprisoned in the subway with water up to their chests.
There are dead, wounded, missing and a lot of destruction.
Sound familiar?
Congratulations! We have another once in 1000 years event – the third within a month.

Attached was a hazy image of a flooded city road, littered with submerged vehicles: 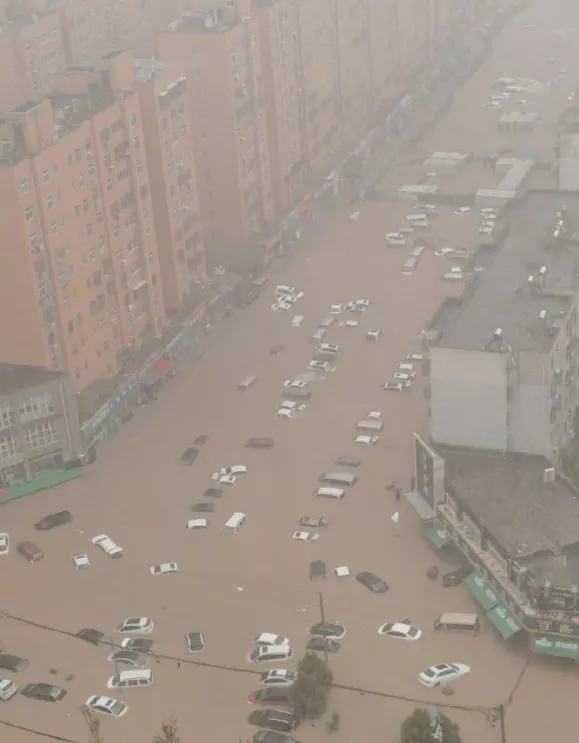 No additional information about July 2021 weather in China or the source of the image was included in the post. The status update also contained the claim that the flooding was “another once in 1000 years event,” “the third within a month” (but didn’t specify the nature of the other two unlikely events).

The images area legitimate. As reporting from July 21 2021 stated, myriad images and videos of the flooding were published to state and social media:

Pictures published by state media [in July 2021] showed large sections of roads submerged in Zhengzhou, a city of 10 million, while videos posted on social media showed passengers stuck inside flooded subway cars with water levels up to their shoulders and residents pulled to safety with ropes from fast moving floodwaters. State news agency Xinhua reported that 12 deaths had been confirmed so far.

The deluge has brought the equivalent of more than eight months’ worth of the city’s average rainfall since Tuesday [July 20 2021], and has already interrupted the operations of at least one global company with manufacturing operations there.

A BBC article reported that the flooding came with a body count:

Video shared on social media shows evening commuters just managing to keep their heads above water. Water is seen rushing onto platforms … In total, 25 people have died in Henan province and more than a dozen cities are affected. President Xi Jinping said on Wednesday [July 21 2021] that there had been “significant loss of life and damage to property”.

In the provincial capital Zhengzhou, the equivalent of a year’s average rainfall has fallen in just three days.

In the Facebook post quoted above, the page said “China received 8 months of rain in just 5 days.” But on Twitter, UN Climate Change described eight months of rain falling not in five days, but in one single day, at least in Zhengzhou:

Dramatic climate impacts continue around the world. Zhengzhou in China has seen the highest daily rainfall since weather records began, receiving the equivalent of 8 months of rain in a single day. #COP26 pic.twitter.com/7dtyHLUD6J

Additional claims in the post were reflected in a July 20 2021 Reuters piece about China’s catastrophic flooding:

The three days of rain matched a level seen only “once in a thousand years”, the Zhengzhou weather bureau said.

Like recent heatwaves in the United States and Canada and extreme flooding seen in western Europe, the rainfall in China was almost certainly linked to global warming, scientists told Reuters.

On July 22 2021, as the body count grew, Yale Climate Connections (YCC, an initiative of the Yale Center for Environmental Communication, YCEC) article noted that “Zhengzhou received more than a year’s worth of rain on July 20 [2021],” and alluded to a possible first and second “once in 1000 years” events:

At least 33 people are dead and 8 missing in Zhengzhou, China, after a July 20 [2021] extreme rainfall event of nearly unimaginable intensity. Zhengzhou, a megacity of more than 10 million – and the world’s biggest manufacturing base for iPhones and a major hub for food production and heavy industry – recorded an astonishing 644.6 mm (25.38 inches) of rain in the 24 hours ending at 21Z July 20 [2021]. This is literally more than a year’s worth of rain: Its average annual precipitation (1981-2010 climatology) is only 640.9 mm (25.24 inches).

The disaster follows on the heels of the extreme rainfall event that killed more than 200 people in Germany and Belgium [earlier in July 2021]. Both disasters have preliminary damage estimates in excess of $10 billion.

A July 22 2021 post by the Facebook page “Green New Deal” shared an image and said that “China received 8 months of rain in just 5 days … another once in 1000 years event – the third within a month.” Although the page did not provide a specific citation for its claims, international news outlets (like the BBC and Reuters, along with UN Climate Change) reported similar figures. On July 22 2021, YCC described Zhengzhou’s single-day rainfall as “literally more than a year’s worth of rain,” a disaster which followed “on the heels of the extreme rainfall event that killed more than 200 people in Germany and Belgium” in July 2021.