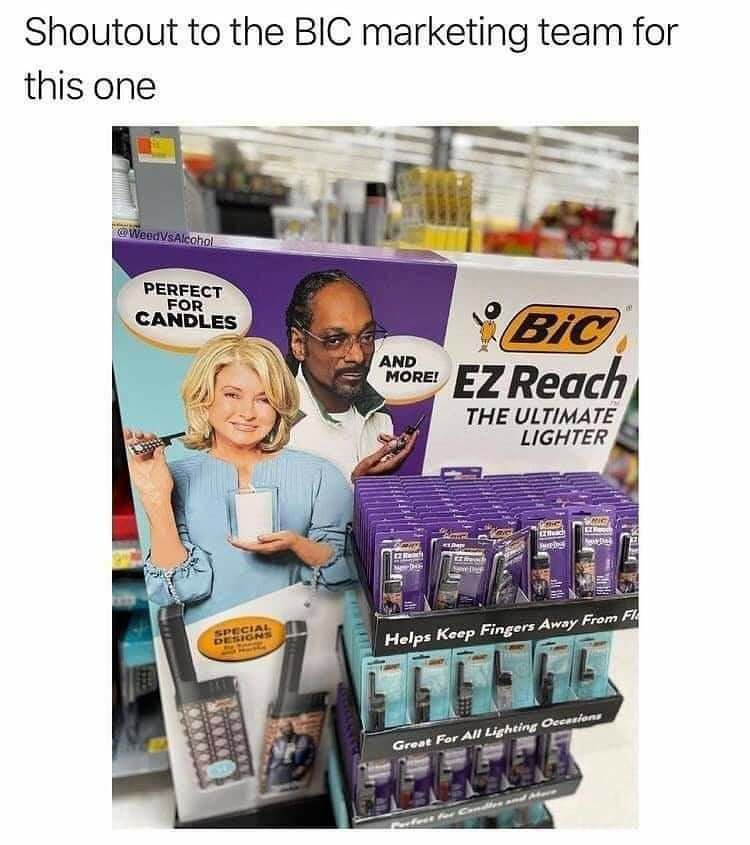 Text at the top read “Shoutout to the BIC marketing team for this one,” and an in-store display depicted Stewart and Snoop. On that display for Bic’s EZ Reach, both celebrities had “speech bubbles”:

Presumably, the meme was popular due to its subtext. Stewart referenced the use of scented candles, while Snoop’s interjection hinted at the use of cannabis.

Conversely, that suggestion was slightly edgy for Bic (also the maker of office supplies), and the meme’s share count suggested not many social media users were aware of the purported advertising campaign. But we didn’t have to go far to determine whether the advertising display reflected an authentic endeavor by Bic.

An Amazon listing for Bic’s EZ Reach lighter included a clearer version of the image in the meme: 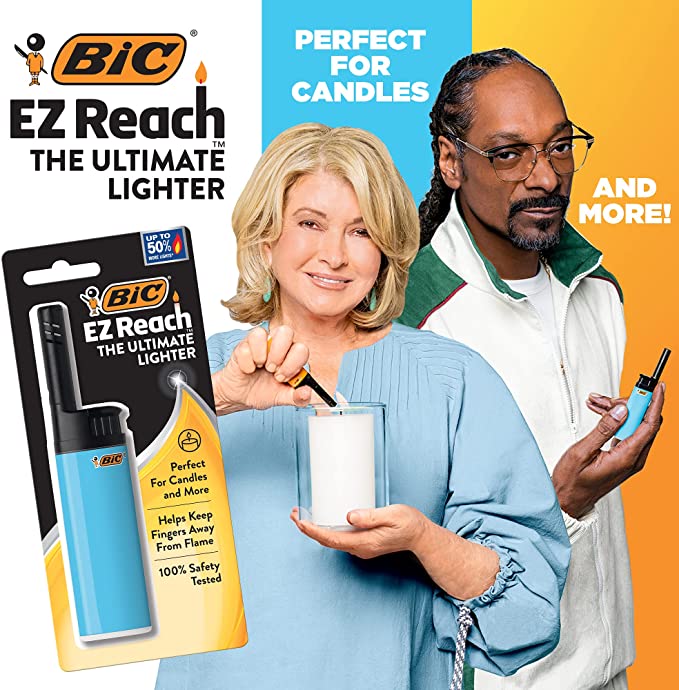 Moreover, Bic shared a video to its YouTube channel in May 2021, “BIC® EZ Reach™ ‘Pass It’ with Snoop Dogg and Martha Stewart,” with commenting turned off. In the thirty-second-long commercial, Snoop asks Stewart to “pass that bowl” (of strawberries); he later asks “do I smell …” to which she replies “fondue time.”

“Our BIC EZ Reach lighter is the ultimate lighter for all lighting occasions, and we thought who better to partner with than this iconic duo who knows all about lighting up candles, grills and more,” said Mary Fox, General Manager of BIC North America. “The new campaign featuring Snoop Dogg and Martha Stewart allows us to connect with our consumers in a relevant and playful way while highlighting all the usage occasions and core benefits that set EZ Reach apart in the lighter category. This is an exciting next step for the BIC EZ Reach Lighter, which has received rave reviews from consumers looking for a lighter that lights hard-to-reach places!”

The new ad “Pass It” features Snoop and Martha relaxing outdoors when Snoop asks Martha to pass him the BIC EZ Reach lighter and a bowl, to which Martha hands him a bowl … of strawberries. Snoop lights a candle using the EZ Reach lighter and questions the smell in the air, which is coming from a fondue pot that Martha lit using the EZ Reach lighter. The ad is available on Hulu, Roku, YouTube, Spotify, Pandora, Facebook, Instagram, Pinterest, Google and other BIC social media channels. A second spot will be released in 2022.

Stewart and Snoop were both quoted in the press release reiterating their loyalty to Bic lighters:

“The BIC EZ Reach lighter offers a solution to the everyday problem of lighting those hard-to-reach places, whether you are lighting candles, entertaining guests outdoors, or adding a finishing touch to that special birthday cake,” said Martha Stewart. “I’m thrilled to partner with BIC to create my own line of beautifully designed and packaged EZ Reach lighters which bring function, innovation, inspiration and beauty into the home and onto the table.”

“As someone who uses a lighter almost every day, having one that’s reliable and safe to use is important, which is why I reach for my BIC EZ Reach whenever I need a lighter,” said Snoop Dogg. “I love working with my friend Martha and we had a lot of fun showing off the many ways the BIC EZ Reach lighter truly is the ideal lighter for all lighting occasions.”

Bic’s Martha and Snoop advertisement was popular in meme format, perhaps more so than as an advertisement. Although the meme was humorous, the same subtext was present in a video of the “iconic duo” published by Bic — and the campaign was both genuine and accurately described.