On July 19 2021, a Facebook user in the group “Creative Gardening” shared their experience with “banana peel water” (also called “banana peel tea,”) including a photograph of their plants, apparently thriving thanks to the purported “gardening hack”:

Hello all. This is my basil and herb garden. I want to share a tip with everyone. I am feeding them with banana peel water. Take 2 banana peels and soak overnight in a gallon of water. Water your plants with the banana peel water. It’s full of potassium and more. You can use it on veggies, flowers, herbs. Does not need to be refrigerated. I keep a jug going all the time and keep adding water as I use it up. I also throw in peels as I eat them. The peels turn brown and you can discard them after you’ve added more peels. It’s a great organic fertilizer. This is good on veggies, herbs, flowers and tomatoes. I am using it on my green pepper too. My spearmint plant is huge as well and so is my dill is waist high. I have tons of green cherry tomatoes and beautiful green peppers. 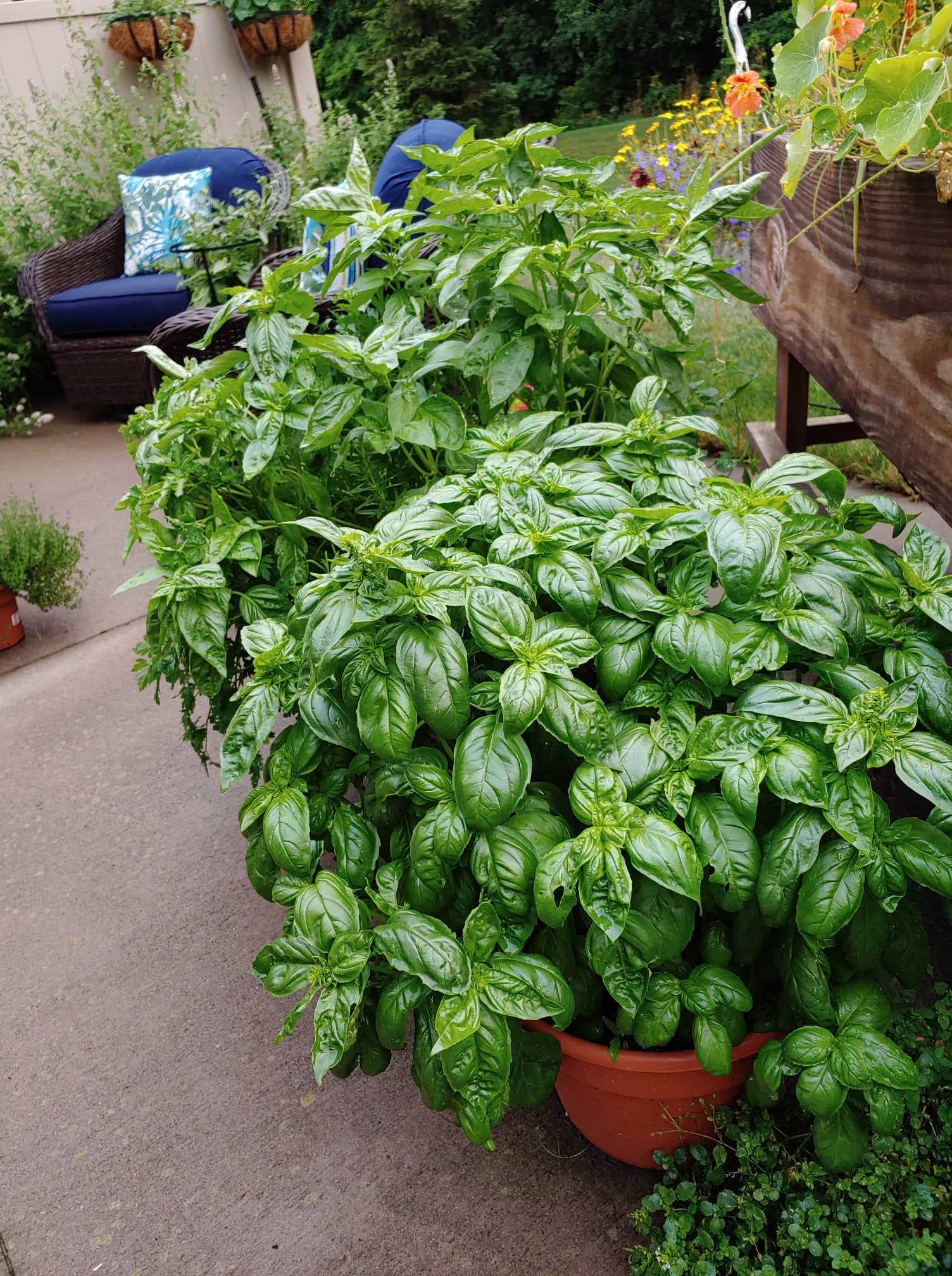 According to the original poster, the impressively robust basil was the result of banana peel water, as were several other plants not pictured. Several commenters said things like “the proof is in the pudding,” but the image and post didn’t depict a “control” plant not provided “banana peel water.”

In the seven-day period ending July 23 2021, Google Trends indicated a surge of interest in related searches:

Images of seemingly impressive results were often convincing (as the high share count showed), and we looked for any corroborating information suggesting that banana peel water or tea was beneficial for home gardens. One of the top results was a University of California Cooperative Extension (UCCE), which referenced the idea that buried banana peels provide potassium to plants:

There are so many sources of unproven information on the Internet, and unfortunately, most garden myths are not supported by science. We certainly don’t want people leaving our presentations believing garden myths that they picked up from another attendee …

Yes, bananas and their peels contain potassium which stimulates plant growth and flower production, however, the amount of nitrogen needed to break down the peel will mean less nitrogen is available for greening plants. What would be beneficial of course, would be to compost the banana peels and top-dress plants with compost instead.

Infusing water with banana peels was not mentioned as a preferential method of encouraging plant growth; a topsoil company similarly dismissed the practice. UCCE linked to two gardening “myth buster” sites, neither of which contained any information about banana peel water.

However, one of the two sites was a University of Washington horticulture resource, and it contained material about the “Myth of Compost Tea” [PDF], reminding readers of the variable nature of such “hacks,” and the possibility of unintended consequences:

One of the biggest problems with compost, and by extension teas and extracts, is the high variability among composts from different sources as well as different batches … With the variability that exists among batches of compost tea, it is difficult to interpret results in any scientifically meaningful way. Some compost teas apparently contain large numbers of beneficial microbes that compete for space on leaves and fruits, denying pathogens space to colonize. Others apparently contain antimicrobial chemical compounds produced through decomposition and inhibit pathogen growth. But in the peer-reviewed literature, the only article I was able to find on field-tested compost tea reported no difference in disease control between compost tea and water.

In addition to the fuzzy science that accompanies compost tea usage, I am also very concerned with the potential high nutrient load when such teas are used as fertilizer. Unlike compost used for mulch, which provides a slow release of nutrients, compost teas most certainly add increased levels of nitrogen, potassium, and other minerals all at once. It is unlikely that these are completely absorbed by the plants and instead may contribute to the eutrophication of watersheds … Compost teas can be overused and potentially contribute to ground water pollution[.]

Although both banana peels and coffee grounds are organic in nature, they can do more harm than good if you just spread them around your plants. That’s because, as they decay, they’ll tie up valuable nitrogen in the soil, depriving your plants of food. It’s fine to use these materials, but be sure to compost them first before spreading in the garden. Read how to feed your plants with the right stuff.

Another gardening blog (LaidbackGardener.com) explained its content was borne of having to watch other people garden while “they waste so much time carrying out useless, barely useful or even harmful tasks.” That site published “Garden Myth: Miraculous Banana Peels” in early 2020, explaining that there are much more efficient ways to enrich soil with potassium:

The common garden myth is that you should “feed” banana peels to your garden plants or even houseplants, either whole or chopped up or turned into banana tea. However, try it and you’ll see. In most cases, if you remove the wishful thinking factor, plants so treated will do no better than other garden plants that didn’t get the treatment.

Yes, banana peels do contain minerals, especially potassium and magnesium, and can be used, once decomposed, to fertilize plants. That sounds promising! However, most garden soils aren’t seriously lacking in potassium and magnesium. Plants will only absorb minerals if they need them, so adding more to a well-stocked soil won’t improve your results … You probably already have fertilizers you could apply that have a decent share of [potassium and magnesium]. Plus, unlike most other plant residues, banana peels contain no nitrogen worth mentioning, and that is the one mineral that really is lacking in most soils. If you “fed” your plants nothing but banana peels, they’d likely be in serious trouble.

In August 2020, BHG.com (the site of the magazine Better Homes & Gardens) addressed the social media popularity of banana peel water and echoed the common qualifier that more traditional fertilizer was likely to be a more stable and effective approach:

You just finished eating a banana for breakfast, or maybe you mixed up the batter for a batch of banana bread, and now you’re left with the peels. You might’ve heard that you can use those peels to help give your houseplants some extra nutrients, either by soaking peels in water you’ll pour in the pots or by burying pieces in the soil. But relying on banana peels to perk up your houseplants isn’t your best bet.

Like any organic material, the peels contain nutrients, including potassium and phosphorous, which are both essential nutrients in fertilizer. However, unless the peels are dried, they’re mostly composed of water (over 80%), which means the amount of nutrients they have in comparison to regular fertilizer is pretty low … If you need to add more nutrients to keep your plants happy, use a commercially packaged fertilizer.

In GardenMyths.com’s post “The Magical Power of Banana Peels in The Garden – Or Not,” banana peel water barely warranted a passing mention:

I have reviewed the value of using left over tea before and this tea would be no different.

There is limited decomposition during the process of making it, which means that most of the nutrients remain in the peels. Potassium leaches out of organic matter more quickly since it is not chemically bound, and banana peels have a higher level of potassium, so the tea might add some potassium, but not much else.

Don’t get conned by tea claims for plants.

Not all those weighing in on banana peel water or tea were avid gardeners. A blogger who experimented with the practice wrote a June 2021 post titled “Please Don’t Make Banana Peel Compost Tea Fertilizer For Houseplants.” According to the review, experiments with banana peel water are not only fruitless — they also led to unwanted outcomes:

As soon as I opened the jars, I didn’t have a warm and fuzzy feeling about the banana peel tea fertilizer. It smelled suspiciously sweet (like it would attract bugs), and the whole process was kind of messy.

Immediately, I noticed stains on several of the leaves of my succulents. While the stains appear to be permanent, they don’t seem to have caused harm. But who wants to stain their beautiful succulents when they water them?

Also, the soil continued to smell like a combination of sweet and somewhat rotting banana peels for many days after watering it. This made me nervous about the lasting effects.

Within just a few days, the real problem began. I started noticing little gnats flying around the soil. I’ve had succulents and several other plants in my home for over a year. I’ve had no persistent issues with bugs in my home… until this banana compost tea situation.

Hindsight is 20/20, but I soon realized that I forgot to research other potential side effects. I started to dig a little deeper into the science behind why banana compost tea might work or not work and found some opinions about its lack of efficacy that were quite compelling.

I threw out the remaining banana peel compost tea and continued watering the plants at regular intervals with tap water. Over the course of a couple of months, however, the fungus gnat problem grew, and they began spreading through the rest of our house.

Little gnats flew into our faces while on Zoom conference calls. They buzzed in our ears as we fell asleep at night. They even showed up in our bathroom, and are flying in my face as I write this post. It’s gross! And now I don’t know how to get rid of them.

Noting that potatoes and beans have more potassium than bananas, the writer added:

Researchers indicated the results were similar to outcomes from eggplant:

Several gardening and horticulture sites addressed popular folk gardening claims about banana peel water or banana peel tea to nourish plants, rarely finding merit in the practice. Although the potential downsides to the practice (mess, affecting groundwater) were broad enough to not deter people, we found no compelling indication that banana peel water was particularly beneficial. Academic sources and gardening sites typically considered the practice pointless at best, and advised the use of well-balanced fertilizer for optimal plant health.