In Netflix's Watts murders documentary American Murder, neighbor Nate Trinastich's Ring camera footage was followed immediately by the display of a fetus and a "skull in oil," a creepy coincidental airing of an AHS spot.

Netflix’s American Murder documentary was popular enough in October 2020 to generate a storm of conspiracy theories, and among widely-discussed elements was a purported “coincidence” during which Chris Watts is questioned by police — and broadcast television playing in the background displayed a “fetus,” a skull, and oil:

On October 11 2020, the above user shared a screenshot of images and wording matching a less widely-shared post. Text on the image read:

Chris Watts stood next to the TV while the police questioned him. As they chatted a fetus, then a skull floating in oil flashed on TV. Crazy coincidence? His wife Shannan was pregnant and he put his two daughters in an oil tank. If you believe in paranormal stuff, was it Shannan giving the cops clues? Or was this just one big coincidence? Kinda creepy either way you think about it.

In an appended status update, the user wrote:

I noticed this too (the fetus not the skull so I went and rewatched to check & it’s there too!).

*yes it’s real, you can go and watch the entire scene for yourself
*no, it’s not photoshopped or a conspiracy
*yes I am aware that it’s advertisements and the skull one is for AHS (not random flashing images, the photo is just poorly worded)
*I posted because it’s an eerie/strange/creepy coincidence (or a paranormal sign if you are into that sort of thing)

Although American Murder had only been streaming for about two weeks at the time the post began spreading, this rumor was not the first about a “creepy coincidence” or “paranormal activity” in the documentary.

On October 9 2020, we addressed a separate viral rumor of a “ghost” purportedly spotted in the first ten minutes of the documentary. Nickole Atkinson, a friend of victim Shannan Watts, explained that the “ghost” was, in fact, her living daughter Madison:

In discussions about the American Murder “ghost” video, separate discussion about the fetus/skull/oil portion occasionally occurred, but the two segments were largely related by chronology.

In our October 8 2020 fact check, we referenced a YouTube video (“Police bodycam footage in Chronological order the day Chris Watts’ family were reported missing”) clocking in at two-and-a-half hours long and including far more of the police body camera video from August 13 2018 — the day Shannan Watts and her daughters Bella and CeCe were reported missing.

Just after the 45-minute mark, Chris Watts and a police officer enter the home of neighbor Nate Trinastich, whose Ring camera footage captured activity outside the Watts’ home on the morning Watts and her children were reported missing. In that portion of the footage, Trinastich explains to the officer that his Ring camera records motion and movement, and that it captured Watts at 5:17 AM local time. The footage plays on the neighbor’s television.

As Trinastich locates the relevant clips, Watts frequently looks away from the screen or at his phone, but occasionally turns his attention to footage of his truck. Watts, Trinastich, and the responding/recording officer are frequently quiet as the footage plays, and Trinastich elaborates on the scope of the recordings from his security camera.

Around 48:10, the officer informs Watts that someone — presumably another officer — has arrived; Watts points and asks if they can “go,” or leave his neighbor’s house. The officer seems to indicate they should watch additional footage, and Trinastich maintains that his camera ought to have shown Shannan walking out of the house on his video — an early hint that Shannan Watts did not leave the house of her own accord or by choice.

At 48:49, the footage switches from Ring camera records to broadcast television, specifically National Geographic. At that juncture, following a National Geographic logo, the screen begins displaying the imagery described in the Facebook post — a fetus, a skull, and oil: 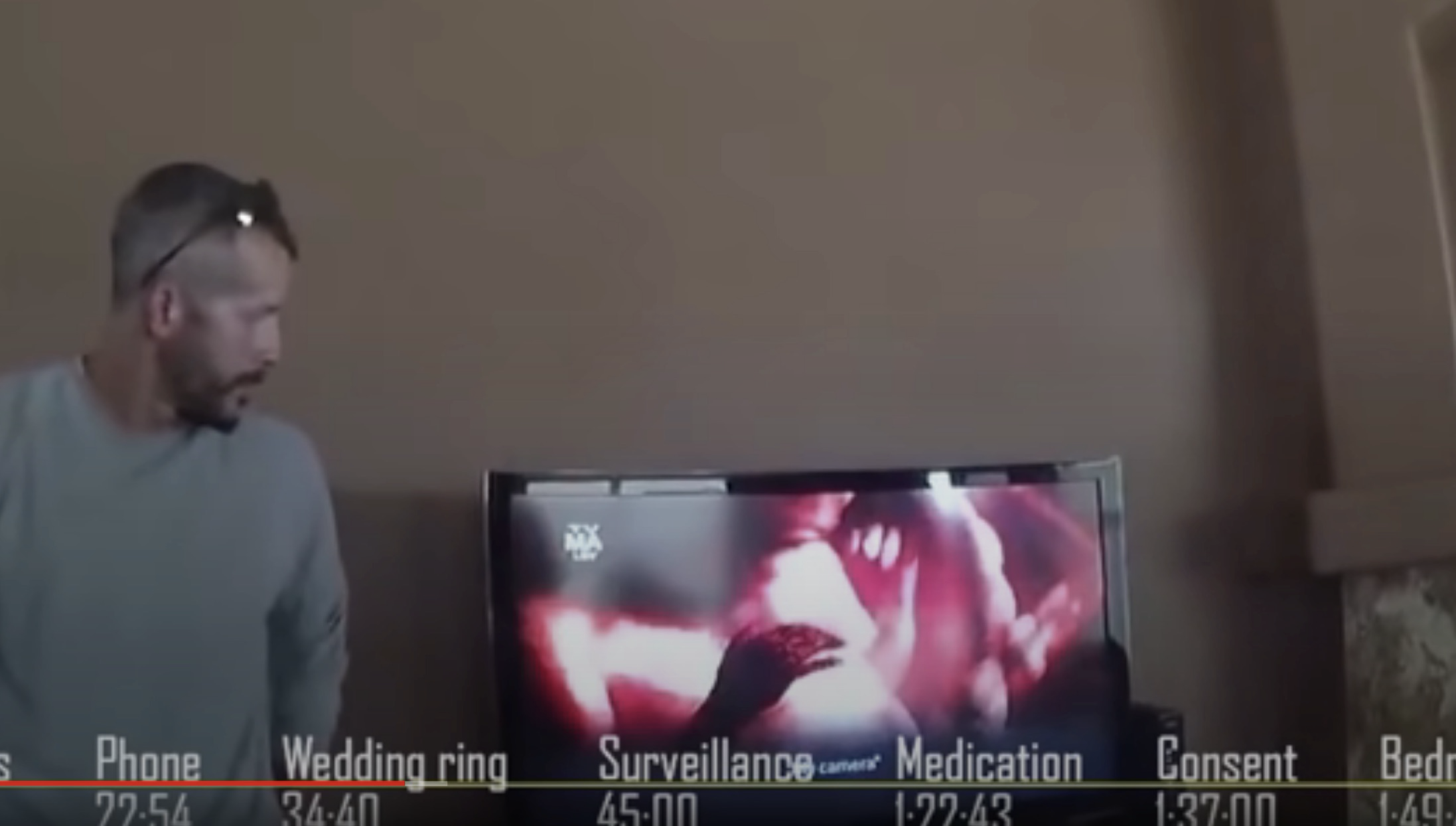 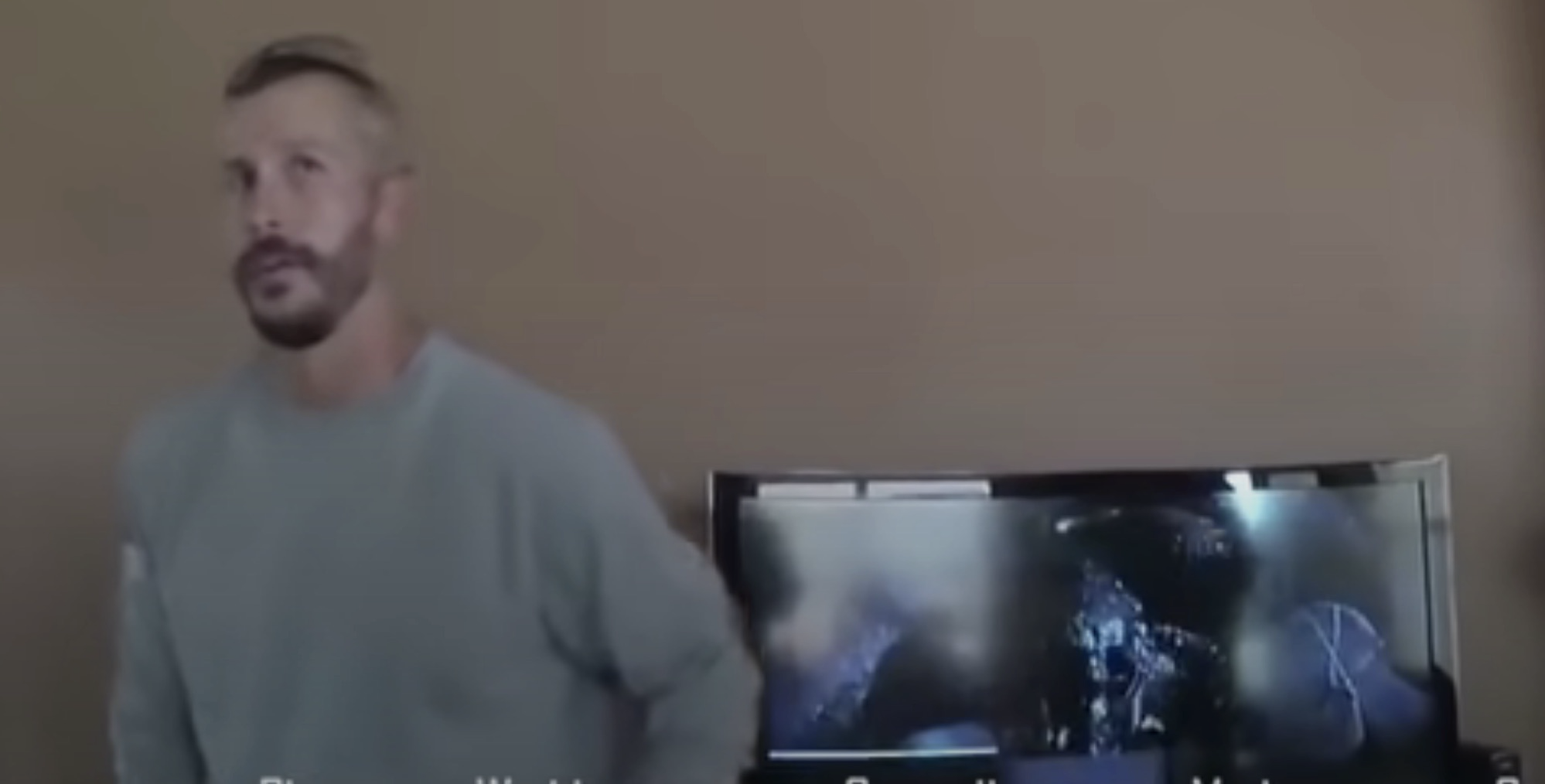 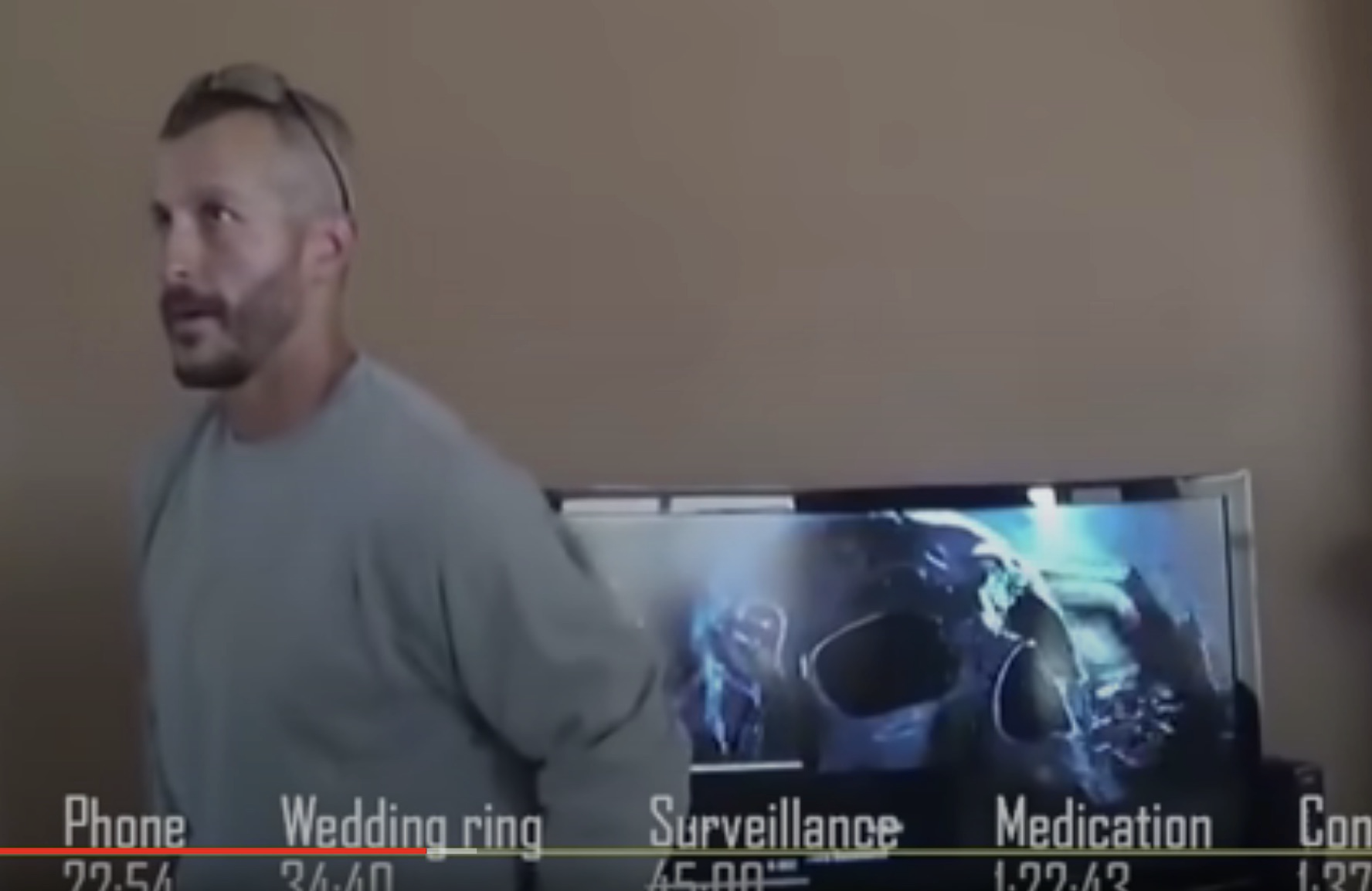 Watts clearly noticed the series of images, because at 48:52, he says:

Watts appears to be eager to leave Trinastich’s house, pacing as his neighbor searches for additional relevant footage. At around 53:30, Trinastich indicates the viewed footage was likely everything relevant captured by his camera, and Watts seems relieved there is no more footage to view.

Watts then shakes hands with Trinastich and hastily leaves; the officer with the body camera directs Watts to meet another officer while he “gets [the neighbor]’s info real quick.” After Watts exits, Trinastich’s loud whispering is captured by the police officer’s camera.

Although not all of Trinastich’s remarks are audible, he clearly has been hoping to speak with the police in Watts’ absence. As soon as Watts disappears through the doorway and is out of earshot, Trinastich says of Watts:

He’s not acting right at all. He’s never fidgety … he’s never rocking back and forth, and if you look [points at television], he never loads his stuff in and out of the garage ever.

Trinastich then replays some of the clips, disclosing to the officer that he believed Watts’ movements on the morning of August 13 2020 were suspicious. Trinastich then highlights segments of the video that appear questionable to him, describing how Watts’ actions differed from the norm.

Trinastich then informs the officer that he and his wife were suspicious about Shannan Watts’ recent vacation due to loud and violent altercations they overheard:

And to be completely honest with you, my wife and I were kind of wondering when she was on vacation if something happened, because I’ve heard them full out screaming at each other at the top of their lungs and he gets crazy … I’m guessing why that’s why she went to visit [people], because she wanted to get away from the situation.

Earlier Interest in Trinastich’s Ring Footage and the Source of the Fetus, Skull, and Oil Video

A January 2019 YouTube video called “A Sign From Shanann? or An American Horror Story” was published more than a year and a half before Netflix premiered American Murder.

In July 2020, a post to r/Chriswatts also addressed the unsettling coincidence:

During the time Chris Watts neighbors was asked to review security footage, a random ad with a fetus and a skull melting into oil is played, eerily similar to Watt’s pregnant wife and where he buried his dead daughters in an oil field. from Chriswatts

Theres So So much more to that video clip. Theres the baby in the womb & then the womb turns into a black heart ,an explosion at a piece of land eerily similar to where he submerge his daughters into the cruelest conditions ,then a woman & man lay dying in a shallow grave & then a skull in thick black oil. This was the universe, somehow advocating for Shanaan and her 3 children.

As for the footage, a similar promotional video titled, “American Horror Story: Apocalypse | Season 8: Hourglass Teaser | FX” was uploaded by FX Networks on August 6 2018. When comments were sorted by “Most Recent,” the majority noted they sought out the advertisement after watching American Murder on Netflix: 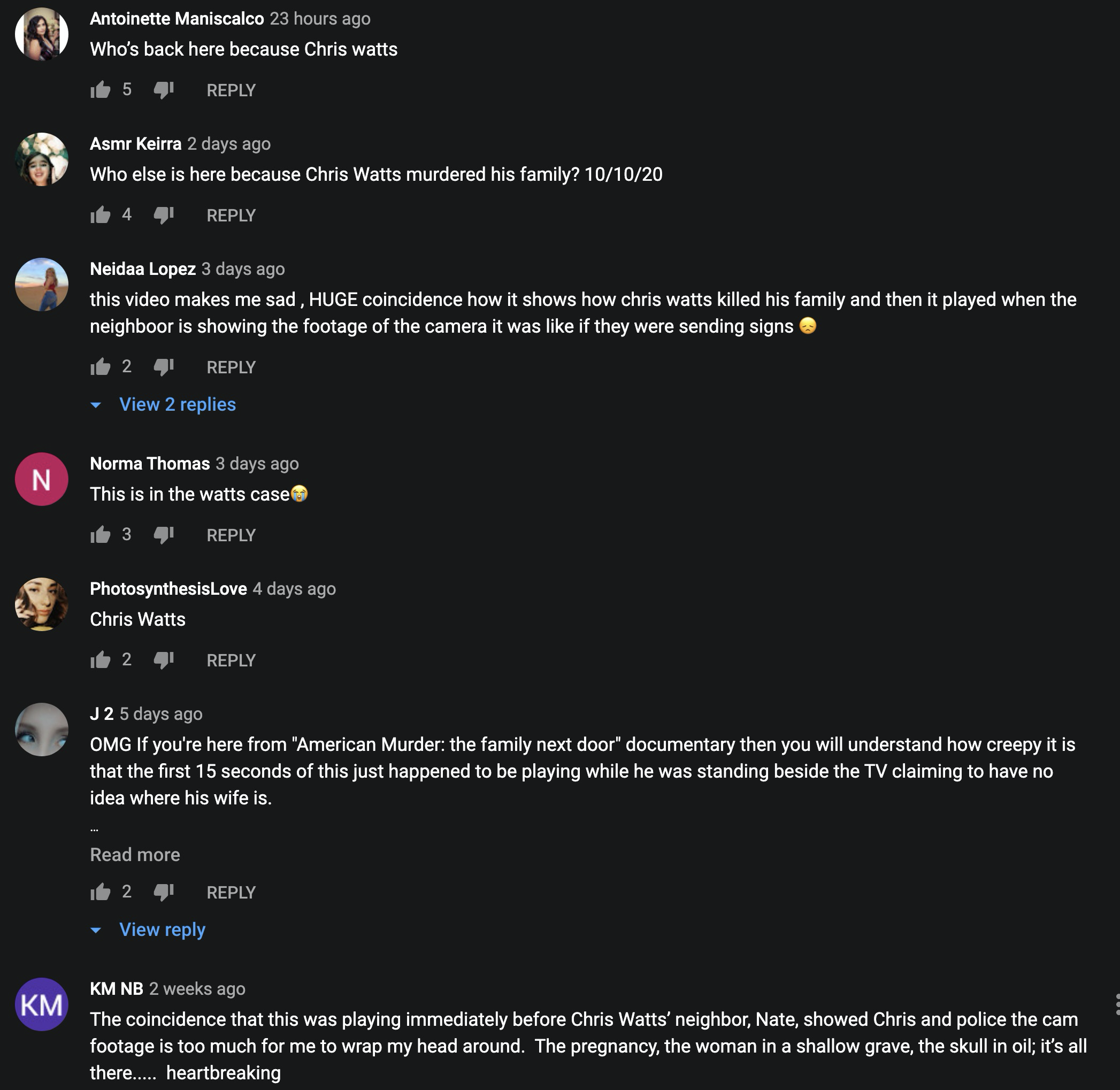 OMG If you’re here from “American Murder: the family next door” documentary then you will understand how creepy it is that the first 15 seconds of this just happened to be playing while he was standing beside the TV claiming to have no idea where his wife is.

For context anyone who hasn’t seen the documentary: Chris Watts suffocated his wife, Shanann, and daugters, Bella and Celeste (ages 3 & 4), in August 2018 in Colorado so he could run off with his mistress. He hid their bodies in giant oil tanks where he worked. He was arrested and charged and is now serving life in prison.

During the documentary (around 13 minutes) it shows Chris from a policeman’s body cam footage. They are at Chris’ neighbors, as they had a security camera and are trying to see if there is anything suspicious (he was claiming to not know where they were at the time). While the footage is loading on the TV, it cuts back to regular programming for 10 seconds. What is shows is this, from 0:05-0:15 and it is honestly chilling. I can’t stop thinking about it. It shows the fetus being blown up as the heart attached to it exploded (aka the mom being killed) and then shows oil seeping out of a skeleton?!!? SERIOUSLY, what are the chances that in the 10 seconds it took for the camera to load that THIS is what it shows. There’s no way this is just a coincidence. It’s like the universe was trying to tell us something.

Watch the documentary if you haven’t it’s very disturbing. Many said they cried; while I am usually a big cryer, I have just felt sick for days instead.

Underneath that, another remarked:

The coincidence that this was playing immediately before Chris Watts’ neighbor, Nate, showed Chris and police the cam footage is too much for me to wrap my head around. The pregnancy, the woman in a shallow grave, the skull in oil; it’s all there….. heartbreaking

As the clip began to air, Chris Watts informed the officer that his wife Shannan was pregnant, information that they likely had from Atkinson’s initial report.

What was not known during the coincidental appearance of the AHS: Apocalypse commercial during the first hours of the investigation was first that all three missing people — Shannan, Bella, and CeCe — were dead. That alone would make the appearance of a skull “creepy.”

On top of that, Watts had hidden the bodies of the two children in separate oil tanks at a job site before burying his wife’s remains in a shallow grave nearby:

[Watts] strangled Celeste first, wrapping her head with a blue Yankees blanket and covering her mouth and nose with his hands through the fabric. Bella was sitting next to her in the backseat the whole time, but didn’t say anything, Watts said.

After Celeste stopped breathing, he dumped her body into an oil tank, feet first, locked the hatch, and walked back to his truck.

“Is the same thing gonna happen to me as Cece?” Watts recalled Bella asking softly when he returned.

That’s when he said he grabbed the same blue blanket, put it around Bella’s head, and “did the same thing.”

“Daddy, no!” were the last words she said before dying, words he still hears whenever he shuts his eyes, Watts told investigators.

He then carried [Bella] to a separate oil tank, manipulated her body so it would fit inside, and locked it.

Shannan Watts’ father Frank Rzucek later disclosed that Watts’ placement of the girls’ bodies in oil tanks also created logistical difficulties in providing a proper burial after they were recovered:

The hardest thing was flying them here, because they were in crude oil for four days, so they were flammable. So we couldn’t cremate them. They would have blown up a building … They had to have a bigger coffin and then they had to seal it with a certain wrap, so the gasses wouldn’t leak out. That’s pretty sad, isn’t it? So we three here never got to say good-bye to our family or see them.

A popular Facebook post noted that “Chris Watts stood next to the TV while the police questioned him, and “a fetus, then a skull floating in oil” eerily, organically appeared on broadcast television. All of those claims were true, and the portion appeared in American Murder. As Watts was questioned and after Trinastich played his security footage, the screen switched to an AHS: Apocalypse advertisement — showing a fetus, a skull, and a skull floating in oil. It was not manipulated or digitally edited, but given that the show was popular and heavily advertised at that time, it was not as remarkable as a coincidence as it may appear at first blush.