California police sent a mailer urging voters not to support a statewide proposition "for racial equality."

A photograph of an advocacy group’s voter guide drew widespread attention on Twitter on October 7 2020 for bringing back to light a recurring nuisance for California voters.

Scott Zabielski’s post showing the state ballot recommendations from “COPS Voter Guide,” listing what the group calls “2020 priority propositions.” Among them is a recommendation to vote “no” on Proposition 16, which is described as being “for racial equality”:

Zabielski’s tweet has been shared more than 53,000 times and highlighted (or “liked”) nearly 224,000 times on the platform. But the details behind both the guide and Prop. 16 might have been lost on some readers.

The bill calls for the repeal of Proposition 209, a measure passed in 1996 that banned the use of affirmative action measures by California’s public institutions. According to a 2015 study by the advocacy group the Equal Justice Society, businesses owned by women and people of color lost around $820 million annually as a result of the legislation.

A separate report published in August 2020 by the University of California Office of the President, enrollment by underrepresented groups fell at both the UC system’s Los Angeles and Berkeley campuses by “more than 60 percent” and by 12 percent across the statewide system.

The mailer also requires readers to read carefully to confirm that the “COPS Voter Guide” did not originate with police. As KBAK-TV in Bakersfield reported in 2018:

The fine print reads, “This organization does not represent any public safety personnel,” and “appearance is paid for and authorized by each candidate and ballot measure.”

The same disclaimers — particularly the disclosure that candidates and ballot proposals pay to be included in the “voters guide” — were covered in a Modesto Bee story two years earlier. The newspaper also reported that the group’s acronym came from its onetime affiliation with an actual law enforcement group, the California Organization of Police and Sheriffs, before taking on its current form:

The guide rakes in millions of dollars statewide by selling advertisements under the guise of “endorsements,” and is just one of many slate mailers operating legally in the state and targeting specific groups of voters.

The small print on this one tells voters who have great eyesight or trifocals that COPS Voters Guide Inc. is not an official political party organization, that it doesn’t “necessarily imply endorsement of others appearing in this mailer, nor does it imply endorsement, or opposition to, any issues set forth in this mailer.”

A photograph of the 2020 “voters guide” circulating on Reddit shows the same disclaimers at the bottom of the group’s recommendations: 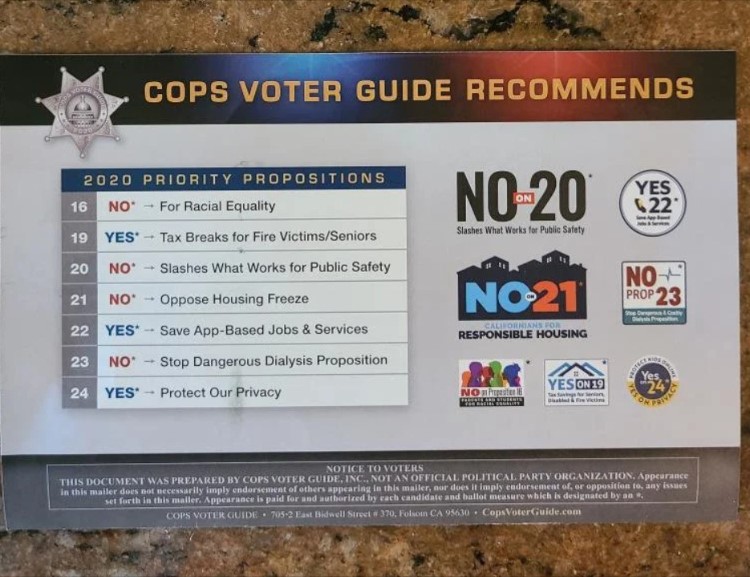 However, those disclaimers do not appear on the COPS Voter Guide website, which instead touts the group as “a non-partisan, public advocacy organization,” as well as the group’s director, Kelley Moran. But Moran does not appear in the organization’s May 2020 filing with the California Secretary of State office. Instead, Michael Shimpock is listed as director and chief executive officer. Shimpock’s LinkedIn profile lists his expertise as “campaign and public communications strategy and execution.”

Shimpock made news around Long Beach, California in 2014, when he took responsibility for a botched mailer promoting then-state Assemblywoman Bonnie Lowenthal’s campaign to be the city’s mayor. The mailer reportedly said that Lowenthal was “getting things done for Long Beach,” but used a photograph for San Diego, an entirely different city more than a hundred miles south. Lowenthal’s campaign was unsuccessful.