The 1918 influenza pandemic was called the "Spanish Flu" because it emanated from Spain.

As United States President Donald Trump and his supporters continued to try to normalize xenophobic rhetoric surrounding the COVID-19 pandemic, GOP Sen. Chuck Grassley of Iowa came under criticism online for his own effort.

“I don’t understand why China gets upset [because] we refer to the virus that originated there [as] the ‘Chinese virus,'” he wrote on Twitter. “Spain never got upset when we referred to the Spanish flu in 1918 & 1919.” 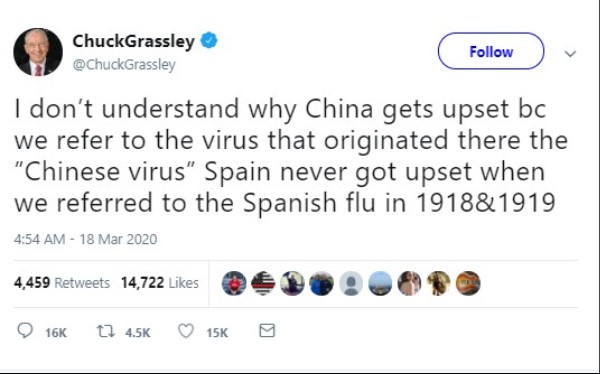 Grassley was hit with thousands of responses in a Twitter phenomenon commonly called “the ratio,” with many of the replies correcting him on the origin of the 1918 pandemic’s name.

In reality, the “Spanish flu” — a strain of H1N1 influenza — was not first detected in Spain. As sources ranging from the Centers for Disease Control (CDC) to the Journal of Translational Medicine have identified the midwestern United States as the likely starting point for the disease. According to a 2004 study published in the journal:

If the virus did not originate in Haskell, there is no good explanation for how it arrived there. There were no other known outbreaks anywhere in the United States from which someone could have carried the disease to Haskell, and no suggestions of influenza outbreaks in either newspapers or reflected in vital statistics anywhere else in the region. And unlike the 1916 outbreak in France, one can trace with perfect definiteness the route of the virus from Haskell to the outside world.

In February 2018, the The Wichita Eagle, the state’s largest newspaper, published a report commemorating the centennial of the outbreak:

No one knows for sure what farm, what family may have first fallen ill. The community was most likely Santa Fe, now a ghost town in Haskell County, says Darlene Groth, curator at Haskell County Historical Society in Sublette.

What is known is that a Kansas country doctor — Dr. Loring Miner, who practiced in Haskell County — became concerned when he noticed this three-day flu wasn’t typical. It was an “influenza of the severe type,” he wrote, and hit young, strong and otherwise healthy people the hardest. He was the first to report to Public Health Reports — a publication of the U.S. Public Health Service — that this flu was a killer.

Furthermore, several reports have verified that the disease’s enduring nickname was derived from one of the few sources of coverage it received during World War I. According to a 2019 study published in the Journal of Preventive Medicine and Health, reports out of Spain were a function of its remarkably free press, relative to news organizations in other countries:

As Spain was neutral in the First World War, newspapers there were free to report the devastating effects that the 1918 pandemic virus was having in that country. Thus, it was generally perceived that the pandemic had originated in Spain, and the infection was incorrectly dubbed “Spanish flu”. During the fall of 1918, the front pages of Spanish newspapers were filled with the names of those who had died of the pandemic in the country.

In other European countries, however, the press refrained from reporting news of the spreading infection, in order to avoid alarming the general population, which was already suffering the privations caused by the First World War. On 22nd August 1918, the Italian Interior Minister denied the alarming reports of the spread of the flu pandemic, and in the following months, both national and international newspapers followed suit. Nor was censorship restricted to news of the spread of the fearsome infection; it also extended to information and comments that contrasted with the official versions of the nature of the disease.

In order to avoid public alarm, several local hygiene authorities refused to reveal the numbers of people affected and deaths.

Grassley’s tweet is part of a larger wave of xenophobic and racist remarks that right-wing politicians and outlets have churned out in an apparent attempt to blame China for the virus outright and change the national narrative, defying the process the World Health Organization went through in designating the disease behind the 2020 pandemic as COVID-19.

“We had to find a name that did not refer to a geographical location, an animal, an individual or group of people and which is also pronounceable and related to the disease,” WHO director general Tedros Adhanom Ghebreyesus said according to the New York Times. “Having a name matters to prevent the use of other names that can be inaccurate or stigmatizing.” 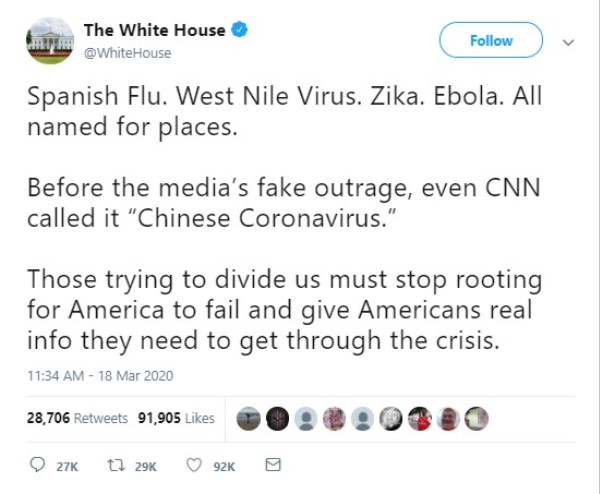 But as CNN reported, the shift was sudden; Trump only began using this particular descriptor for COVID-19 on March 16th 2020:

Trump only started calling the “Chinese Virus” within the last two days.

Between January and March 15th, he referred to it as the “coronavirus”, at least on Twitter anyway, 41 times.

Since March 16th he hasn’t called it the “coronavirus” once. pic.twitter.com/luucCArdjA

As often happens, the political demonization dovetails with public discrimination. Reported attacks against people of Asian descent have increased both in the United States and internationally.