Sailor and explorer Christopher Columbus proved the earth was round.

In October 2019, a number of memes about the legacy of Italian explorer Christopher Columbus circulated on Facebook around Columbus Day, among them a meme about the claim that he “proved” that Earth is round: 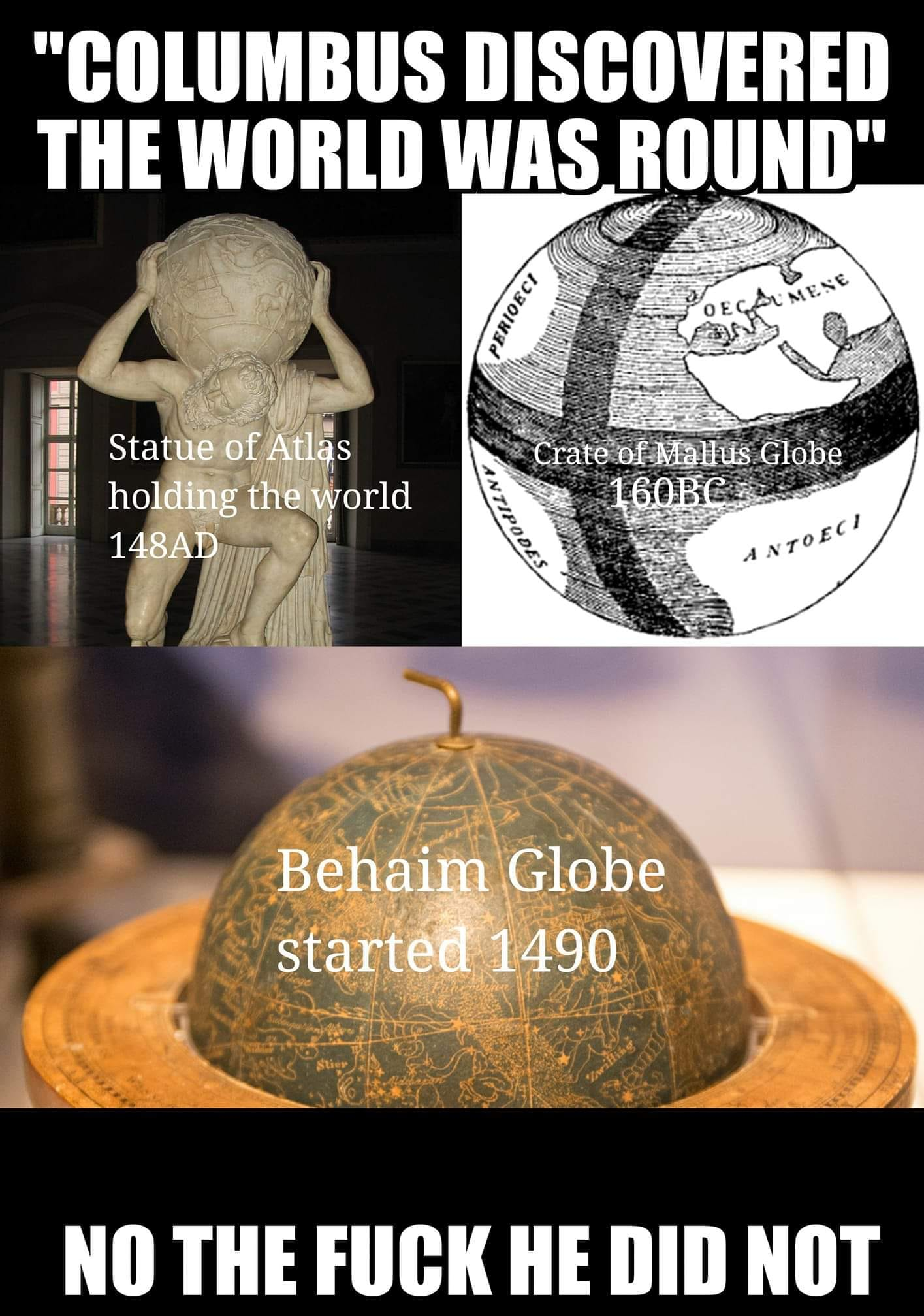 In the above meme, the top and bottom text read:

Clockwise from the top left, three images including spherical globes were captioned:

The first image at the middle top left appeared to show Greek titan Atlas, represented, as he frequently is, in his now-familiar position “with bent knees and back, straining to hold the globe on his shoulders.” Depictions of Atlas date back to at least six centuries before the current era, or BCE, and the precise year labeled in this image is 148 BCE.

Atlas as seen in this particular meme is a work known as the Farnese Atlas, dated to around 150 BCE. Although experts still dispute its precise age, it came from well before the time of Columbus.

Next. the meme cites the “Crate of Mallus globe” from 160 BCE; Crates of Mallus was a philosopher and grammarian in ancient Greece. Crates devised one of the earliest, if not the earliest, known spherical model of the Earth (also known as a globe) around 150 BCE, fairly close to the meme’s representation.

Third cited by the meme was “Behaim Globe,” started presumably in 1490 CE. Also known as “Erdapfel,” or “Earth Apple,” the artifact (dated coincidentally to 1492) is believed to be the earliest surviving actual globe:

Also called the Behaim Globe, the construction of the Erdapfel is credited to the 15th century polymath Martin Behaim. Behaim, a German, was a well-known geographer, merchant, mariner, and philosopher. It was after his travels across the Known World, to places such as Portugal and the West Coast of Africa, that he returned to his native Nuremberg, where he convinced the city council of his hometown to commission a globe from him.

All three of the images are roughly correct, if possibly off by a few years across the millennia. But the meme’s central claim was that contrary to history lessons trotted out every October in schools throughout the United States, Christopher Columbus didn’t actually “prove the Earth was round” or disabuse sailors of their fear that their ships would plummet off the edge of a flat ocean should they travel too far.

Widely repeated claims that Christopher Columbus “prove” that the world is spherical were addressed in Jeffrey Burton Russell’s 1991 book Inventing the Flat Earth: Columbus and Modern Historians.  In his book. Russell described a push — predominantly between 1870 and 1920 — to rewrite history by advancing the idea that people in the Middle Ages were ignorant of a spherical planet. He said in a 1997 talk on the same subject:

Historians of science have been [attempting to debunk the myth of widespread belief in a flat Earth] for at least 70 years (most recently Edward Grant, David Lindberg, Daniel Woodward, and Robert S. Westman), without making notable headway against the error. Schoolchildren in the US, Europe, and Japan are for the most part being taught the same old nonsense. How and why did this nonsense emerge?

In my research, I looked to see how old the idea was that medieval Christians believed the earth was flat. I obviously did not find it among medieval Christians. Nor among anti-Catholic Protestant reformers. Nor in Copernicus or Galileo or their followers, who had to demonstrate the superiority of a heliocentric system, but not of a spherical earth. I was sure I would find it among the eighteenth-century philosophes, among all their vitriolic sneers at Christianity, but not a word. I am still amazed at where it first appears.

No one before the 1830s believed that medieval people thought that the earth was flat.

The idea was established, almost contemporaneously, by a Frenchman and an American, between whom I have not been able to establish a connection, though they were both in Paris at the same time. One was Antoine-Jean Letronne (1787-1848), an academic of strong antireligious prejudices who had studied both geography and patristics and who cleverly drew upon both to misrepresent the church fathers and their medieval successors as believing in a flat earth, in his On the Cosmographical Ideas of the Church Fathers (1834). The American was no other than our beloved storyteller Washington Irving (1783-1859), who loved to write historical fiction under the guise of history. His misrepresentations of the history of early New York City and of the life of Washington were topped by his history of Christopher Columbus (1828). It was [Irving] who invented the indelible picture of the young Columbus, a “simple mariner,” appearing before a dark crowd of benighted inquisitors and hooded theologians at a council of Salamanca, all of whom believed, according to Irving, that the earth was flat like a plate. Well, yes, there was a meeting at Salamanca in 1491, but Irving’s version of it, to quote a distinguished modern historian of Columbus, was “pure moonshine. Washington Irving, scenting his opportunity for a picturesque and moving scene,” created a fictitious account of this “nonexistent university council” and “let his imagination go completely…the whole story is misleading and mischievous nonsense.”

Russell was disputing a myth within a myth, the belief that Columbus had bravely sought to disprove a prevailing scientific and geographic notion in his time within the larger story of the explorer’s role in history. He cited academic Antoine-Jean Letronne as one of the higher-profile anti-religious scholars to develop and promulgate the story as part of a larger effort to link religion and religious leaders of Columbus’ time with ignorance and hostility to scientific notions.

Russell also pointed to author Washington Irving as an originator of the tale, thanks to Irving’s described penchant for blending “historical fiction” with history under the auspices of strictly authoring history. Russell described Irving’s claims about Columbus and a flat-earth belief as “misleading” as well as “mischievous nonsense.”

In that 1997 talk, Russell concluded by arguing that the creation of the myth of flat Earth belief in the Middle Ages was really about a dispute over evolution, an allegory intended to cast doubt on creationists:

The reason for promoting both the specific lie about the sphericity of the earth and the general lie that religion and science are in natural and eternal conflict in Western society, is to defend Darwinism. The answer is really only slightly more complicated than that bald statement. The flat-earth lie was ammunition against the creationists. The argument was simple and powerful, if not elegant: “Look how stupid these Christians are. They are always getting in the way of science and progress. These people who deny evolution today are exactly the same sort of people as those idiots who for at least a thousand years denied that the earth was round. How stupid can you get?”

As RationalWiki notes, both Letronne and Irving died before Darwinism was introduced. Letronne died in 1849 and Irving in 1859; Charles Darwin’s On the Origin of the Species was first published in 1859.

History.com also identifies Letronne and Irving in advancing the myth, but posits that mischievousness and creative license (not a smear campaign against Darwin’s then-nascent theory) was the culprit in Irving’s case:

That was thanks to scientists, philosophers and mathematicians who, as early as around 600 B.C., made observations that Earth was round. Using calculations based on the sun’s rise and fall, shadows and other physical properties of the planet, Greek scholars like Pythagoras and Aristotle determined that the planet is actually a sphere … The myth of Columbus’ supposed flat earth theory is tempting: It casts the explorer’s intrepid journey in an even more daring light. Problem is, it’s completely untrue. The legend doesn’t even date from Columbus’ own lifetime. Rather, it was invented in 1828, when Washington Irving published The Life and Voyages of Christopher Columbus.

Irving, a master storyteller, was already famous for tales like “Rip Van Winkle” and “The Legend of Sleepy Hollow” when he tackled the life of Columbus. His inspiration came after his friend, Alexander Hill Everett, the United States’ minister to Spain, invited Irving to stay with him in Madrid. While visiting the city, Irving was tempted by a giganticarchive of documents about Columbus and decided to write the explorer’s biography.

The archive may have been extensive, but Irving couldn’t help from adding fictional flourishes to Columbus’ already fascinating life. Crucially, he claimed that when the explorer told Spanish geographers the earth was not actually flat, they refused to believe him, even questioning his faith and endangering his life.

As that article noted, there was a dispute between Columbus and his financiers about his proposed voyage. But it didn’t involve a widespread belief the world was flat; rather, it was over an ongoing debate about the length of the route and the general distances between land masses.

A careful reading of history has always shown that humans acknowledged the Earth’s spherical nature before the Middle Ages, and even in antiquity. But it doesn’t prevent folklore about Columbus’ motivations from infecting lessons and talks about the science of previous eras. In 2014, historian Darin Hayton referenced writings and remarks by astronomer Chris Impey and writes:

More recently still, Chris Impey, an astronomer at University of Arizona who claims to be interested in and knowledgable about history, fell prey to the Columbus myth in a lecture posted on YouTube, “Ancient Astronomy.”  … [Impey] underscores this claim in his video series “Teach Astronomy” (which is part of an online textbook). In the section on “The Dark Ages” he says:

In the fourth century with the fall of Rome and the sacking of the great library at Alexandria scientific darkness fell across Europe. Even the language of learning, Latin, splintered as warring tribes took over. The theology of the day was defined by Augustine, and the Christian church was mostly anti-science. The learning of the Romans and the Greeks was denigrated as pagan knowledge. Even the knowledge of the round Earth was lost for many centuries.

Impey’s comments reveal, I think, the power of the Columbus myth. It has become so central to the idea of modernity, that even a self-described student of history who is both smart and very educated — part of the “educated extreme” — is not motivated to do a simple internet search to fact check that part of his lecture and textbook. Whereas Irving had mixed truths and truthiness into a “clear and continued narrative,” subsequent authors have pruned the historical truths from the story, leaving just a myth that has become part of modern folklore.

It is not a carefully guarded secret that Christopher Columbus’ journey to the New World was never to disprove the common man’s belief that the Earth was actually flat. Many texts and other items from centuries past show without a doubt that previous generations were well aware the Earth was “round,” and that knowledge was not “lost” by the Middle Ages, only to be rediscovered by Columbus. Notions to the contrary did not really stick until author Washington Irving embellished Columbus’ backstory in an 1828 book. That creative exaggeration gave rise to a pernicious myth still referenced today (albeit likely not by anyone who spent any time at all double-checking the claim.) As Hayton observed, so pervasive is the misconception that — ironically — even educators and lecturers sometimes fall prey to its existence as part of a broader treatise on valuing science and history over superstition and mythos.