Individuals with Trump signs have been receiving threatening "Dear neighbor, you have been identified as a Trump supporter" flyers or letters in several different cities and states.

On October 19 2020, Republican strategist and known disinformation purveyor Matt Schlapp shared the following tweet, claiming that vaguely threatening letters beginning with “Dear neighbor, you have been identified as a Trump supporter” had been spotted in Kansas City, Missouri:

These fliers are being left in Kansas City neighborhoods. This on top of our former KS National Committeeman getting run over on his yard due to his Trump sign. Please pray that America will reject this violence and hate. pic.twitter.com/vQlb1ZqiVg

In the attached image, a flyer or letter advised its purported recipient to prepare for attacks in the event that United States President Donald Trump refuses to “concede the election”:

You have been identified by our group as being a Trump supporter.

Your address has been added into our database as a target for when we attack should Trump not concede the election.

We recommend that you check your home insurance policy and [ensure] that it is current and that it has adequate coverage for fire damage. You have been given “Fair Warning”.

Be prepared to face the severe consequences of your pre-emptive actions against democracy.

A different photograph of the exact same piece of paper was shared to Reddit’s r/insanepeoplefacebook, this time by someone expressing skepticism about its authenticity:

“Dear Neighbor, you have been identified…”. Yeah, sounds legit. from insanepeoplefacebook

Commenters largely concurred that the letter did not appear to be authentic, or they compared it to previous political hoaxes:

The best part of this is the fact that lets pretend it’s real:

“We will attack should Trump not concede” gives me a reason to vote Trump now. Obviously that’s what the forger of the letter wants but let’s pretend it is from a group who wants him gone.

2)why warn them? If anything if a group really was threatening violence they wouldn’t send letters going OOOHH IMNA GET YOU. They’d do whatever bullshit they wanna do when Trump doesn’t concede. Warning them just gives them a chance to arm up and defend themselves. Its just stupid

As the commenter above explained, the letter itself was implausible in and of itself; anyone with an intent to cause property damage over a political grudge was unlikely to first reach out to their intended victim to warn them.

A cursory search of Facebook revealed the “Dear neighbor, you have been identified” letter was shared by multiple users. Interestingly, all variations of the claim returned in an initial search showed the same exact printout bearing the same exact tears and wrinkles: 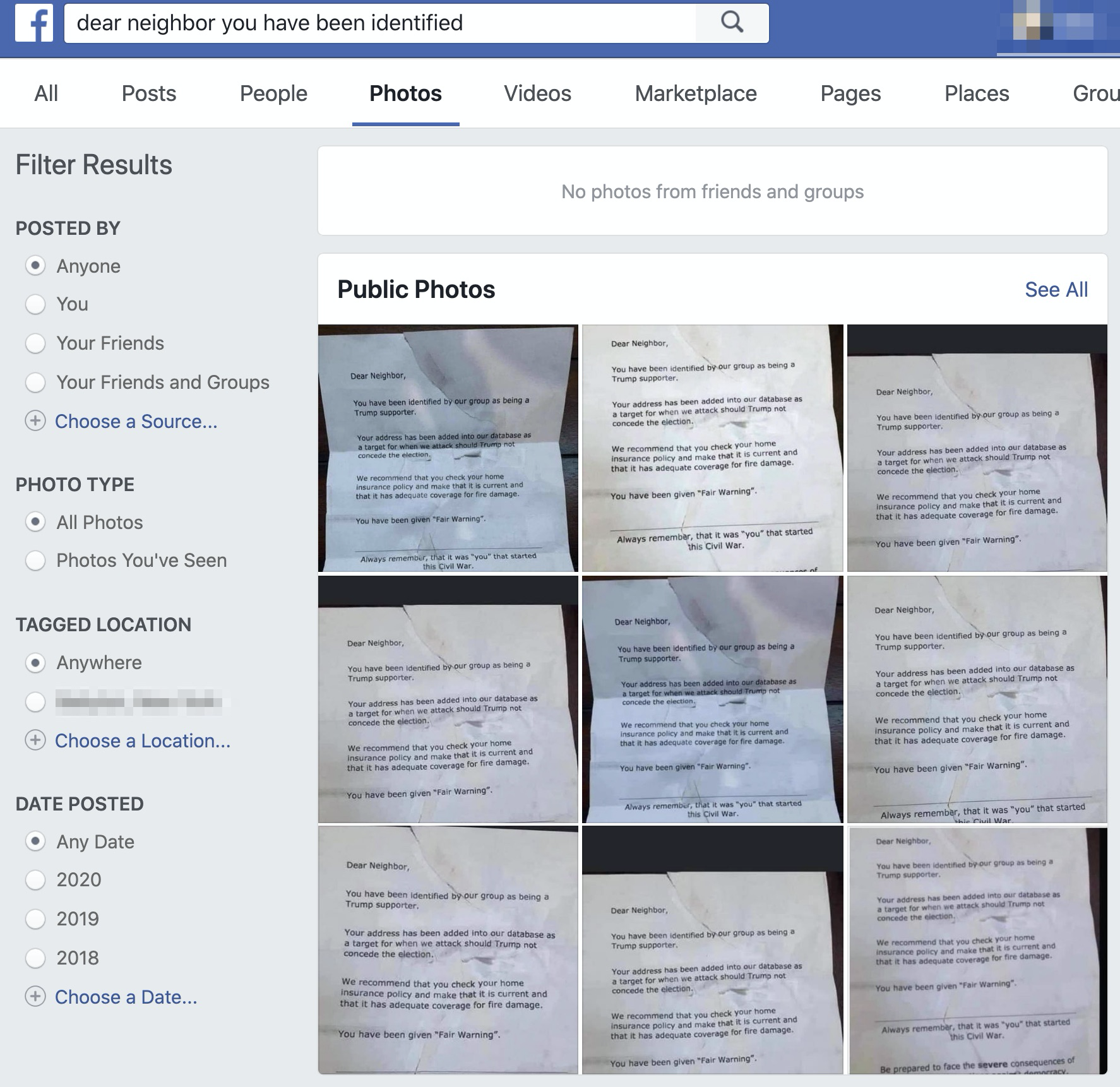 Clicking “see all” led to more than 113 photographs, all of which had those same distinctive rips and tears seen in Schlapp’s tweet. A majority of the images were shared alongside posts claiming “people” had been receiving such letters.

Others claimed that the same letter, with images showing a printout with the same rips and tears was received in Indiana (not Kansas City, as Schlapp said); a post by Rand Paul suggested the letter was from New Hampshire; yet another account claimed that the note was found in San Francisco; another said the Philadelphia neighborhood of Fox Chase; still another claimed that the letter was “addressed from Maine”; one said “Happening in California!!!”, or “THIS HAPPENED IN NEW ORLEANS,” or Houston (Texas), or Florida, or in Lock Haven (Pennsylvania), or Georgia, or Philadelphia, or Minneapolis, or San Diego, or Oregon, and so on.

At least one person claimed they personally received the letter seen in the photograph shared by Schlapp, but then later admitted that was a lie:

I didn’t get the letter. I found it on Facebook. I guess I got to see if I recall who shared it (they didn’t receive it either, I’m certain) and see where it originated.

Regardless of where anyone claimed the letters had been spotted or received — Oregon, Maine, New Orleans, San Diego, San Francisco, Philadelphia, Saturn’s seventh moon — every single photograph depicted the same, single sheet of paper with the same rips and tears. Some were screenshots, and some were different photographs, but all showed the same piece of paper, as evidenced by the distinctive pattern of rips and tears.

On October 19 2020, WMUR reported that one person claimed to receive the letter in question. Brookline Police Chief Bill Quigley told the outlet two other individuals received “a letter,” but WMUR didn’t specify whether those people received the same letter.

As for Kansas City — where Schlapp claimed the letter originated — police tweeted to note that they had received no reports of any such letters being received:

We have seen this circulating on social media. We have received NO reports of any Kansas City, Mo., resident receiving this note. As with anything, we urge you to always research the origins of things you see online that could spread fear and division before sharing them. pic.twitter.com/23YFnIqW6t

As the rumor spread, it was increasingly likely that even more copies would be fabricated to advance the claim the letter was spreading everywhere. We did find a secondary claim that was also reproduced as proof that the practice was widespread, with a letter bearing what appeared to be another possible rip — which was also reproduced as “proof” across social media in exactly the same way:

It’s worth noting the secondary claim Schlapp made in this tweet — that someone tried to run over former Kansas GOP committeeman Dwight Sutherland because of his pro-Trump yard signs — has also been contradicted by local law enforcement:

Though police initially investigated the incident as an aggravated assault and criminal damage to property, Taylor said, by Tuesday police were no longer investigating an assault.

“The victim was contacted by the vehicle however not in a criminal intent type of way,” Taylor said. In other words, he said, evidence does not indicate that the driver intentionally hit Sutherland with the car.

Furthermore, Taylor said, although Sutherland told police his political signs had been stolen in the past there is no evidence at this point indicating the attack was politically motivated. Police, he said, are still investigating whether the damage was intentional.

“(Sutherland) reported that day that the signs had been taken previously and he’s just assuming that that night is related but we cannot confirm that that’s related to each other,” Taylor said.

Sutherland declined to comment on the case, citing the ongoing investigation.

As it stood on October 21 2020, it was not true that the “Dear neighbor, you have been identified” letter (with identical rips and tears) was distributed to Trump supporters in myriad states, and Schlapp’s claim was refuted by police in Kansas City. Between one and three people in New Hampshire claimed to have received the letter or letters resembling it, but the posts claiming that “a friend” or “a neighbor” in broad-ranging locations had received the letter were completely untrue. It was evident that the same exact piece of paper had been reposted dozens of times, largely under the guise of multiple letters having been received or sent.