The Democratic Party shut down the government in 2018-2019, and a meme explains who did it and why.

In mid-January 2019, the Facebook page “I Love My Country” shared a status update meme with the title, “Democrat Government Shutdown Explained”: 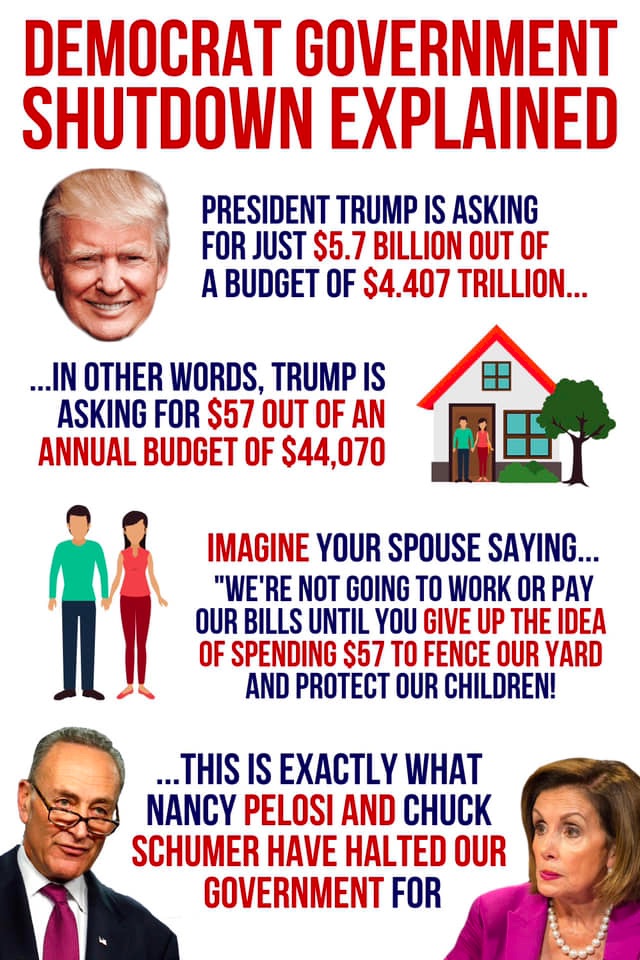 “WE’RE NOT GOING TO WORK OR PAY OUR BILLS UNTIL YOU GIVE UP THE IDEA OF SPENDING $57 TO FENCE OUR YARD AND PROTECT OUR CHILDREN!”

The meme’s claims could be distilled as follows:

In its easily digestible format, the claims seem reasonable, the request fair, and the decision that “halted the government” looks churlish and petty. But are its assertions in line with political reality, or was the meme aimed at readers unaware of the mechanics of a shutdown?

The first claim is that the Democratic Party was responsible for starting the shutdown, and the fourth that Schumer and Pelosi were in instrumental in shutting federal operations down. We addressed both claims in an earlier page. A segment of that fact check covered the events leading up to the shutdown, including an emotional Oval Office meeting attended by all three parties — Trump, Schumer, and Pelosi. Quoted portions are italicized, and emphasized portions bolded:

[A Facebook] post made reference to a federal government shutdown, which began on December 22, 2018 and continued into January 2019. On December 11, 2018, the New York Times reported increasing and public hostilities leading toward federal gridlock over U.S. President Donald Trump’s insistence that his campaign promise of a border wall be funded (despite the fact that a border wall already exists):

Senator Chuck Schumer of New York and Representative Nancy Pelosi of California, the Democratic leaders, seated on couches flanking Mr. Trump in the Oval Office, took issue with the president’s position and his false assertions about the wall in front of a phalanx of news cameras, imploring him repeatedly to continue the tense conversation without reporters present. But Mr. Trump insisted on a conspicuous clash that undercut Republican congressional leaders and his own staff working to avoid a shutdown at all costs, or at least to ensure that Democrats would shoulder the blame for such a result.

“If we don’t have border security, we’ll shut down the government — this country needs border security,” Mr. Trump declared as the testy back and forth unfolded, and Mr. Schumer reminded the president repeatedly that he had called several times for a shutdown, appearing to goad him into taking responsibility.

The New York Times quoted an exchange between Schumer and President Trump about a then-impending suspension of federal government operations, adding commentary from Democrat leaders following the meeting. In the exchange, President Trump stated explicitly that he was shutting the government down:

“You want to know something?” Mr. Trump finally said, exasperated. “I’ll tell you what: I am proud to shut down the government for border security, Chuck.”

…Outside the West Wing after the meeting, Mr. Schumer said Mr. Trump had thrown a “temper tantrum” over the wall, later telling reporters, “You heard the president: He wants a shutdown.”

Republican leaders were also quoted on the prospect of a shutdown which had at that point not yet come to pass:

“I hope that’s not where we end up,” Senator Mitch McConnell of Kentucky, the majority leader, told reporters. “It was a rather spirited meeting we all watched, but I’d still like to see a smooth ending here.”

Senator John Cornyn, Republican of Texas, said, “My experience has been that shutdowns don’t help anybody.”

Trump said he was “proud to shut down the government for border security” and unless funding was secured for the wall, his administration would “shut down the government.” That the president directly stated that he was “not going to blame” Schumer or Pelosi for the circumstance made the meme out of sync with the Commander-in-Chief’s own words. Trump stated that the shutdown was his decision, and he further affirmed Schumer and Pelosi would not shoulder “blame” for that decision — rendering points one and four of the meme false.

The other two points of the meme held that the $5.7 billion requested by President Trump for border wall funding was a tiny portion of the government’s $4.4 trillion budget. This further implied that the federal government’s annual outlay on all programs was $4.4 trillion, and the $5.7 billion requested was compared to $57 out of $44,000. As for why the figure of $44,407 was selected as a benchmark, that likely came from the subsequent proportions — the $57 example represented the $5.7 billion with all the decimals moved over to translate to a sum anyone can understand in context.

It appears that the figure of $4.4 trillion came from financial site TheBalance.com, and it was similar to the fiscal year 2018 figure provided by Wikipedia; the amount was possibly extrapolated from the more detailed 2018 page. Nevertheless, the $4.4 trillion number was close enough to any figure we located for the projected government expenditures in 2019.

Overall, the meme claimed that Democrats led by Sen. Schumer and Rep. Pelosi shut down the government over the equivalent of $57 for a household earning $44,000 annually. It is true that the border wall funding requested totaled about .13 percent of 2019 fiscal year budget figure provided by TheBalance.com, but President Donald Trump himself said he would be “the one to shut it down.” This means the math was more or less solid, but the meme then performs an acrobatic maneuver to try to lay the blame at the Democratic Party’s feet. Therefore, we rate this claim as Mixed.