As concerns over novel coronavirus strain COVID-19 crested in mid-March 2020, comparisons between the effects of the strain versus that of H1N1 (or “swine flu”) more than a decade before triggered a flurry of fact checks, a Facebook flag on the memes, and exacerbated distrust in the efficacy of Facebook’s fact-checking program.

Although several memes circulated, the two-level nature of the claims unwittingly exposed the limitations of Facebook fact-check flags. We collected several, which all contained roughly the same information and claims. We’ve broken them down into statistic-related facts versus unverifiable opinion:

We examined the first two claims above. Although an argument could be made that the third was verifiable or otherwise form the basis of a fact-check, reception of subsequent fact-checks on the claims informed our decision to separate the two.

A March 13 2020 tweet showed one iteration of the claims:

That user tweeted an image, which read:

Do you all see how the media can manipulate your life?

The secondary claim we are not addressing here held that the media was responsible for grossly overemphasizing the risks posed by COVID-19, especially when comparing it to the H1N1 epidemic during United States President Barack Obama’s administration in 2009.

It is important to bear in mind that novel coronavirus or COVID-19 is not exclusive to the United States. The World Health Organization declared the strain a pandemic in March 2020. “The media” as described in the tweet could not possibly influence the decisions of public health officials in every affected country.

When that was put aside, we were left with four relevant figures, two of which had to do with COVID-19. If the numbers were ever accurate, they were certainly outdated by March 13 2020. Given that  fact-checks of the meme dated back several days, we excluded that claim from this fact check and were left with two statistics:

Another version we saw appeared with an image of right-wing radio host Rush Limbaugh and was shared on March 12 2020. The post was flagged with a Facebook warning for users who clicked through:

Underneath the flag and alongside a status update (“Tell me the Hysteria isn’t political!”), the post read:

[“]60 million Americans were infected with Swine Flu resulting in 274,304 hospitalizations and 12,469 deaths. No media panic, no trashing of President Barack Obama and no travel ban. You don’t even remember it.” – Rush Limbaugh

Again, several statements were subjective or pure opinion, such as:

Obviously, the latter was immediately disproved by the memes’ circulation — all memes referenced H1N1, and clearly people remembered the outbreak. We might even hazard a guess that people — perhaps even Rush Limbaugh — “trashed” Obama during the outbreak, but there were other figures speaking to the meme’s credibility: 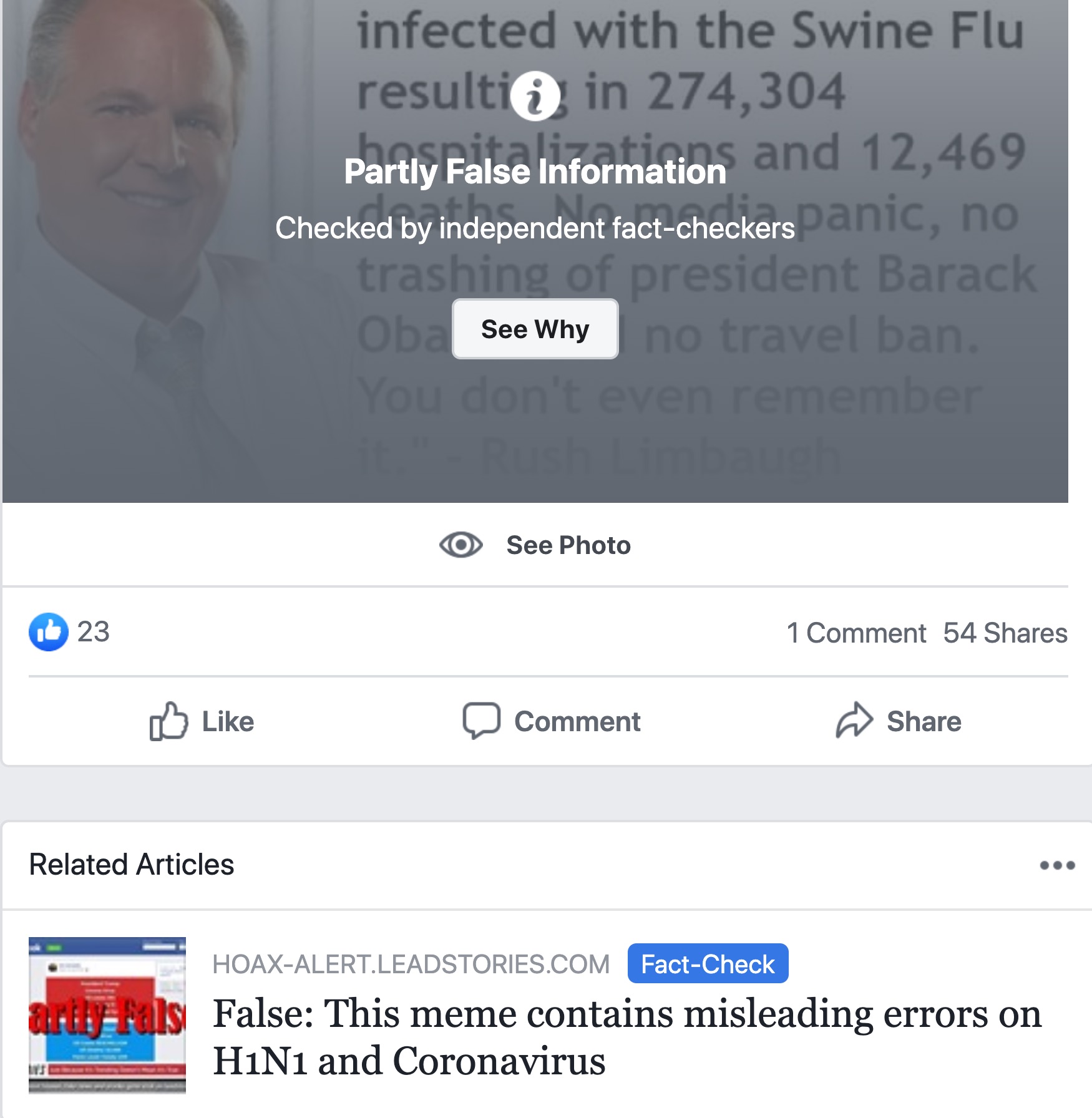 A fact-check from LeadStories.com was appended under the flag. That was also the case for yet another version of the meme posted on the same day (March 12 2020) to a Facebook group for fans of both Disney parks and President Trump.

In that iteration, the flaws in Facebook’s use of the flag became clearer. The original post was a share of the following meme (which was labeled “partly false” via flag) alongside a link to a Centers for Disease Control (CDC) page on H1N1 with the following commentary:

This is all facts. But it’s blocking it! How scary. Here are the facts from CDC. This is scary how they try to hide the truth.

Further complicating matters was the fact that clicking through to the LeadStories.com page did not work. Several commenters also reported being unable to click through. We visited the LeadStories site and located the page, but not every user would do that — further undermining the credibility of such flags.

We uncovered the meme in this screenshot for visibility: 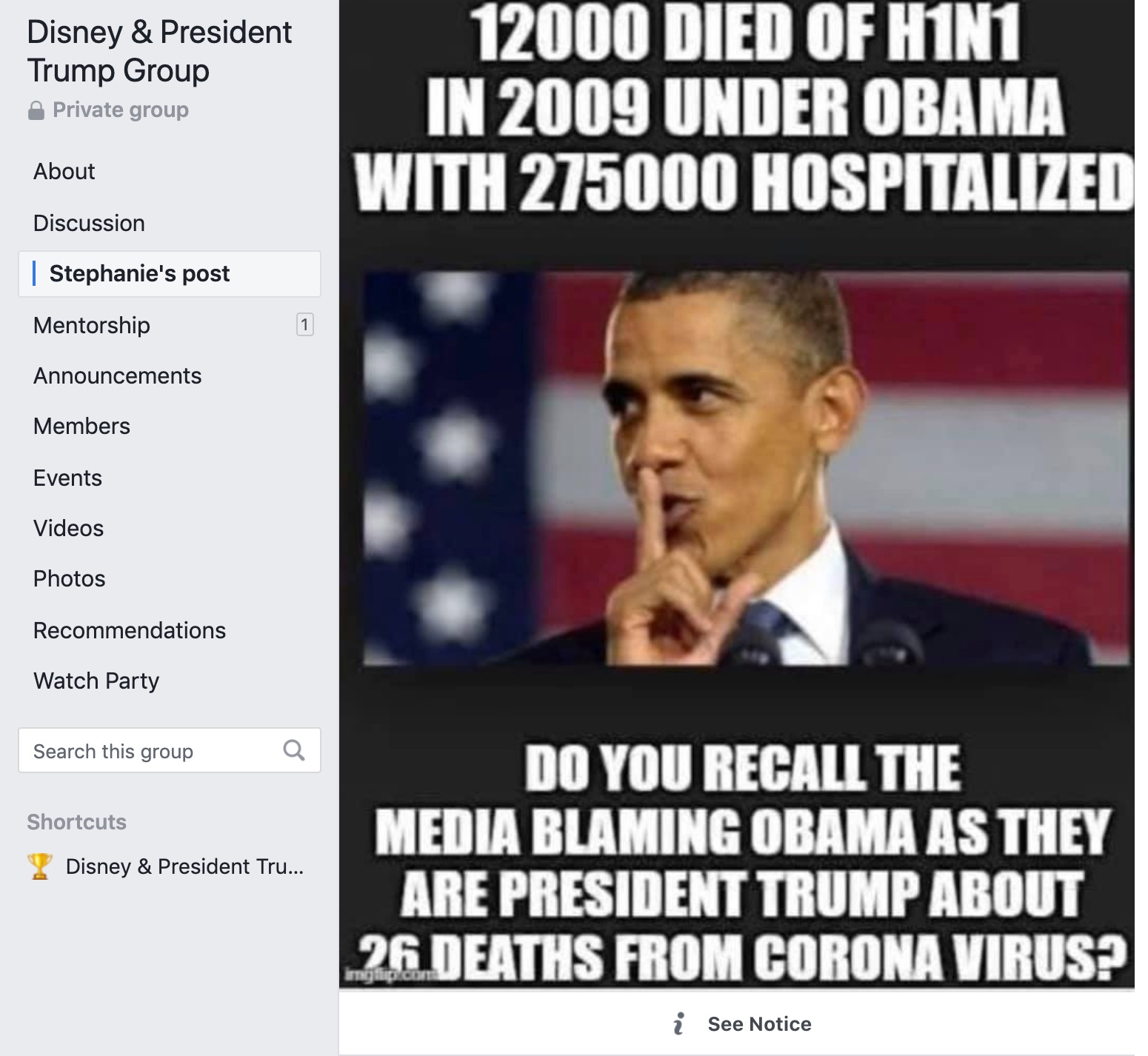 Across an image of United States President Barack Obama with a finger to his lips, text read:

DO YOU RECALL THE MEDIA BLAMING OBAMA AS THEY ARE PRESIDENT TRUMP ABOUT 26 DEATHS FROM CORONA VIRUS?

Commenters were clearly confused by the “partly false” flag “blocking” the content, but juxtaposed with a link to the CDC matching the numbers: 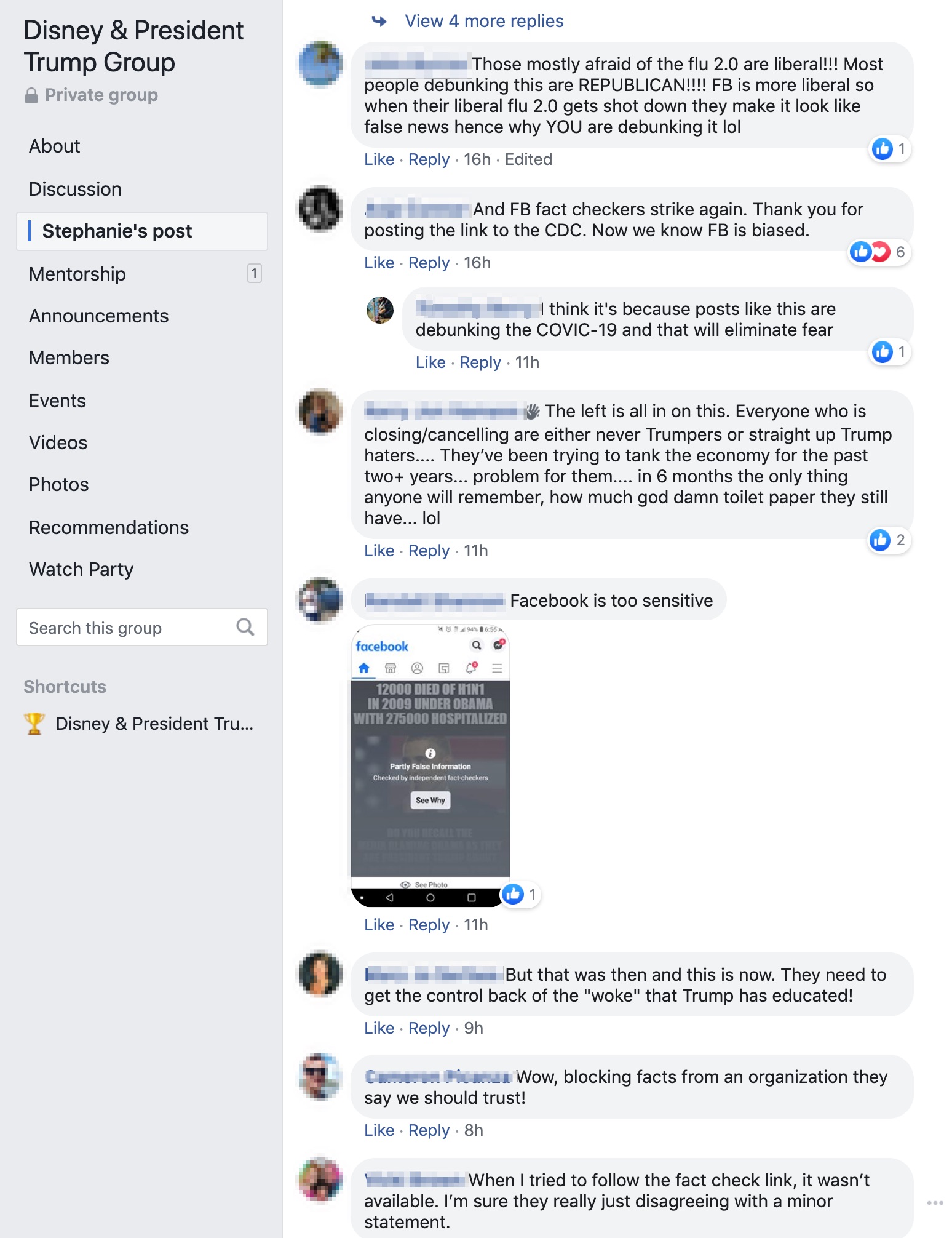 Commenters objected to the numbers in the meme being marked false, writing:

“And FB fact checkers strike again. Thank you for posting the link to the CDC. Now we know FB is biased.”

“The left is all in on this. Everyone who is closing/cancelling are either never Trumpers or straight up Trump haters…. They’ve been trying to tank the economy for the past two+ years… problem for them…. in 6 months the only thing anyone will remember, how much god damn toilet paper they still have… lol”

In additional comments, users speculated the non-working LeadStories.com link was to conceal the content of fact-checking related to the meme:

“When I tried to follow the fact check link, it wasn’t available. I’m sure they really just disagreeing with a minor statement.”

“Checked by independent fact checkers under the Obama administration.”

Once again, the meme made a combination of subjective or opinion claims and verifiable statistics. Like the others, this meme maintained:

As noted above, we managed to access LeadStories.com’s fact check, which was published on March 12 2020. That post included a similar, but not identical, version of the iteration linked above from Twitter, and it linked to a since-deleted Facebook post. That deleted Facebook post was followed by an archived link, which did not work. A screenshot was mentioned, but we were unable to see a screenshot.

That quoted material involved a slightly different figure for US deaths of H1N1.

We searched Twitter for the number “22,469,” and it did frequently appear in similar tweets. However, since the iterations we found exclusively cited the 12,000 or 12,469 number of deaths, that is the number we are including in our own fact-check here.  And again, whether or not the media treated Obama better than Trump or vice versa was largely subjective in the scope of these memes and this fact-check. Clearly, grouping the claims together only led to confusion among Facebook users, some of whom saw fact-check flags with “partly false” ratings juxtaposed with what appeared to be official statistics.

The third meme from the Disney/Trump group claimed that 12,000 Americans died and 275,000 were hospitalized due to H1N1. The user linked a CDC page on H1N1 with final statistics from 2011, which reported:

In 2010, the CDC was still estimating the number of deaths, hospitalizations, and infections. Several revisions and ranges were included, among them:

Using the same methodology CDC has again updated the estimates to include the time period from April 2009 through February 13, 2010 on March 12, 2010.

CDC says H1N1 infected 61 million Americans during the pandemic and killed around 12,000. H1N1 is now part of the annual seasonal flu mix.

Again, memes were marked partly false based on two-level claims. One claim was that U.S. President Donald Trump was scrutinized more strongly than his predecessor, President Barack Obama, during respective pandemics — H1N1/swine flu in 2009, and COVID-19/coronavirus in 2020. That element of the claim was arguably subjective, but more importantly, the more math-based element of the claim caused broad confusion over fact-checks related to it.

The second part of the claim held that 12,000 or 12,469 Americans died of H1N1 during a 2009-2010 pandemic, that 60.8 million or 60 million Americans were sickened, and that 247,000 to 275,000 were hospitalized. All three claims appeared on all three memes in some form, and all three were accurate whether rounded or exact. In 2013, the CDC revised figures to the more precise and unrounded ones, and the memes accurately stated those figures as they appeared on CDC resources. Separating out only the figures, all three memes contained accurate figures for the H1N1 pandemic in 2009 and 2010, but had the unforeseen effect of showing where Facebook’s methodology for utilizing fact-checkers was weakest.