A Democratic Party lawmaker was caught saying that " Americans over 70 years old should just be euthanized" and pushing the idea of a bill legalizing that.

Known satire site the Last Line of Defense, or LLOD, continued pushing its content in September 2019, as they opened another affiliate site publishing the same kind of posts.

Daily World Update, billing itself as “satire for flat earthers, Trumpers, and y’all qaeda,” ran a post accusing a made-up Democratic Party lawmaker named Ginny Talia of calling for the “euthanization” of seniors: 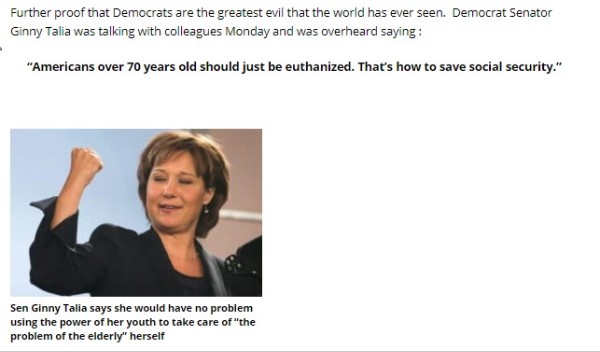 While “Talia” may not exist, the woman identified as her in a photograph does; the photo is actually of Christy Clark, the former premier for the Canadian province of British Columbia. It was first published by the Canadian Press in January 2013.

The post also pushes the claim that “Talia” smeared the elderly in a rant caught on a cell phone video (which is not included):

Seriously, why do we even keep them around? I mean thank you for your service but you no longer serve any purpose in society.

There’s so damn many of them now. Boomers. Our infrastructure can’’t support them. Socialism is about protecting the good of all. The few make sacrifices for the whole. Geriatrics should be saying to themselves, ‘We are a burden on society. Our children will suffer for our selfishness in staying alive.

We contacted both Clark and the Canadian Press to ask about the use of her likeness by Daily World Update.

While the post is labeled “satire and/or conservative fan fiction” and Daily World Update contains a disclaimer about the fabricated nature of their content, this story — like many others — was republished and run verbatim by other blogs, which then omitted any such notice for their readers.

The blogger behind LLOD and its spinoff sites has claimed that his content does not sway opinions, and that readers would be able to discern obvious fabrications from legitimate news stories. But researchers have come out against that claim. “I keep seeing proprietors of supposedly satirical fake news websites using this excuse, but I know of no research to suggest it is accurate,” Dartmouth University professor Brendan Nyhan told Politifact in May 2017. “It seems more like a way to make the other side look bad and/or make money while spreading misinformation.”

Similarly, Vanderbilt University researcher Lisa Fazio found in her own work that even readers who knew a published claim to be false would be more likely to believe otherwise the more they were exposed to disinformation. She wrote:

Even debunking a false claim, Fazio reported, can reinforce it and continue its spread in what is known as “the backfire effect.” However, in recent years, some of the most disheartening conclusions about the backfire effect have been revised. Instead, it could be called the “pushback effect,” which is still damaging — but not to the extent that was previously believed.