As the Trump administration’s attempts to overturn the election continued on November 20 2020, attorney Andrew Fleischman highlighted a possible error in an affidavit filed by lawyer Lin Wood in which a sworn expert apparently confused Minnesota with Michigan:

Lin Wood alleged (in Georgia) that he could prove voter fraud occurred in this election because more people voted in some parts of Michigan than actually lived there. Damning stuff. Except… /1 pic.twitter.com/TLqCxDmOTo

As this Powerline blog post shows, that expert confused Minnesota and Michigan. He was counting the population of towns in Minnesota, seeing they did not match Michigan towns, and finding fraud.https://t.co/8reF1Lz8tF pic.twitter.com/Ucjw1ePsgv

… I got an email today [November 19 2020] from a Minnesota resident, a conservative and a smart guy who is the CEO of a company, and later talked with him on the phone. He has taken the trouble to read the filings that have been made so far by Trump’s lawyers. He directed my attention to an affidavit signed by Russell Ramsland, a Texas resident who is an expert on cyber security. The affidavit was filed by Lin Wood in the Georgia lawsuit, but it relates entirely to Michigan, and it is a safe bet that it has been filed in one or more cases in that state as well.

Power Line added screenshots of portions of the affidavit along with quotes from the document:

Here’s the problem: the townships and precincts listed in paragraphs 11 and 17 of the affidavit are not in Michigan. They are in Minnesota. Monticello, Albertville, Lake Lillian, Houston, Brownsville, Runeberg, Wolf Lake, Height of Land, Detroit Lakes, Frazee, Kandiyohi–these are all towns in Minnesota. I haven’t checked them all, but I checked a lot of them, and all locations listed in paragraphs 11 and 17 that I looked up are in Minnesota, with no corresponding township in Michigan. This would have been obvious to someone from this state, but Mr. Ramsland is a Texan and the lawyers are probably not natives of either Minnesota or Michigan.

Describing the oversight as “a catastrophic error, the kind of thing that causes a legal position to crash and burn,” Hinderaker proposed a manner by which such a mistake might occur:

Evidently a researcher, either Mr. Ramsland or someone working for him, was working with a database and confused “MI” for Minnesota with “MI” for Michigan. (The postal code for Minnesota is MN, while Michigan is MI, so one can see how this might happen.) So the affidavit, which addresses “anomalies and red flags” in Michigan, is based largely, and mistakenly, on data from Minnesota… has Mr. Ramsland inadvertently stumbled across evidence of voter fraud in Minnesota? I seriously doubt it.

The nine-page affidavit from Russell James Ramsland, Jr. is available for review [PDF]; it was filed on November 18 2020.

Ramsland referenced “significant anomalies and red flags that [he and his colleagues] have observed,” adding that they believe that “there is a significant probability that election results have been manipulated within the Dominion/Premier system in Michigan.” Paragraph eleven of the affidavit begins:

Ramsland included a table of precincts ostensibly in Michigan (with percentages based on Michigan Secretary of State data) in order showcase what he said was statistical evidence of fraud in Michigan: 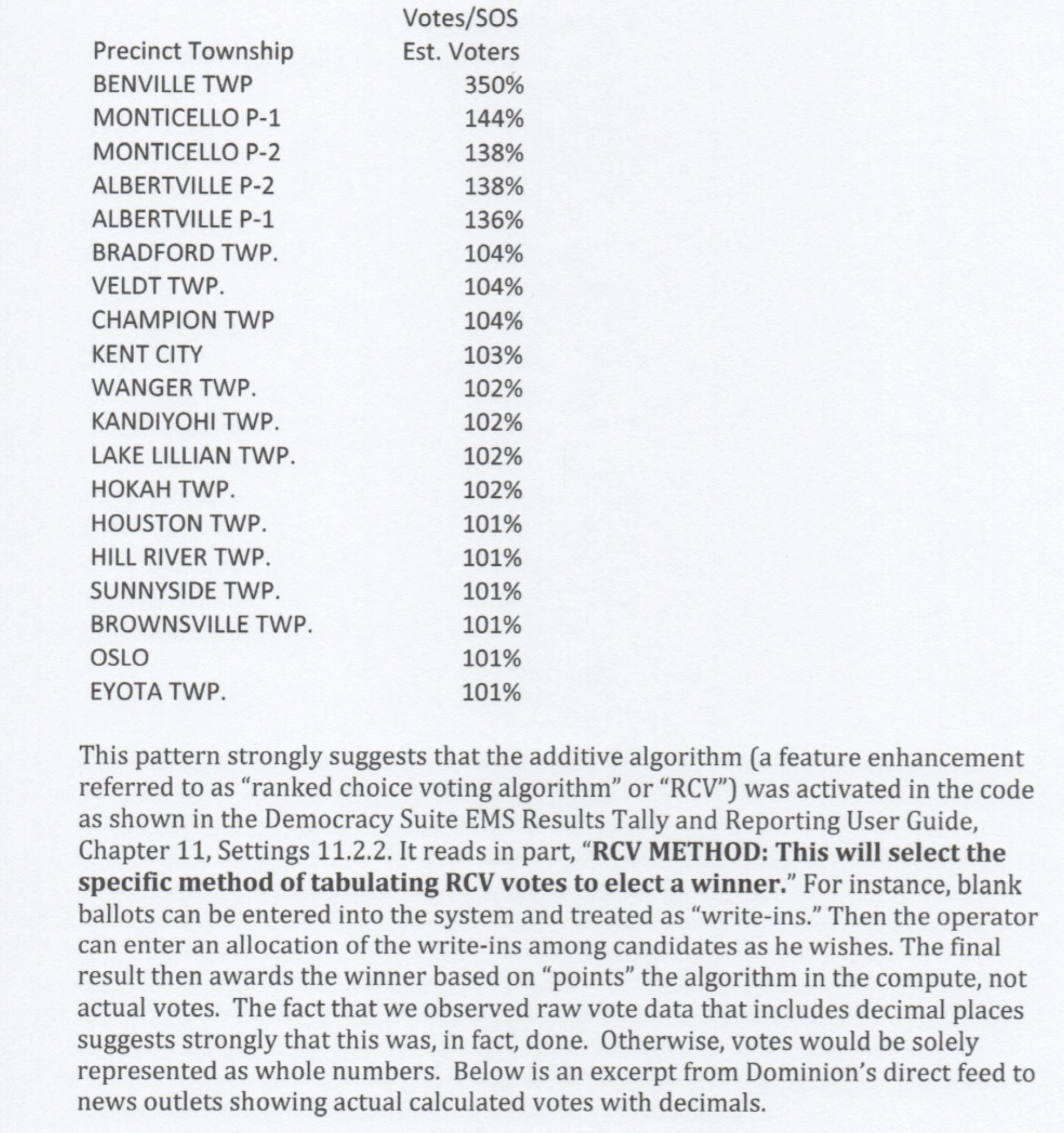 Precinct townships listed were as follows:

Some of the names (like Oslo) shared names with other locations. Others were a bit easier to tack to a unique place:

Social media lit up with rumors that a legal affidavit purportedly showing “statistical evidence of fraud” in Michigan listed off townships and precincts in Minnesota as evidence of fraud in Michigan — possibly due to confusion stemming from the postal abbreviations of MI and MN, respectively. The majority of precincts and townships named in the list existed only in Minnesota; a few shared names with other locations, such as Oslo or Sunnyside.