54 percent of Americans believe the 2020 election was fraudulent, and that United States President Donald Trump should not concede.

On November 19 2020, “So 54%” was one of Twitter’s trending topics — due to a piece of of misleading math prompted by a tweet and article from TheHill.com:

Thanks for admitting more than half the country knows there was fraud, @thehill.

Also, thanks for proving the fraud with this poll. https://t.co/938GOsQn0Z

Thanks for admitting more than half the country knows there was fraud, @thehill . Also, thanks for proving the fraud with this poll.

Cardillo apparently didn’t read the article that he had tweeted, which actually said neither of those things:

A plurality of voters say President Trump should concede the presidential race to President-elect Joe Biden, according to a new Politico/Morning Consult poll released [November 17 2020].

Forty-six percent of registered voters surveyed said Trump should concede “right away,” while another 32 percent said he should concede if he is “unable to back up his claims of widespread fraud.” Just 12 percent said the president should not concede “no matter what,” and 9 percent didn’t know or had no opinion.

The results of the poll are sharply split along partisan lines, with 72 percent of Democrats saying Trump should concede right away compared to just 17 percent of Republicans. Nearly half (45 percent) of Republicans said Trump should only concede if he can’t back up his baseless voter fraud claims, and a full quarter of registered GOP voters say Trump should not concede no matter what.

Simply clicking through to the article instead of subtracting 46 from 100 would have negated the “So 56%” commentary circulating around social media. The article actually said:

Even the 12 percent of registered voters surveyed who selected the “no matter what” option didn’t appear to be attached to a “fraud” claim; the reasons they believed Trump should not concede were not specified in the article.

Politico and Morning Consult’s poll, “National Tracking Poll #201162 November 13-16, 2020,” is available to view here. The results were prefaced with the following context:

This poll was conducted between November 13-November 16, 2020 among a national sample of 1994 Registered Voters. The interviews were conducted online and the data were weighted to approximate a target sample of Registered Voters based on gender, educational attainment, age, race, and region. Results from the full survey have a margin of error of plus or minus 2 percentage points.

The Hill’s “46 percent” figure appeared on page 216, and the actual crosstabs were even further from the claim that “56 percent of voters” didn’t believe Trump should concede right away: 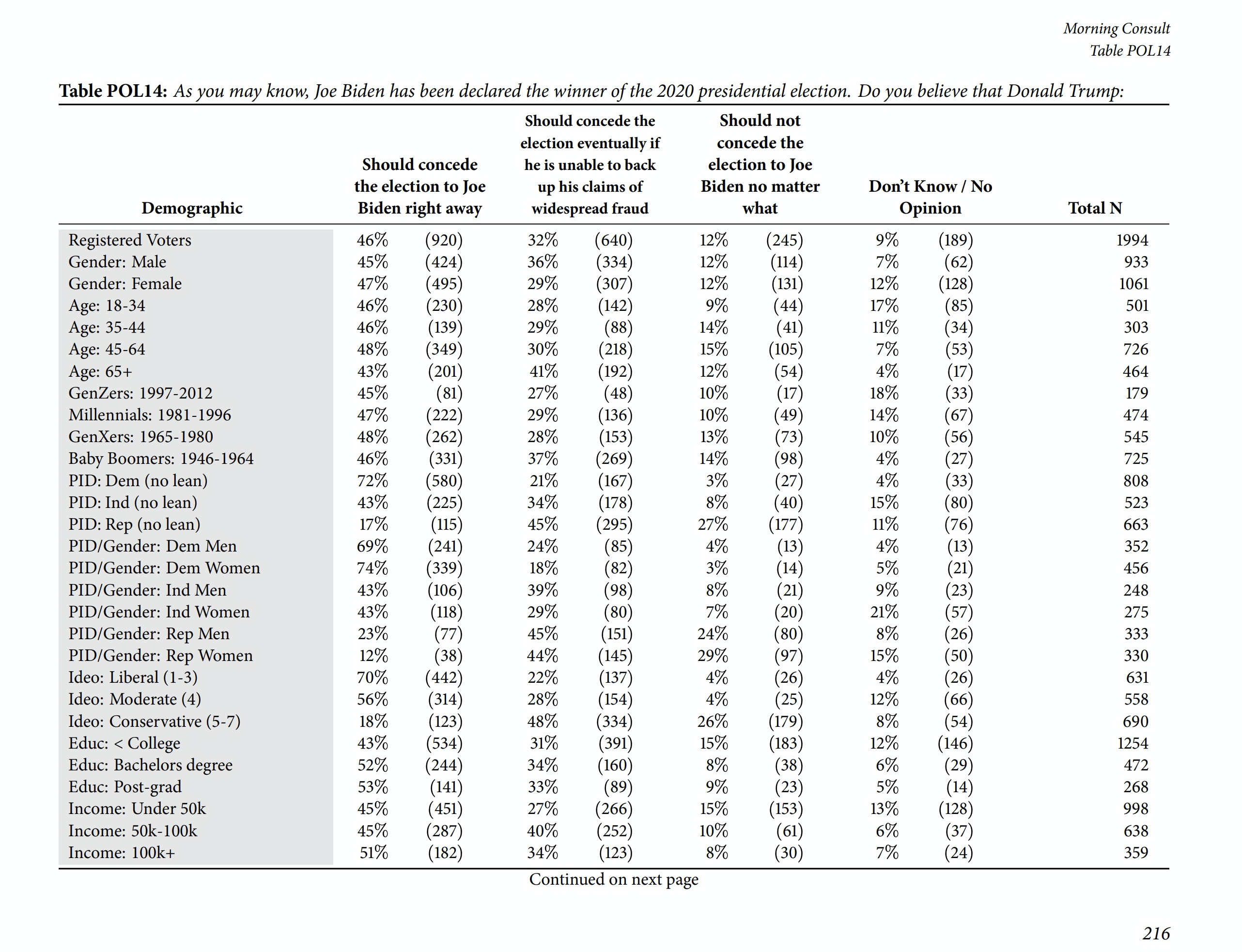 The same affiliations’ percentages under “Should concede the election to Joe Biden right away” were as follows:

“So 54%” was a misleading Twitter trending term, after The Hill tweeted that 46 percent of registered voters believed that Trump ought to “concede right away.” Although it is true that 100 minus 54 is 46, that was about the only accurate part of John Cardillo’s tweet. It was not true that 54 percent of Americans believed Trump should not concede, and further not true that the poll was informal with two binary options. The claim on the whole was false.