A poll reported on November 23 2020 revealed that a majority of Americans said President Donald Trump should concede to President-Elect Joe Biden.

On November 23 2020, social media posts indicated that a then-new poll revealed a majority of Americans believed that U.S. President Donald Trump should concede the election to President-Elect Joe Biden — that majority being 58 percent of all voters:

Nearly all mentions of the claim a majority of Americans polled believed that Trump should concede linked back to one of two places — TheHill.com, or outlets summarizing TheHill.com’s reporting, with a “read more” link pointing to the same article.

At 3:29 PM on November 23 2020, the outlet published an article titled “Poll: Majority say Trump should concede.” That article was generating hundreds of comments every few minutes; it began:

A strong majority of voters say the election was fair and that President Trump should concede defeat to President-elect Joe Biden, according to a new poll.

The latest Harvard CAPS-Harris survey finds that nearly two out of three voters believe the election was fair and that Biden won. Fifty-eight percent of all voters said it’s time for Trump to concede.

“Voters see Biden as the clear and fair winner of a close race that was decided by Trump’s poor performance on the virus,” said Harvard CAPS-Harris director Mark Penn. “That is the reason he lost and voters are expecting the virus to be the day one priority of the Biden administration.”

Immediately thereafter, the article reported that the results were different when broken down to party lines. According to the next few paragraphs, two-thirds of Republicans believed that Trump won and 70 percent of Republicans did not believe he should concede:

Those findings come as Trump makes unsubstantiated claims that the election was stolen from him through fraud.

The president’s legal team has been trying to overturn the results in court and the General Services Administrator has refused to ascertain Biden as the winner, depriving him of transition resources and government intelligence briefings.

However, the final few paragraphs of the article made clear that the data underpinning the article’s claims was not available for review as of November 23 2020:

The Harvard CAPS-Harris poll of 2,205 registered voters was conducted between Nov. 17 and 19. It is a collaboration of the Center for American Political Studies at Harvard University and The Harris Poll.

Full poll results will be posted online later this week. The survey is an online sample drawn from the Harris Panel and weighted to reflect known demographics. As a representative online sample, it does not report a probability confidence interval.

Initially, we were unable to locate anything other than The Hill’s article and articles about The Hill’s article. However, it appeared the Harvard CAPS-Harris poll was uploaded to the site later on the afternoon of November 23 2020 [PDF].

On page 76 of data from polling done between November 17 and 19 2020 [PDF], responses were provided to the following question:

Given where things stand today, do you think Donald Trump should concede the election to Joe Biden, or should he wait until all recounts are done?

The same data appeared in the poll’s full results [PDF], including the figure indicating 58 percent of Americans polled between November 17 and 19 2020 believed President Trump should concede the election. That information was located on page 19: 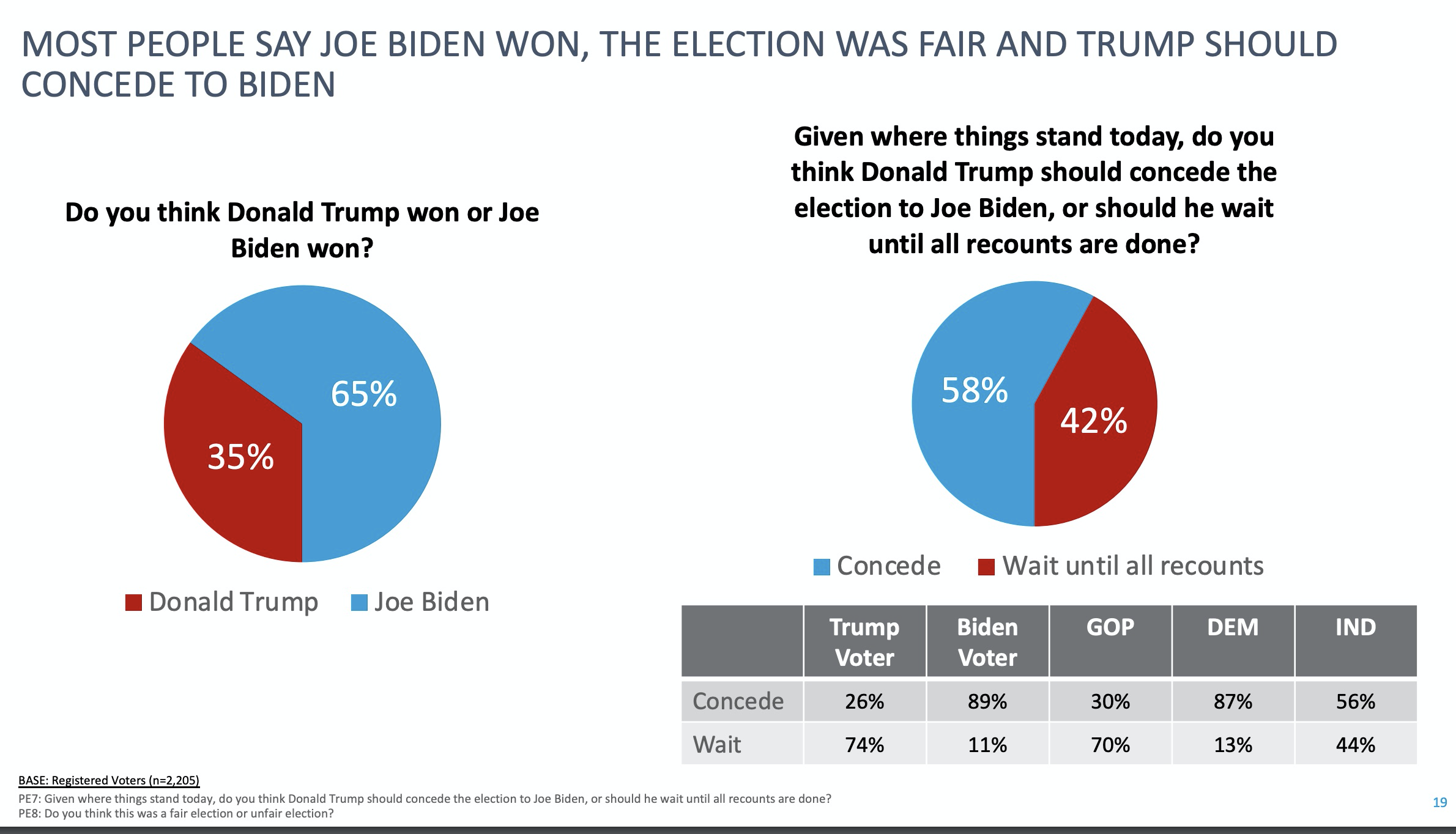 Data were organized into a table with five top tabs (Trump Voter, Biden Voter, GOP, [Democrat], and [Independent]), and the horizontal tabs were labeled “Concede” and “Wait.” Results on the table were as follows:

That data appeared on page 30 of the full results, and page 90 of the crosstabs dataset, a label for which read:

ON GEORGIA RUN OFFS, MOST VOTERS SAY THEY WANT A BIPARTISAN CONGRESS; IN GENERAL, MEDIA SHOULD WAIT UNTIL ELECTIONS ARE STATE-CERTIFIED BEFORE CALLING

Do you prefer the Senate to be under Democratic control after the January run-offs or do you prefer divided government where Republicans have a majority in the Senate?

Results were displayed as follows: 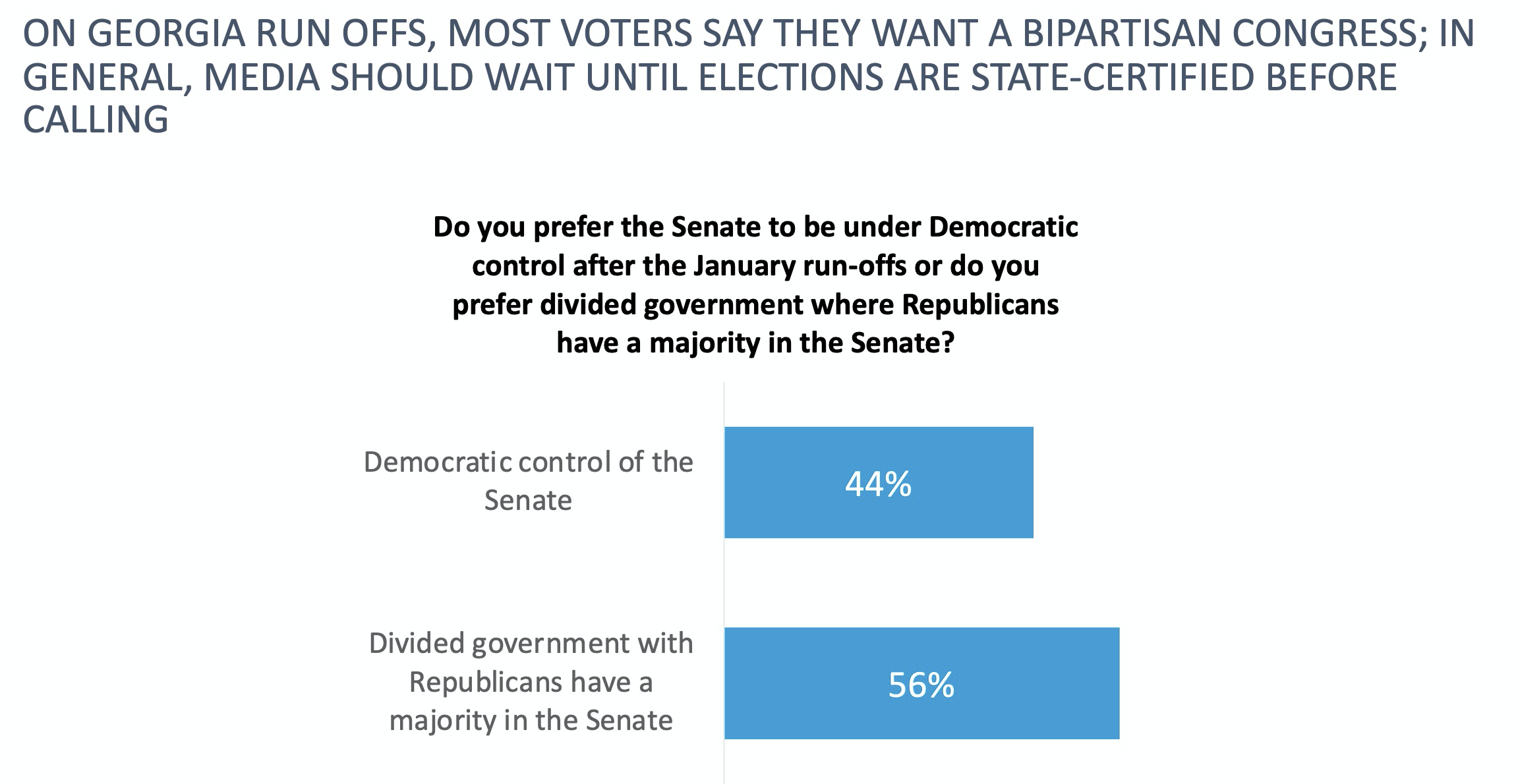 At first, corroboration for TheHill.com’s “Poll: Majority say Trump should concede” article was unavailable, but the results were uploaded shortly after the page went viral. According to a poll conducted between November 17 and 19 2020, 58 percent of all Americans polled believed that U.S. President Donald Trump should concede immediately. Those numbers were predictably higher among Biden voters and lower among Trump voters. Independent voters were only slightly less likely to say Trump should concede, at 56 percent.