A school painted an optical illusion checkered floor in a hallway to prevent students from running indoors. 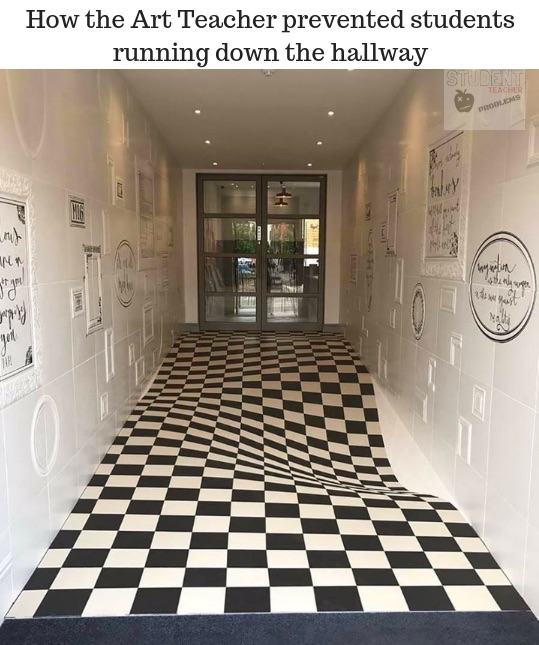 How the Art Teacher prevented students from running down the hallway

The Facebook post did not contain any citation or other elements that would make determining the claim’s veracity easier, but a reverse image search showed that the picture has been appearing online since at least 2017. The first version we found was on Twitter, where one person — Duncan Cook, co-owner of a Manchester, UK-based tile company called Casa Ceramica — shared it in response to a similar photograph of a confusingly-patterned carpet, and wrote:

Like our entrance floor made from tiles #sorrynotsorry [emoji]

In a subsequent tweet, the Casa Ceramica account shared photographs of the same floor from a different perspective. In response to how the illusion functioned, Cook showed that the trick only worked from one vantage point:

Correct, here is the view back the other way @casaceramica 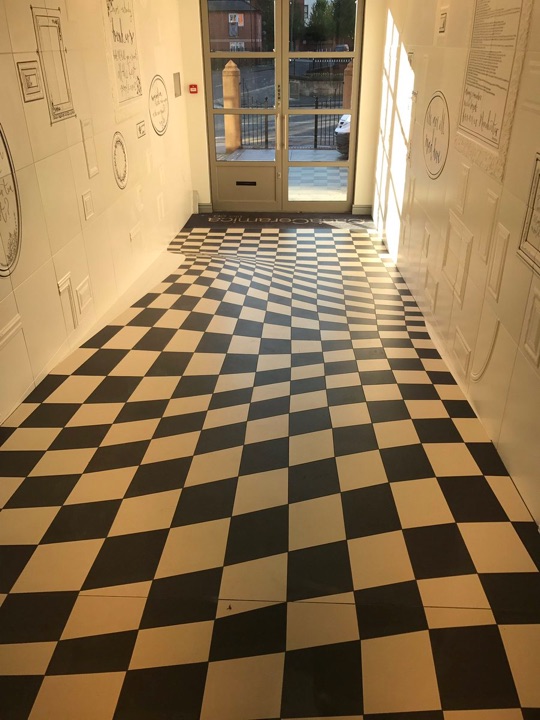 In another response, Casa Ceramica shared a short video of the floor’s installation. In a blog post, the company explained that the optical illusion tile floor was installed in their showroom entryway:

Last week we went viral online with our entrance floor! With various headlines of ‘Wonky floor’ to ‘This floor was installed to stop people running”, which isn’t the case!

Over the past week our entrance floor has been featured in articles from the daily mail, the times and more. With various different headlines storming through of; “company creates clever wonky floor” to “Mind boggling optical illusion”. There has been a huge variety of different stories going around as to why we installed our ‘Wonky’ flooring, we’re here to explain all!

…Although to the naked eye the floor does look at little uneven it isn’t until you view it through a camera that the true illusion is brought to life. Customers are amazed when they enter, it’s one of the first things out of their mouths and then are even more amazed when we show them what happens when viewed through a camera.

Although the notion of installing a floor that tricks the eye to discourage students from running indoors is amusing, it’s not what’s going on in the viral photograph of that checkered floor. Casa Ceramica explained at length that the photograph (and others) shows their tile showroom entryway. We imagine that few people run across it.