Portraits depict Agnes Sorel in the 1400s, exposing her favorite breast and myths about "modesty."

In January 2019, screenshots of the following Twitter claim about Agnès Sorel, lover to King Charles VII of France, began circulating on Facebook: 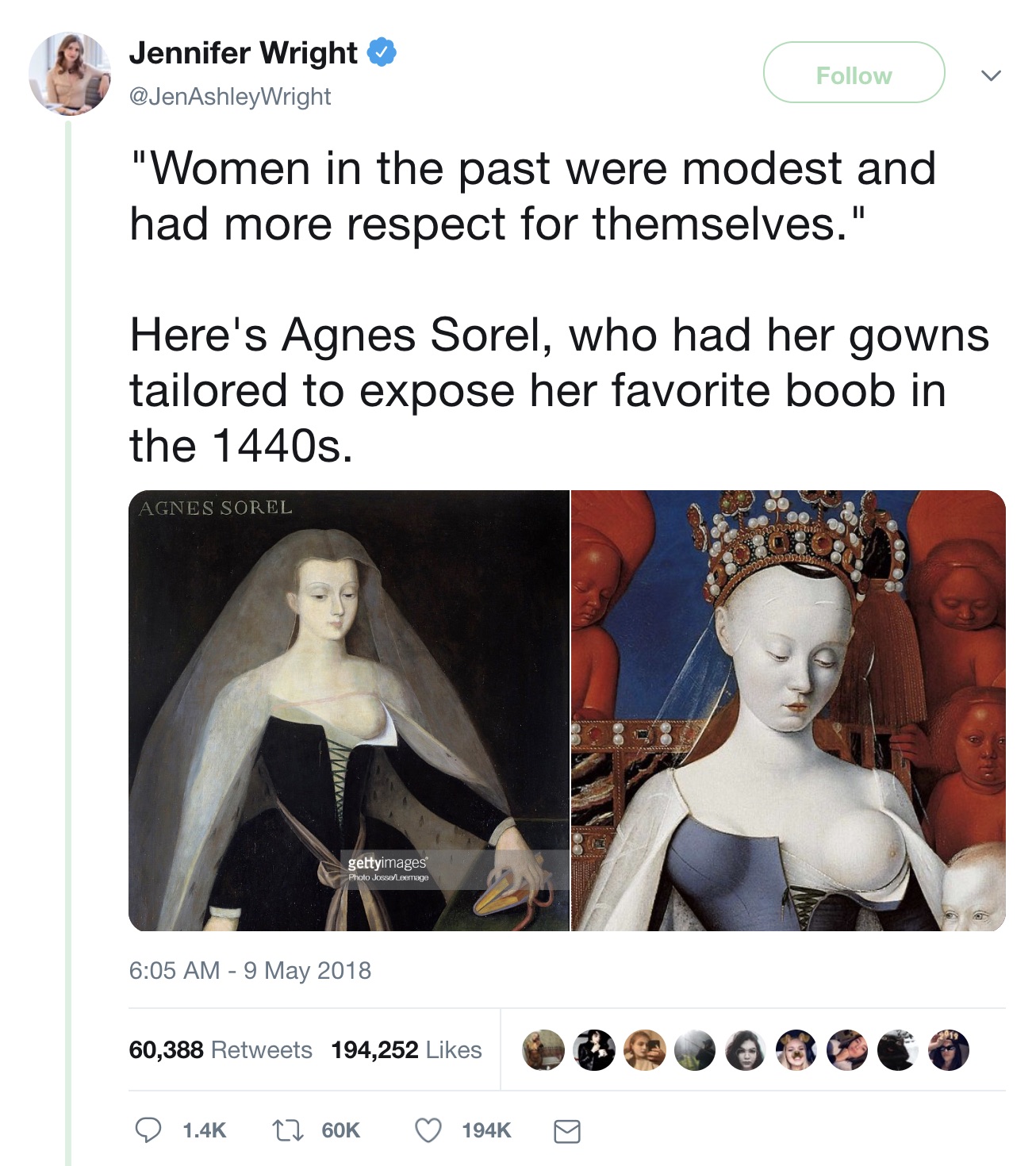 “Women in the past were modest and had more respect for themselves.”

Here’s Agnes Sorel, who had her gowns tailored to expose her favorite boob in the 1440s.

The poster added additional tweets to the original that indicated the source for her claim was Wikipedia:

Wright pointed to an entry for Sorel, which categorized her as a mistress of King Charles VII. The excerpted portion was attributed to a 2005 book, Histoires de Mode:

Agnès Sorel (1422 – 9 February 1450), known by the sobriquet Dame de beauté (Lady of Beauty), was a favourite, and chief mistress, of King Charles VII of France, by whom she bore four daughters…. Sorel generated scandal at court, particularly for championing the fashion of her wearing of low-cut gowns with a single breast fully bared. This behavior was both imitated and scorned. Jean Juvénal des Ursins, the archbishop of Reims, counseled the king to correct such fashions as “front openings through which one sees the teats, nipples, and breasts of women” (ouvertures de par devant, par lesquelles on voit les tetins, tettes et seing des femmes).

The claim seems well supported at first glance. A Vice article (“The Untold Story of a Legendarily Topless Mistress Who Saved France”) reported:

Sorel was scandalized as a devilish schemer and a slut. Many writers of the time — rivals to the crown — indulged in gossip of illicit affairs and infidelity. Georges Chastellain, ally to Sorel’s biggest adversary, Louis, the Dauphin of France and the king’s son and heir, wrote: “All the women of France and Burgundy lost much in modesty in wanting to follow the example of this woman.” He failed to mention, of course, that the “good duke” of Burgundy he also served had no less than 27 mistresses of his own.

Painter Jean Fouquet crystallized the image we most associate with Sorel today; the single breast-baring Virgin in his Virgin and Child with Angels is widely believed to be modeled on Sorel. According to Rainer and Rose-Marie Hagen, authors of What Great Paintings Say, Sorel was the obvious choice for the Virgin, since she was considered by many at the time to be “the most beautiful woman in the world.” The dazzling pose was later replicated by an anonymous artist in the other, unnamed famous Sorel painting from the 16th century.

However, that piece was inspired by Wright’s tweet and published after it became virally popular on Twitter:

Despite Sorel being effectively reduced to that one exposed breast in art and memes alike, the evidence, as noted by medievalist Rachel E. Moss, that she actually dressed like this is scarce. Chastellain did accuse Sorel of being the “producer and inventor” of inappropriate styles of dress, which politician Jean Jouvenel des Ursins described as including “front openings by which one sees the teats, the nipples, and breasts of women.” But, as we already know, Chastellain was pretty salty about Sorel.

Claims about Sorel’s “one boob flash” style came before the tweet, but rested on the specific style of painting referenced — Nursing Madonna, Virgo Lactans, or Madonna Lactans, which was specific iconography featuring Virgin Mary breastfeeding the baby Jesus.

Sorel and her legacy made headlines in 2005, after her remains were exhumed and tested for evidence that she was murdered. In a Guardian piece published that year, Sorel’s purported penchant for freeboobing at court was presented differently:

Her extravagances were legendary: she invented the off-the-shoulder gown (which occasionally became the one-breast-in, one-breast-out gown) and spent fortunes on monumental fur-lined robes with trains of up to eight metres long, becoming the best client of the court’s principal merchant and financier, Jacques Coeur.

In that telling, it wasn’t even clear whether Sorel wore the breast-baring fashions. But another take was published days after Wright’s tweet went viral, presented by Dr. Rachel E. Moss, a University of Oxford lecturer in medieval history. Moss described the claim as “misleading at best,” drawing a line from the questionable source of material which made its way into Wikipedia:

Over the past few days, 53,000 people have retweeted a thread about Agnes Sorel, mistress of Charles VII of France. How cool — a popular thread about a medieval woman! Except that the thread is misleading at best. Jennifer Wright wrote: “Here’s Agnes Sorel, who had her gowns tailored to expose her favorite boob in the 1440s.” The two images chosen to illustrate this were a very famous painting by Jean Fouquet, and a sixteenth-century painting inspired by Fouquet’s. Fouquet’s portrait is fascinating not because of the bare breast per se, but because it depicts the mistress of the King as the Virgin Mary – specifically, as the Virgo Lactans, or the Nursing Virgin, a popular iconographical trope of the Middle Ages that connected Christ intimately to His human nature by showing He, like any other child, was fed by His mother’s breast.

That Sorel, who gave Charles four children and had a reputation for scandalous dress and behaviour, should be portrayed as the Mother of God is a very bold choice. Of course it’s tempting to think this choice was made because Sorel had already established a fashion for bearing her breasts – a claim made on her Wikipedia entry and in pretty much every article Google throws up if you search for her name. I have only been able to find a couple of primary sources that give any [indication] that Sorel bared her breasts in public, quoted within Sheila Delany’s academic survey of social constructions of the body in the fifteenth-century, Impolitic Bodies. Delany repeats the claim that Sorel bared her breasts (not one cheeky boob!) but this seems to stem from Georges Chastellain’s remark that Sorel was the producer and inventor of ribald fashions, and Jean Jouvenal des Ursins opining that the king ought to put a stop to feminine sartorial faults at court, including openings in the dress through which the breasts and nipples could be seen. It seems likely the ladies of the French court were pushing their boob game to new heights, but neither of these quotations suggest a nonchalant breast being popped out of one side of a tight bodice. Instead, the real scandal is that here we have a fashionable young woman openly in a sexual relationship with the king being depicted as the holiest, most beautiful and least sexual of women imaginable: the ever-Virgin Mary.

Moss cites another example of one-dimensional viral “facts” about women in history, and why she feels they do their subjects a disservice:

As a professional historian (for whatever that’s worth), I believe that there is an important ethical dimension to how I portray people who lived in the past. While my own work tends to take a postmodernist approach of treating texts as fictions, that doesn’t mean I believe I have the right to fictionalise others’ lived experiences to fit my narrative agenda … instead of churning out twitter threads about pistol-wielding ballerinas that diminishes the dehumanizing horror of the Holocaust, or writing popular books with titles that reduce their subjects to objects (Tim Desmondes’ Agnes Sorel: The Breast And Crotch That Changed History is a horrendous 2009 example), we might perhaps think of ways to use these eye-catching incidents in history to engage with the public in ways that reveal, rather than diminish, our historical subjects….

Now you can write twitter threads as long as your arm and with 280 characters per tweet, there’s really no excuse for leaving out the barest smidgen of historical context, or thanking the scholars whose work you are drawing on. Most importantly, you do more honour to the Badass Ladies of History you’re celebrating by placing them more firmly in a place we can attempt to understand their values, imagination and strength, rather than ascribing our own values wholesale to a misunderstood and murky past.

(This is why I will never have 50k+ followers on twitter, of course.)

As Moss notes, underlying historical information supporting the claim that Agnès Sorel had a signature single-breast baring style is thin to nonexistent (although her extravagant style is a matter of the historical record.) And as she also notes, the “badass female [descriptor]” backstory is practically guaranteed viral status on Twitter et al. Although Sorel’s life and place in history was fascinating and full of intrigue, the style of dress attributed to her appeared to stem from a very modern — and very imprecise — interpretation of history.