The 1988 animated film Akira predicted the 2020 Olympics would be in Tokyo, and that a pandemic (Coronavirus) would lead to its cancellation.

On February 27 2020, a Facebook user shared the following meme about the 1988 anime classic Akira, the 2020 Olympics, and plot elements which were reportedly strangely prescient: 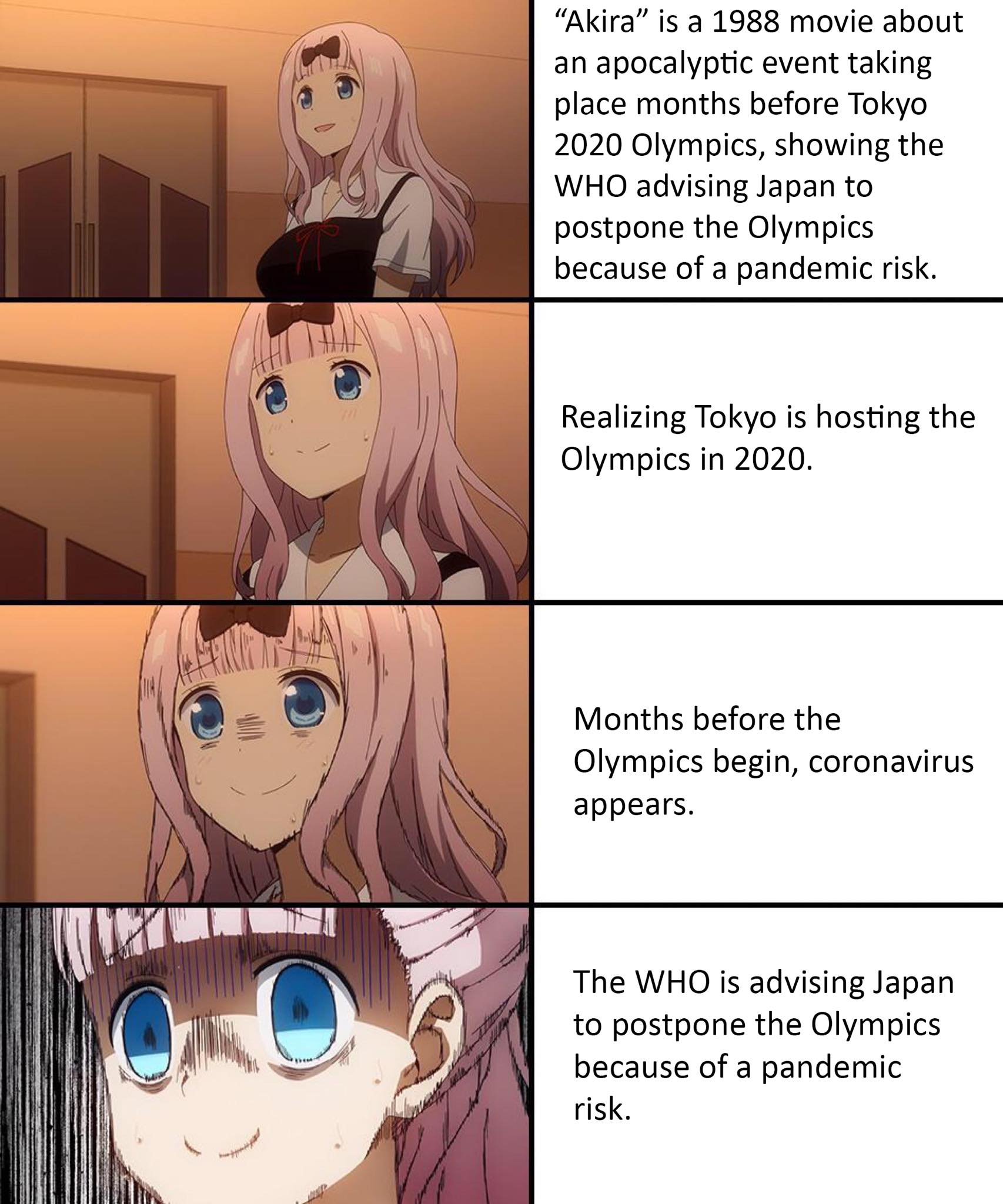 A four-panel meme featured images on one side, text on the other. In sequence (top to bottom), it read:

Realizing Tokyo is hosting the Olympics in 2020.

The WHO is advising Japan to postpone the Olympics because of a pandemic risk.

First of all, the image of the pink-haired girl is not from Akira; she is a character named Chika Fujiwara from an unrelated anime and manga series called Kaguya-sama: Love Is War, in a still that is frequently repurposed for various memes. The four claims were also something of a mixed bag, with some to do with the purported plot of Akira and others referencing world affairs as of February 2020 — namely, the spread of a novel strain of coronavirus known as COVID-19.

The 1988 animated Japanese film Akira was adapted from a manga series popular in the 1980s and 1990s.  The first panel of the meme referenced an apocalyptic event, but that wasn’t in the comic — which was set in 2019:

On 16 July 1988, a singularity destroys Tokyo. By 2019, Tokyo is rebuilt. Known as Neo-Tokyo, it is plagued by corruption, anti-government protests, terrorism, and gang violence and is on the verge of collapse.

Via the same resource, Akira‘s reference to Tokyo hosting the 2020 Olympics was not a novel discovery, either. Fans of both observed the coincidence after Tokyo was chosen following a bidding process in 2013:

When Tokyo was chosen to host the 2020 Summer Olympics in the 2013 bidding process, several commentators claimed that Akira predicted the future event.

The manga series Akira, created by Japanese Artist Katsuhiro Otomo, and first published in 1982, was set in the future: 2019. And though written long before a host city announcement was made, the backdrop for the action in Akira is eerily accurate: the fictionalized Tokyo was prepping to host the 2020 Olympics. This prediction and its relative implausibility might make you question the nature of time and space. How could Otomo have known? And while that’s a discussion for another day, the Tokyo Olympics have, in some sense, bridged space-time with the release of official posters to celebrate the Olympic and Paralympic Games—including manga.

On Reddit’s r/RetroFuturism, someone shared a screengrab from the Akira film as the 2020 Olympics in Tokyo approached (although we feel it is important to point out that this image does not show a scene involving the Olympics at all):

The 2020 Olympics in Neo-Tokyo, according to Akira (movie, 1988) from RetroFuturism

The meme’s first panel was the longest, and it claimed:

The first half of the first sentence seemed to be incorrect — Akira is a 1988 movie, and it involved an apocalyptic event, but the apocalyptic event in the film took place in 1988, not 2019. In the sentence’s second half, the meme claims the World Health Organization (WHO) advised Japan to postpone the 2020 Olympics in Tokyo due to a “pandemic risk.”

According to Kotaku, the second half of the sentence was both inaccurate and involved the manga, not the film adaptation:

As pointed out on the popular Japanese gaming site Hachima Kikou, in the third volume of Akira, the following panel reads, “The WHO (World Health Organization) criticizes [Neo-Tokyo’s] epidemic countermeasures.”

Rumors like the one cited above sometimes spread due to unfamiliarity with the source material, or speakers of one language relying on rumored translations of material like manga panels. Kotako explained:

The Japanese word that appears in the text 伝染病 (densenbyou) can be translated as “epidemic.” (Here is another example.) Coronavirus (COVID-19) is thankfully not an epidemic as of writing, and the Japanese media has been referring to it as 感染症 (kansenshou) or “infectious disease.” … As The Japan Times, where I am a columnist, reported late last month, the Japanese government and Prime Minister Abe have been facing criticism for its response to the coronavirus. The WHO, however, hasn’t recommended the need for contingency plans for the Tokyo Olympics.

Kotaku linked to a February 14 2020 Wall Street Journal article (“WHO Says It Hasn’t Advised About Altering Olympics Due to Virus”), which noted that it was not the role of World Health Organization to call off any event:

The World Health Organization said [on February 14 2020] that it hasn’t advised the International Olympic Committee about whether it should change plans for the Games in Tokyo this summer because of the epidemic caused by a new coronavirus.

Another element fueling the rumor about the purported threat of a pandemic in the plot of Akira involved graffiti visible in the film near a 2020 Olympics countdown sign. That sign displayed 147 days until the games began, and the graffiti read “just cancel it”:

A scene from the movie “Akira,” set in 2019, shows a signboard counting down the days until the Olympics. The sign reads “147 Days Until The Games” and encourages citizens to lend their support to making the event a success. Underneath, a message in graffiti reads, “Just cancel it!”

With [February 28 2020] marking exactly 147 days until the opening ceremony on July 24, and talk of the possibility of cancelling the games over the spreading coronavirus, the topic “Just Cancel it!” is now trending at the top of Japanese Twitter.

Presumably, the graffiti visible in Akira was not a warning from the WHO. A February 14 2020 tweet also appeared to highlight a pane from the years of Akira manga, and possibly served as the rumor’s source due to misreading by English-language users:

SoraNews24.com translated the text of the newspaper seen in the manga’s panel, and provided context:

In the top right corner of the scene there’re several columns of Japanese text, which look to be a public posting on the streets of Neo-Tokyo. Portions of the passage are cut off, but what can be read in the section boxed in red in @pcworks_kidd’s tweet starts with “World Health Organization’s response to infectious disease outbreak criticized.”

At the time of the manga’s creation, this was probably meant to be just another piece of incidental information letting the reader know how harsh the story’s world is. But flash forward to the real 2020, and Japan is indeed dealing with the coronavirus crisis, with new cases of infection still being discovered and the first death caused by the disease inside Japan occurring last week.

As the site noted, the 1980s and 1990s manga likely used the specter of a general pandemic in late 2019 to set a post-apocalyptic tone in Akira. And as indicated above, novel coronavirus or COVID-19 was neither a pandemic nor an epidemic, contrary to the claims of the original meme rumor.

Revisiting the meme’s four claims one by one:

A mix of true and false: Akira is a 1988 movie, but the apocalyptic event in it took place in July 1988, not 2019 or 2020. Neither the film nor the manga showed the WHO advising either Japan or the International Olympic Committee (IOC) to postpone the Olympics for any reason, and a pandemic risk was not a major plot point in either. However, one pane of the comic (not the film) on Twitter appeared to show a headline about a pandemic:

Realizing Tokyo is hosting the Olympics in 2020.

Decontextualized: Tokyo was set to host the 2020 Olympics, but that parallel was observed repeatedly after Japan won bidding in 2013 to host the event in 2020. Akira “predicting” the Olympics was old news.

True: Coronavirus was first identified in Wuhan, China in December 2019.

The WHO is advising Japan to postpone the Olympics because of a pandemic risk.

False: On February 14 2020, the WHO denied that it advised the IOC (or, by extension, Japan) to postpone the Olympics, adding it was never the WHO’s role to approve or call off any events.

A meme claiming that Akira predicted a coronavirus outbreak around the 2020 Olympics in Tokyo was misleading, possibly because of English speakers spreading rumors about source material in Japanese. It was long known that Akira had “predicted” the location of the 2020 Olympics in Tokyo, but two random panels from years of Akira manga were used to bolster the false claim that a plot point of the film involved a pandemic and the Olympics in Akira.

Retrofitting pop culture tidbits to be “predictive” remained a popular trend in memes, and like others of the sort, the “Akira predicted coronavirus” meme had a grain of truth with a lot of exaggeration piled on top of it.

We have emailed Kodansha Comics, which publishes and distributes the Akira manga series in the United States, to ask for more information.