On May 30 2020, the word “Amish” trended on Twitter, due to circulating social media posts claiming Amish people gathered to protest the death of George Floyd in Minneapolis:

The Amish came out yesterday in Minneapolis to join the George Floyd protests. pic.twitter.com/8L4g94l86l 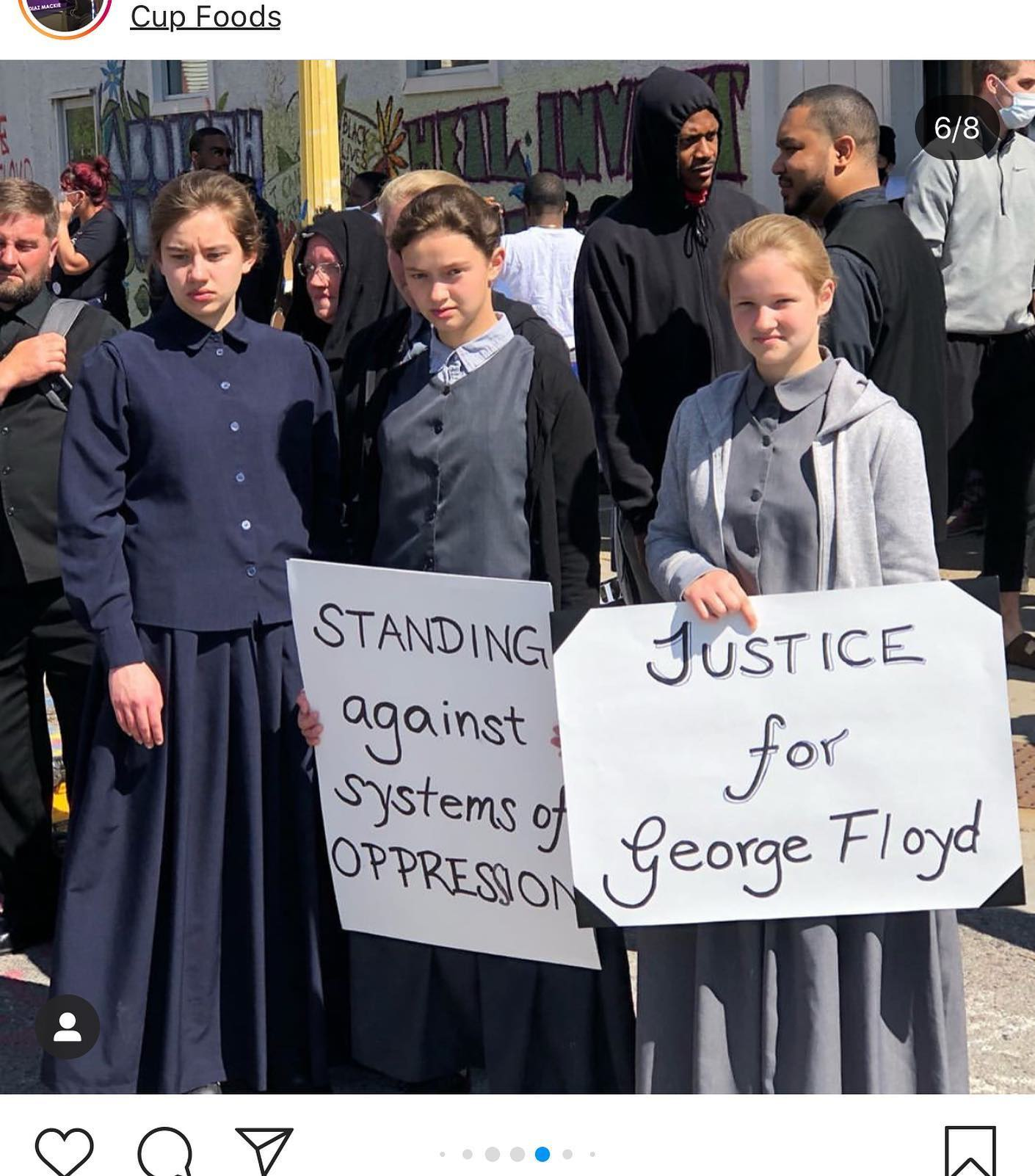 And more than 500,000 YouTube visitors viewed a May 29 2020 post which appeared to originally identify the protesters as Amish. The channel’s owner updated the description to indicate that they had amended their description after receiving information about the Amish and Mennonites from various sources:

I finally identified this group as ‘Church of God’ [link] and they are NOT Amish or Mennonite. They LOOK that way to me and many commenters said they are likely Mennonites. However I contacted them and they said they are not Mennonites. So I deleted the reference in the title. I don’t quite understand their origin, but actual Mennonite people have said they have nothing to do with them so I edited the title.

A Mennonite commenter explained why this group is NOT Mennonite: *They are neither Amish nor Mennonite, and are not related to either the Amish or Mennonite in any way, so you really shouldn’t identify them as such! This is a group that was founded in the 1980s, and grew out of Wesleyan pietism. The Amish and Mennonite sects, however are descended from the followers of Jacob Ammon, who came here from Switzerland in the 1700s. Simply because they have a similar mode of dress dues NOT mean it is okay to call the “Amish/Mennonite-ish”. They operate under a very different set of beliefs than do the Amish and Mennonite sects. Using the labels Amish or Mennonite to describe this group is wrong; it is akin to calling all Asians Chinese.*

Colorado gubernatorial candidate Peter Carr addressed the video and images on Twitter, identifying as a Mennonite and opining:

Everyone is misidentifying the group as #Amish

I believe they may be Old Order Mennonite, or Hutterite, or Mennonite Brethren. We all believe the same basic principal of peace👍

However, the YouTube video uploader and others asserted the protesters belonged to a faith that was neither Amish nor Mennonite — the Church of God:

So "Amish" is trending on Twitter, but it's really people of the Restoration end of the Church of God sect joining the protests. Very conservative but very nice people, apparently. In any case, Mennonites, Amish and especially Quakers are known for their social justice activism. https://t.co/ZsyrKTY3fq

Although we were unable to immediately verify the precise faith of the protesters, that sect did issue a May 27 2020 statement on Floyd’s death:

An Important Message from the Church of God Concerning George Floyd

Another injustice. Another killing of a defenseless black man by a white police officer—this time in Minneapolis.

As the Church of God, we send our deepest heartfelt condolences to the family and friends of George Floyd, as well as to the people of Texas, Minneapolis, and the entire United States who are touched by this tragedy. The video footage of this killing is absolutely inhuman, and this senseless act must be condemned by all people.

Tragically, many other African Americans have fallen victim to similar violence without the benefit of having it documented via video recording. What happened to George Floyd is not a single and isolated act of brutality but evidence of a system which mass-produces these heartbreaking results. Racism is not dead in our country.

This tragedy affects all of us. Injustice and oppression will be defeated only when we stand together in solidarity as one human family for the cause of truth.

“When the righteous are in authority, the people rejoice: but when the wicked beareth rule, the people mourn.” Proverbs 29:2

That site listed seven distinct congregations. A section on the site labeled “photos” indicated that Church of God members adopted a manner of dress similar to (but not identical to) Amish people.

The existence of that section alongside the abundance of photographs of the protesters in Amish-like attire appeared to be a clue about the faith of the individuals. Although Church of God maintained a web presence with a “photos” section, those of Amish faith do not like to be photographed if they can avoid it.