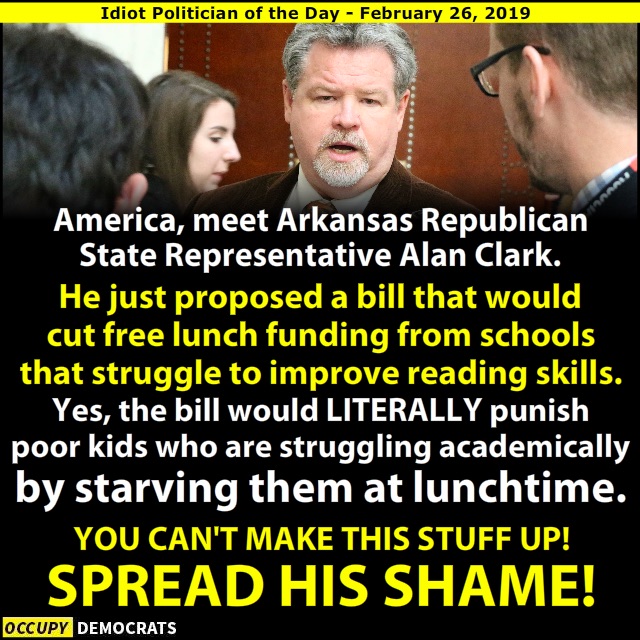 Text around a photograph of Clark read:

He just proposed a bill that would cut free lunch funding from schools that struggle to improve reading skills.

Yes, the bill would LITERALLY punish poor kids who are struggling academically by starving them at lunchtime.

YOU CAN’T MAKE THIS STUFF UP!

However, memes aren’t always a credible source of unbiased information. The meme identified the person shown as an Arkansas state representative, Republican Alan Clark. And indeed, initial reports (not all from local news outlets) reported Clark proposed a bill that would cut national school lunch funding in underperforming schools.

“Occupy Democrats” did include a citation for their claims in the comments, a February 21 2019 WKTR story composed primarily of comment from constituents about the purported legislation and a response from Clark. As of February 27 2019, Clark’s Wikipedia page stated he “proposed cuts to school lunch funding for schools where students did not read at a sufficiently high level.”

An Arkansas lawmaker has sparked an outcry over a proposed bill that could gut funding from public and charter schools that drop reading proficiency levels, with detractors arguing that the legislation would unfairly target low-income students and school districts.

Introduced Monday by conservative State Rep. Alan Clark of Garland County, the bill would target money from The National School Lunch State Categorical Funding, a state program that provides additional funding to schools based on the number of students who qualify at the federal level for free and reduced-price lunch programs. The money is intended to provide additional financial support to schools with higher numbers of low-income students.

If passed, SB349 would reduce funds allotted to schools where less than 70 percent of students in grades three through 10 fail to qualify as “ready” or “exceeding” the state’s reading readiness tests twice in a row. If the school failed to meet that benchmark three years in a row, all funding from the program would be pulled from the school, according to the proposed bill.

The outlet also linked to posts on Facebook shared by Clark defending his position on the bill in question, one of which concluded:

I believe in Arkansas. I believe in our educators. I believe in our kids. There is no reason for us to stay at 40.99% reading proficiency. Which is what I said when we were at 32%. Arkansas teachers have told me for over 7 years if we would remove the bureaucracy from what they do, they can compete with anybody. I believe that.

I am glad they taught this poor kid [Clark] to read. And my Mom and Dad. It opened the whole world up to us. We are not going to steal the futures from this generation because the Federal government or someone else thinks we are supposed to do everything but teach kids to read.

You can disagree. But don’t stand in the way. You will get run over.

Newsweek also reported that angry readers were conflating the bill with other legislation:

Several of the commenters on Clark’s Facebook page appeared to confuse his proposed bill with one that guts funding from the The National School Lunch Act, a federal program that provides low-cost and free meals to students from low-income families. In fact, Clark’s bill would reduce funding through a state program that relies on that federal data to allocate funding to low-income schools, where it is supposed to be earmarked for after-school programs, tutoring and other services.

WREG in Memphis covered the controversy but their reporting was light on details, simply asserting that one “Arkansas lawmaker wants to get more students reading by putting money on the line — specifically, their lunch money.” Some outlets linked to a copy of Arkansas Senate Bill 349 [PDF], which on first glance appeared to possibly substantiate claims that Clark sought to reduce National School Lunch funding to schools that drop below a certain level of “reading readiness” after specified periods of up to three years of assessment:

Little Rock news station KATV examined the ongoing controversy on February 20 2019, reporting that Clark denied the bill would affect access to school lunches, and describing claims to the contrary as “false reports.” The Arkansas Hunger Relief Alliance also commented to say that Clark correctly described the bill, but added that they did not support it:

KATV is taking a closer look at school funding cuts proposed by an Arkansas lawmaker after false reports that it would affect school lunches.

“It used to be called poverty index and lawyers way back said because we tied to it how many kids are on free or reduced lunch program, we should rename it this,” said Clark. “Since that’s the fund, a lot of people were confused and, as you know, lots of people falsely reported that we were taking away kids free and reduced lunches — which, of course, is ridiculous.”

The Arkansas Hunger Relief Alliance has also verified that the bill does not affect school lunches. But the group is still not supporting the bill.

Long before the proposal reached broader audiences, a February 19 2019 Arkansas Times blog post covered what was then a more localized controversy. In that item, the author expresses regret for adding to confusion about the bill. Like the Arkansas Hunger Relief Alliance, they state they do not agree with the proposal — but add that it has nevertheless been mischaracterized:

I Tweeted [one day prior] that Clark had proposed to “cut poverty funding to schools with low test scores, typically the poorest schools.” That’s accurate. I also posted a link to the bill. Many readers read the bill and were horrified by the title, which says in part that it is: “to reduce the amount of national school lunch state categorical funding … if the overall reading readiness is below a certain percentage.”

I knew what this meant. Many did not. School lunch categorical funding is shorthand for a special financial payment that is distributed for instructional help and other purposes to schools with high percentages of poor students as determined by the number eligible for free or reduced-price lunches. Thus, though it is national school lunch state categorical funding, it is NOT “lunch money.”

It’s still flawed. As an education specialist put it: “It’s completely ass backwards because it cuts funds to the schools that need them most, but it would not cause kids to starve.”

I knew that all along. But to the extent I contributed to the confusion, sorry.

Conway, Arkansas newspaper the Log Cabin Democrat published an editorial on February 27 2019 titled “Senator wants to starve kids!” In it, the author decries inaccurate reporting around Clark’s bill. He begins by stating that Democracy is difficult, but “harder when journalists don’t do their jobs,” adding that the Arkansas bill “sounds like it cuts school lunches for poor kids, but doesn’t.”

The author points out that the proposal has gained national attention, and says that he was one of four journalists who spoke to Clark about its provisions:

Senate Bill 349 by Sen. Alan Clark, R-Lonsdale, would set up a process for reducing and then ending National School Lunch Act state categorical funding for some poorly performing districts.

If you read that quickly, what word stood out? For many, it’s “lunch.” That’s especially the case for those who also might be inclined to react unfavorably to the “R” beside Clark’s name.

The bill actually has nothing to do with cutting lunches. A small part of state education funding is based on the amount of federal dollars schools receive for free and reduced price lunches through the National School Lunch Act. The state’s NSLA categorical funding comes from a different pot and is meant to fund anti-poverty programs.

Clark’s bill would create a three-year process whereby lower-scoring schools would first have to obtain training in the science of reading. They then would lose some of their funding if they showed no improvement the next year. They would lose all of it if they didn’t improve the next.

“National School Lunch Act categorical funding” is boring, bureaucratic language, but it’s a journalist’s job to wade through these things and actually read bills – especially these days, when our work is sometimes the first draft to be copied and reposted on social media to suit other people’s agendas.

The claims about “boring” and “bureaucratic” nomenclature around the National School Lunch Act is echoed in a 2010 piece published by the Northwest Arkansas Democrat Gazette. In that unrelated reporting, the word “lunch” only appears in relation to funding tied to the Act, and how it is used as a metric:

In Fayetteville, for instance, the study shows the district didn’t spend more than $150,000 in National School Lunch Act categorical funding from the state during the 2008-09 fiscal year. The federal act provides funding that allows schools to initiate programs designed to help children in poverty improve their academic achievement.

The National School Lunch Act funding allocates a specific dollar amount to school districts, based on the number of students who are eligible for free and reduced price school meals. That eligibility is often used as a measure of poverty within a district or an individual school.

Another portion of the article explains how the Act is used as an index of poverty in a given district, and how that funding relates to literacy initiatives:

As the 2010 article demonstrates, National School Lunch Act money was used to fund salaries, programs, and software purchases — not lunches. Going back to Alan Clark’s SB 349, it proposes to reduce funding from the same program if schools fail to reach specific benchmarks of reading readiness.

The meme stated that Clark’s bill would “punish poor kids” by “starving them at lunchtime,” but even opponents of the bill at a local level said the claim was false. Poverty advocacy groups and policy wonks in Arkansas have expressed a lack of support for Clark’s bill, while simultaneously agreeing that it does not in fact impact school lunch programs in its provisions. We emailed Alan Clark for further clarification on the bill’s provisions and how the legislation has been possibly misunderstood.

Update, February 27 2019, 4:11 PM: State Senator Clark responded to our inquiry within a few hours, affirming that initial press reports about the bill’s effects were inaccurate. He explained:

First, the United States Department of Agriculture runs and controls the Federal Free and Reduced Lunch Program and a state senator could not do away with reduced lunches if he wanted to. Which I do not.

The problem started with local TV broadcasters going for sensationalism rather than checking their facts.

Yes, the program is unique to the state. The National School Lunch fund was given that name, I am told, because attorneys years ago thought it was more appropriate than Poverty Index which was its former name. The name comes from the fact that the funding is DISTRIBUTED based on how many students in a school receive free and reduced luncheons.

The fund was started for one reason, to reduce the gap in educational attainment between impoverished students and others. It has utterly failed at that although we have spent over $2 billion in the quest.

It has been a tempest in a teapot. We never intended to [remove] funds from anyone. The bill required that a school raise their overall reading proficiency by .0001 over 2 years. Another bill which is more focused is already being written which is not unusual in what we do.

But regardless, you were correct, the claims that our bill would take away school lunch funding was NOT TRUE.