In 2015, the following content (archived here), an apparent Tumblr screenshot describing the purported backstory for the preschool book series and television show Max & Ruby, started to circulate on social media: 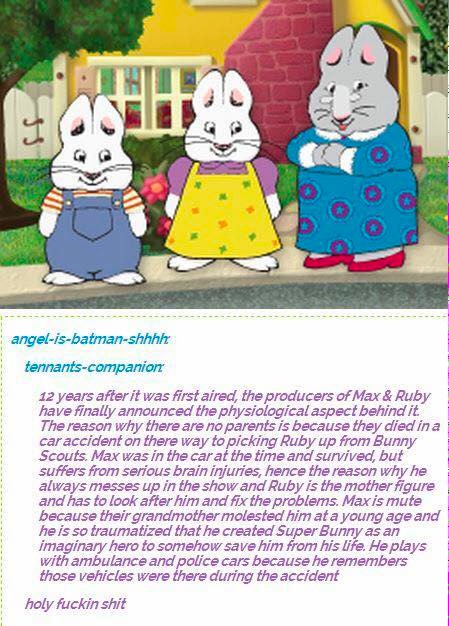 Underneath a still from Max & Ruby were comments from an original poster and another person. The first said:

12 years after it was first aired, the producers of Max & Ruby have finally announced the physiological aspect behind it. The reason why there are no parents is because they died in a car accident on there way to picking Ruby up from Bunny Scouts. Max was in the car at the time and survived, but suffers from serious brain injuries, hence the reason why he always messes up in the show and Ruby is the mother figure and has to look after him and fix the problems. Max is mute because their grandmother molested him at a young age and he is so traumatized that he created Super Bunny as an imaginary hero to somehow save him from his life. He plays with ambulance and police cars because the remembers those vehicles were there during the accident.

The provided details were extremely dark, with Ruby’s participation in “Bunny Scouts” seemingly the entrance point for all the horror into their adorable furry lives (and it didn’t escape our notice that it’s all her fault in this rendering.)

The show began airing on Nickelodeon’s Nick Jr. block of programming in 2002. In a NickJr.com interview with Max & Ruby‘s creator, creator and children’s book author Rosemary Wells says nothing about these supposed traumas endured by the bunny stars of the show:

Ruby is seven and Max is three. Their relationship is based on my two kids when they were seven and three. Even though they love each other, Max and Ruby have very different ideas about everything. Max is mischievous and disorganized. Ruby is bossy, determined, and very organized. In each story Max wants one thing and Ruby wants something entirely different.

As in most other classic stories, we don’t see Max and Ruby’s parents, because I believe that kids resolve their issues and conflicts differently when they are on their own. The television series gives kids a sense about how these two siblings resolve their conflicts in a humorous and entertaining way.

Plus, as a September 2016 CNet article describes, the rumor was put to rest by the introduction of Max and Ruby’s rabbit elders that year:

There are many unanswered questions in the cartoon world. How come Goofy can walk and talk like a human, but Pluto can’t, even though they’re both dogs? Why does “The Jetsons” theme song do nothing but recite the family’s names? How could Wile E. Coyote afford all those Acme products? And where are Max & Ruby’s parents?

Although the title of the piece was “Hoppy news: Cartoon bunnies Max and Ruby’s parents aren’t dead after all,” it made no reference to any claims to the contrary in its reporting. Its title likely referenced the well-worn trope most associated with Disney films in which horribly orphaned or abandoned children are the norm.

A September 2014 E! News article (“The Tragic Reason Why Disney Movies Rarely Have Mother Characters”) points to an interview with a tenured Disney producer on the exceptionally high maternal mortality rate in those works:

At this point, most Disney fans know that if they are sitting down to watch a Disney movie on a Friday night with a glass of red wine and their cats sleeping next to them (ugh, that sounds so amazing we wish we were doing that right now), they know that they’ll either be watching characters who lose their parents, or who just simply don’t have any. It’s a Disney thing.

In a revealing interview with Glamour, longtime Disney producer Don Hahn gave his two theories on why there are rarely any parents, or more specifically, mom characters in Disney films. One theory comes from a practical stand point, but the other theory stems from a truly tragic story from Walt Disney’s past.

After surmising the circumstances may be no more than a well-worn narrative device, Hahn is quoted directly on a second theory:

But this next theory about the lack of motherly characters is positively heartbreaking, and it comes from a little-known story about the man behind the magic: Walt Disney himself.

“The other reason—and this is really odd—Walt Disney, in the early 1940s, when he was still living at this house, also bought a house for his mom and dad to move into. He had the studio guys come over and fix the furnace, but when his mom and dad moved in, the furnace leaked and his mother died. The housekeeper came in the next morning and pulled his mother and father out on the front lawn. His father was sick and went to the hospital, but his mother died. He never would talk about it, nobody ever does. He never spoke about that time because he personally felt responsible because he had become so successful that he said, ‘Let me buy you a house.’ It’s every kid’s dream to buy their parents a house and just through a strange freak of nature—through no fault of his own—the studio workers didn’t know what they were doing.”

….”That idea that he really contributed to his mom’s death was really tragic. If you dig, you can read about it. It’s not a secret within their family, but it’s just a tragedy that is so difficult to even talk about. It helps to understand the man a little bit more. He had just made Fantasia, Dumbo, Pinocchio, Bambi, and Snow White in a five-year span. He buys a house for his mom and dad, they move down from Oregon, and his mom dies. Again, I’m not a psychologist to know it all, but it’s a really interesting story. To me, it humanizes Walt. He was devastated by that, as anyone would be.”

The claim that the titular characters in Max & Ruby had a tragic recent past leaned on pop culture awareness of orphaned Disney characters and a roster of complex backstories on shows like Sesame Street (which is known for its inclusion of storylines featuring autism, homelessness, AIDS, and parental incarceration) to suggest that the Nick Jr. bunnies also had a history of trauma.

However, while claims that Max & Ruby was set against a backdrop involving a gruesome post-Bunny Scouts accident, molestation, and traumatic brain injury looked potentially legitimate due to the use of weightier themes in other preschool programming, they didn’t hold water. No element of the show involved Max or Ruby overcoming any of these purported struggles described, and most tellingly of all, their parents eventually were introduced as characters on the show.