Irish suffragist Mary Maloney followed Winston Churchill around for a week, drowning him out with a bell every time he tried to talk.

In November 2019, the Facebook page “Cheerful Nihilism” shared the following meme, about historical tensions between a suffragist from Ireland named Mary Maloney and Winston Churchill: 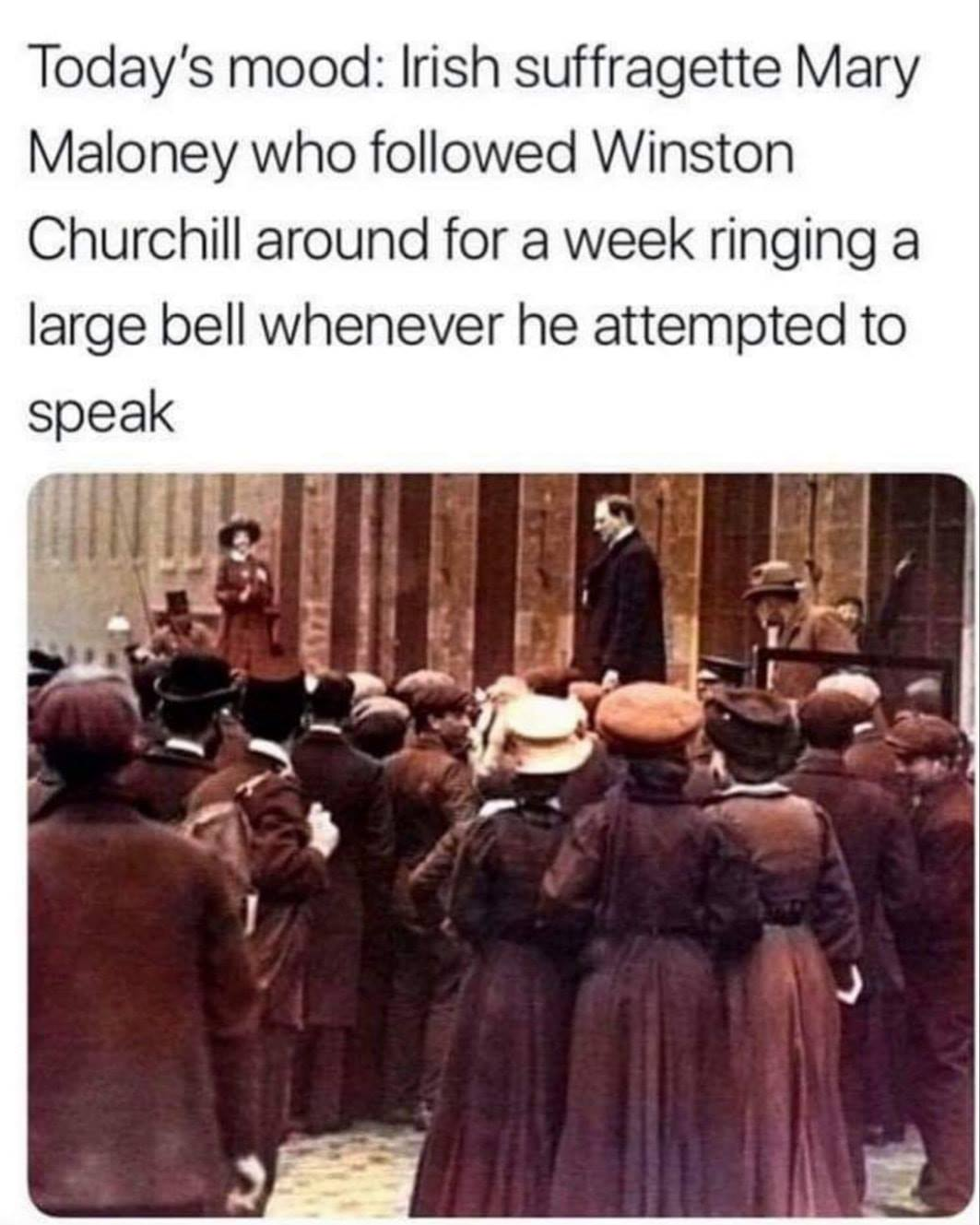 Above a black and white image of a man on a stage, an assembled crowd of people, and a woman off to the left, text read:

Today’s mood: Irish suffragette Mary Maloney who followed Winston Churchill around for a week ringing a large bell whenever he attempted to speak

The claim was not new, tweeted in January 2018 by Crimes of Britain:

Irish suffragette Mary Maloney followed Winston Churchill around during his engagements in Dundee, Scotland, and would ring a loud railway bell every time he got up to speak.

It also showed up on Reddit’s r/HistoryPorn the same month (later on r/HistoryMemes, titled “BIG BELL ENERGY”), as well as r/TIL (“today I learned“), and later on r/Ireland:

Winston Churchill campaigning in Dundee in 1908, and on the left, Irish suffragette Mary Maloney, who followed him for a week ringing a large bell every time he started to speak. [933 x 768] from HistoryPorn

Reddit’s r/Ireland linked to an Irish Central article, based on a then-popular post to Instagram (featuring the “Today’s mood” version):

Maloney and her bell were also featured in a post to the site WomensHistoryScotland.com in March 2018, featuring the same image as the memes:

Central to [“comparatively more suffrage activity in Dundee” Scotland] was the fact that the then Prime Minister’s constituency was in East Fife and Winston Churchill was standing Liberal MP for Dundee in 1908. At this point Churchill was a rising star in the party, President of the Board of Trade and would go on to be Home Secretary in 1910. As a result Dundee was a high profile constituency and thus a strategic target of suffragette militancy. One of the most famous disrupting [strategies] was taken by Mary Maloney a member of the WSPU who would ring a bell every time Churchill addressed a crowd in Dundee (see image above).

On a page devoted to the Dundee Suffrage Movement, the University of Dundee explained:

The MP Winston Churchill, who would hold the position of Governor of University College in addition to his more well-known roles, was targeted by the movement. When he came to stand as MP in Dundee in 1908 he was followed by a group of suffragettes and forced to hide in a shed to hold his meeting. Mary Maloney, a member of the Women’s Freedom League, rang a bell to drown him out whenever he tried to speak[.]

Maloney and her bell were also mentioned in the 2014 book Young Titan: The Making of Winston Churchill, on pages 174 through 177. Wikipedia’s page on the 1908 by-election in Dundee read in a section:

Whenever Churchill spoke, Maloney produced a swinging dinner bell which drowned out what he was saying. The ding-dong exchanges were taken in fun initially, but some meetings had to be cancelled because of the uproar.

However, those retellings were modern, and the anecdotes seemed relatively novel in terms of historical memes. An informal archive of articles in the Illustrated London News mentioned May 1908 reporting on Maloney, Churchill, and the bell, but did not include an actual newspaper clipping.

We found an archival clipping dated May 9 1908 via The British Newspaper Archive, a subscription-based service: 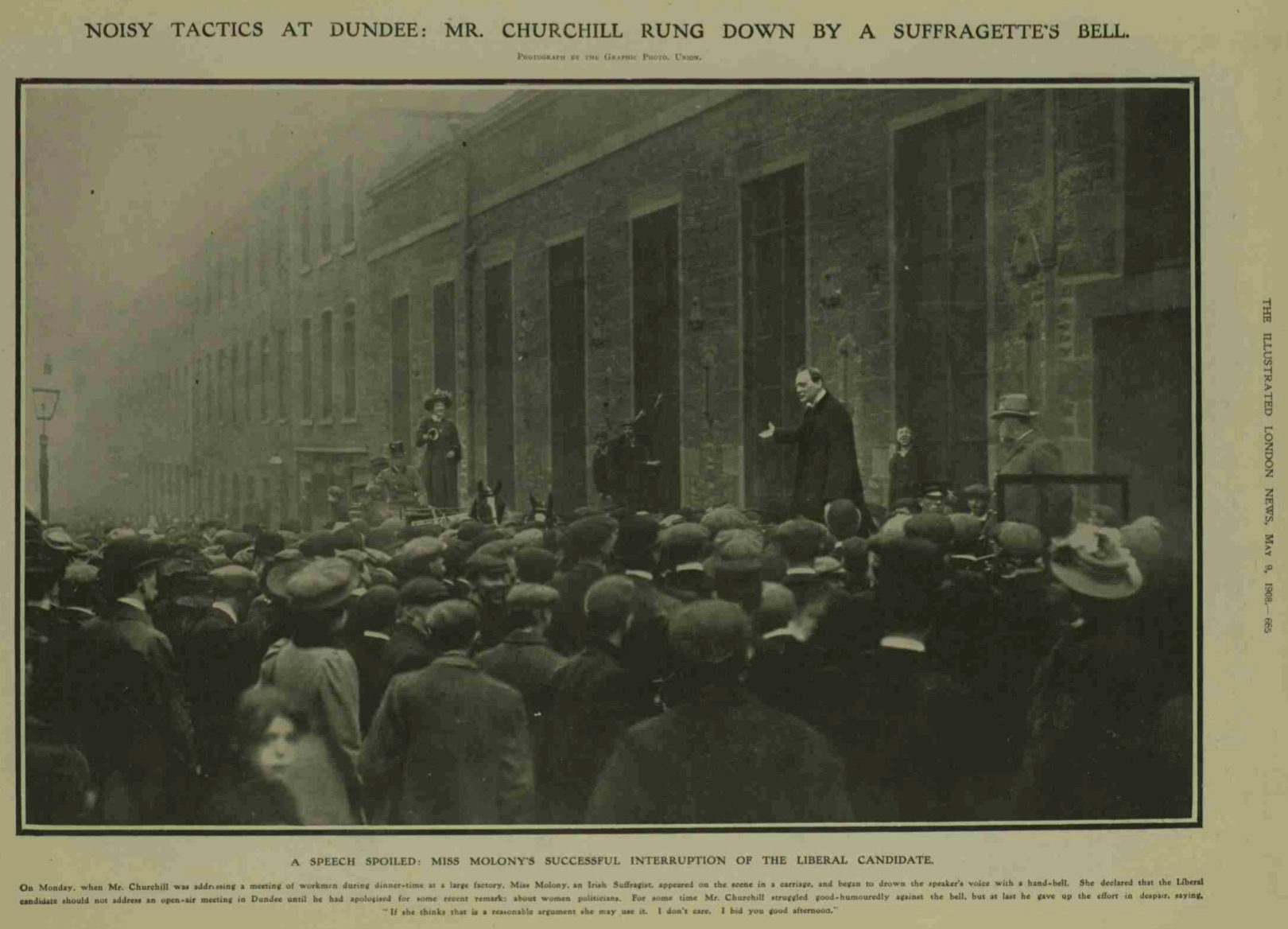 Above an image like the one in the Maloney versus Churchill memes, a headline read: “NOISY TACTICS AT DUNDEE: MR. CHURCHILL RUNG DOWN BY SUFFRAGETTE’S BELL.” Under the photograph, text read:

On Monday, when Mr. Churchill was addressing a meeting of workmen during dinner-time at a large factory, Miss Molony, an Irish Suffragist, appeared on the scene in a carriage, and began to drown the speaker’s voice with a hand-bell. She declared that the Liberal candidate should not address an open-air meeting in Dundee until he had apologised for some recent remarks about women politicians. For some time Mr. Churchill struggled good-humouredly against the bell, but at last he gave up the effort in despair, saying, “If she thinks that is a reasonable argument she may use it. I don’t care. I bid you good afternoon.”

The site IndieTours.biz located an article published by The Irish Times on May 5 1908. Maloney wasn’t mentioned by name, but the bell-ringing when Churchill spoke in Dundee at the time was referenced — slotting in to the claim Maloney followed him for a straight week. Indie Tours quoted the archival material:

[Maloney] complained of a passage in a speech which the latter delivered on Saturday last, and in which, alluding to the women’s suffrage movement, he said – “I have seen with some regret some most earnest advocates of the cause allying themselves with the forces of drink and reaction. They were carried shoulder-high, I am informed, by the rowdy elements, which are always to be found at a publichouse-made manifestation.”… Amid great laughter Miss Maloney retorted that if any man attempted to lift her in his arms she would have boxed his ears…

At the time appointed for him to address the meeting (and when there were about 500 or 600 present), Mr. Churchill drove up in his motor car only to find that the gathering was in full possession of the ladies… who had the sympathy of a goodly majority of the crowd… Mr. Churchill re-entered the vehicle and was about to speak from it when the Suffragette carriage came up, a lady inside loudly ringing a bell. The carriage drew close up to the motor, the bell clanging all the time, and creating so much din…

The lady said to be Miss Maloney shook her fist at the right hon. gentleman, and exclaimed in a loud voice, “Who is the strongest — an Irish woman or Mr. Winston Churchill?”

It is true that Mary Maloney and her clanging bell of suffrage as she stalked Churchill sounded as though it was almost too amusing of a modern invention to be real, and further true the tale seemed to spring up from nowhere sometime in 2018. But Maloney and her bell were real, and based on news accounts she harangued Churchill for the better part of a week, ringing it loudly each time he tried to speak and successfully chasing the flustered leader from at least one appearance.