Sen. Mitch McConnell (R-Kentucky) once said, "I am completely and utterly perplexed by those who argue that perjury and obstruction of justice are not high crimes and misdemeanors."

In November 2019, a screenshot from Reddit circulated on social media, quoting Sen. Mitch McConnell (R-Kentucky) as saying he was baffled by people who argued “perjury and obstruction of justice are not high crimes and misdemeanors” when remarking on the impeachment of former United States President Bill Clinton: 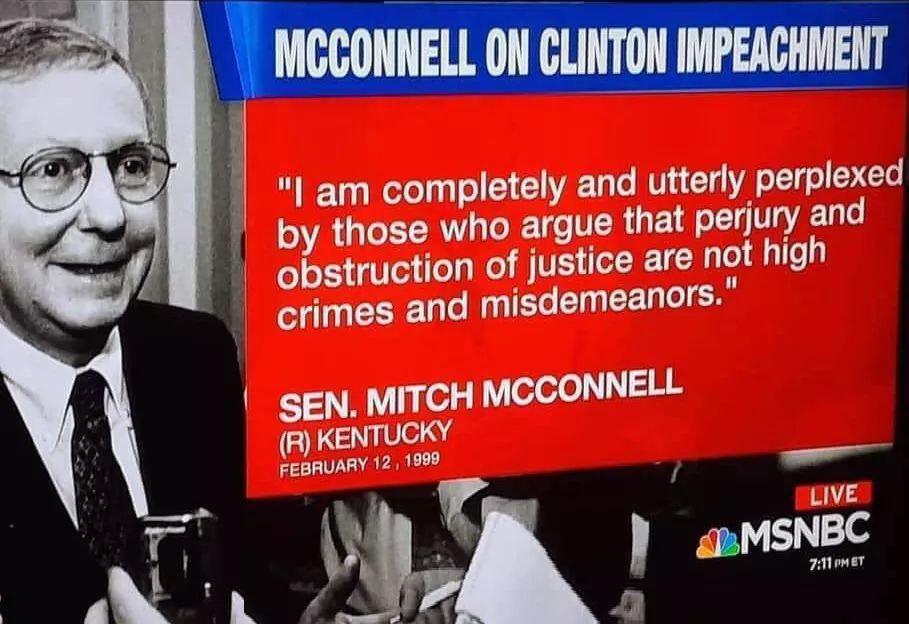 An MSNBC logo and a timestamp (7:11 PM EST) were in the lower right corner, and from the top down, text against a photograph of a smiling McConnell read:

“I am completely and utterly perplexed by those who argue that perjury and obstruction of justice are not high crimes and misdemeanors.”

MSNBC first began broadcasting in 1996, three years before the date of the purported quote. However, tweets of the same screenshot and angle showed the original was slightly larger and that it was a literal screenshot — a photograph taken of a modern broadcast:

Remember when he said this? He is full of crap and hot air! pic.twitter.com/B8toPz4bqn

"I am completely and utterly perplexed by those who argue that perjury and
obstruction of justice are not high crimes and misdemeanors." — Mitch McConnell, 2/12/99.

Another iteration was shared to Reddit’s r/The_Mueller in April 2019, and again in June:

Mitch McConnell: I am completely and utterly perplexed by those who argue that perjury and obstruction of justice are not high crimes and misdemeanors. from The_Mueller

Commenters described McConnell’s purported stance on U.S. President Donald Trump’s impeachment as “hypocrisy,” and the same quote was shared to r/RepublicanHypocrisy in October 2019. All but one comment on an April 2019 share of the quote to r/AskTrumpSupporters was hidden by downvoting. Discourse around the purported quote focused on McConnell’s imagined hostility toward impeachment rumblings and the sitting Republican president.

A top search result was archival reporting from 1999. In what looked like an ancient CNN page, “Sen. McConnell’s closed-door impeachment statement,” the Senator said in part:

On social media, McConnell’s full-throated support of Clinton’s impeachment was widely seen as hypocritical. But in October 2019, The Hill called McConnell’s impeachment history “complicated.” A POLITICO item about Senate leaders McConnell and Chuck Schumer (D-New York) examined each of their “ghosts” of impeachment past, and their cross-aisle experiences between two presidential scandals:

The year was 1998 and it was President Bill Clinton who was under siege by an impeachment inquiry, just as President Donald Trump is now. At the time, Chuck Schumer was blasting the impeachment drive while Mitch McConnell called for all sides to stick to the facts.

In the intervening 21 years, Schumer and McConnell might as well have swapped talking points.

The politics of impeachment have always revolved around hypocrisy and partisanship. These days, it’s just become easier to see. YouTube readily delivers embarrassing evidence of high-profile flip-flops: videos of Sen. Lindsey Graham (R-S.C.) arguing for impeachment in the ’90s have been a staple of Democratic Twitter accounts for weeks.

At the same time, the New York Times suggested that McConnell viewed impeachment as inevitable. The Hill’s coverage surmised:

Senate Majority Leader Mitch McConnell (R-Ky.) opposed a motion to dismiss articles of impeachment in 1999, calling a Democratic proposal to quickly dismiss the trial of then-President Clinton “a terrible idea.”

McConnell, then the chairman of the Senate Rules Committee, made it clear he thought the Constitution required the Senate to hold a full trial on the articles of impeachment Clinton was facing for perjury and obstruction of justice, culminating in a vote on whether to convict or acquit the president.

McConnell’s past position will make it difficult for him to champion any motion to dismiss a Senate trial of articles against President Trump, and McConnell [in October 2019] appeared to dissuade his colleagues from entertaining a dismissal.

On October 30 2019, the Associated Press reported:

From the Senate floor, McConnell (R-Ky.) specifically called out House Speaker Nancy Pelosi and Trump-basher Adam Schiff, chairman of the House Intelligence Committee, for their impeachment efforts and called it “a bizarre process.”

He described “an impeachment inquiry as about the most solemn and serious process the House of Representatives can embark on,” but said that “instead of setting a high bar, House Democrats seem determined to set a new low.”

Memes quoting Sen. Mitch McConnell as saying he was “completely and utterly perplexed by those who argue that perjury and obstruction of justice are not high crimes and misdemeanors” during a November 2019 impeachment news cycle contained a real quote, accurately described. Along with them was a tacit suggestion that McConnell was “hypocritical” for racing to impeach a president of the other party, presuming he was loath to comply with proceedings in 2019.

For obvious partisan reasons, McConnell did not seem thrilled about the looming congressional tension, but neither did those feelings extend solely to the GOP. The same contrast of impeachments in 1999 and 2019 went the other way, where Democrats of the Clinton era were similarly reticent to see him impeached. The quote is legitimate, but the context is nuanced.