Sen. Bernie Sanders told his supporters: "I will never tell you how to vote. If I do, don’t listen to me."

On April 13 2020, former presidential candidate and Vermont Sen. Bernie Sanders endorsed Joe Biden, causing memes and tweets that attributed a quote to Sanders (“I will never tell you how to vote. If I do, don’t listen to me”) to recirculate:

"I will never tell you how to vote. If I do, don't listen to me." -Bernie Sanders pic.twitter.com/fx4oxVAEHB

Comment threads were peppered with a common version of the meme, one featuring Sanders (but not former opponent Hillary Clinton): 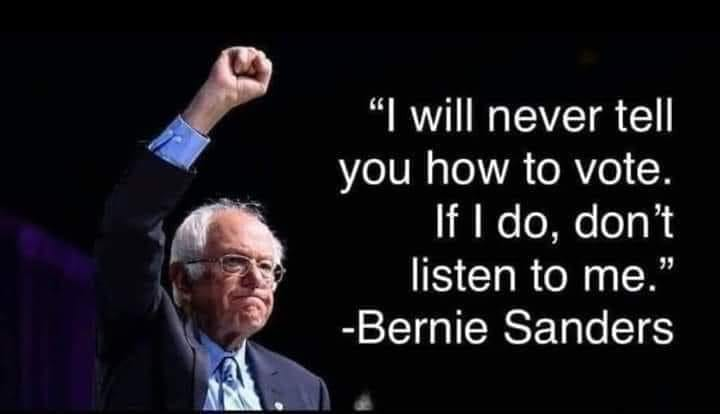 In April 2020, a 2016 Reddit thread about Sanders’ purported statement circulated as well:

"I will never tell you how to vote. If I do, don’t listen to me" -Bernie Sanders from Kossacks_for_Sanders

Although references to the supposed statement by Sanders swearing off endorsements and urging supporters not to heed them in any event were plentiful, none of the references linked back to any particular original iteration. Presumably due to its age, Sanders would have made the comment during his 2016 campaign, if the statement was at all authentic.

We located what appeared to be the source comments by Sanders, from an April 2016 MSNBC town hall event. A participant asked:

Well, David, thanks for the question. And let me answer it, uh, in this way.

Um, first, um, I think it is, you know, we are not a movement where I can snap my fingers and say to you or to anybody else what you should do, because you won’t listen to me. You shouldn’t. Uh, you’ll make these decisions yourself.

I think if we end up losing — and I hope we do not — and if Secretary Clinton wins, it is incumbent upon her to tell millions of people who right now do not believe in establishment politics or establishment economics, who have serious misgivings about a candidate who has received millions of dollars from Wall Street and other special interests.

She has got to go out to you and to millions of other people and say, yes, I think the United States should join the rest of the industrialized world and take on the private insurance companies and the greed of the drug companies and pass a Medicare for all. I think that says Secretary Clinton, that for the young people in this country, you should not have to leave college $30,000, $50,000, $70,000 in debt because we’re going to make as many other countries around the world do, public colleges and universities tuition-free. I think Secretary Clinton is going to have to explain to millions of young people and a lot of other people that climate change is a real crisis and incrementalism is just not going to solve it …

… And she is going to have to come on board and say, yes, I know it’s hard, but I am going to take on the fossil fuel industry and pass a carbon tax. So the — the point that I am making is, it is incumbent upon Secretary Clinton to reach out not only to my supporters, but to all of the American people, with an agenda that they believe will represent the interests of working families, lower income people, the middle class, those of us who are concerned about the environment and not just big money interests.

It appeared in 2020 that Sanders’ remarks were condensed down to “I will never tell you how to vote, if I do, don’t listen to me,” but that was a misleading distillation of his actual statement. What Sanders actually said was his base of support was “not a movement where I can snap my fingers and say to you or to anybody else what you should do, because you won’t listen to me,” adding “you shouldn’t.” But he continued, stating it was “incumbent upon” then-candidate Hillary Clinton to win over supporters who had “serious misgivings” about aspects of her platform.