Image depicts a person's destroyed kitchen after they tried to microwave a coronavirus mask during the COVID-19 pandemic.

On April 7 2020 — in the middle of the COVID-19 pandemic — a post began spreading on Facebook, warning people against microwaving face masks to sterilize them (alongside a photograph of the aftermath of a kitchen fire):

Please don’t pass along the suggestion that people microwave their masks to kill germs. Why? Because if someone forgets there is a metal nose wire in their mask, you could be called on to help rebuild their lives after the microwave blows up and the house burns down.
Wash or boil in hot water only please. 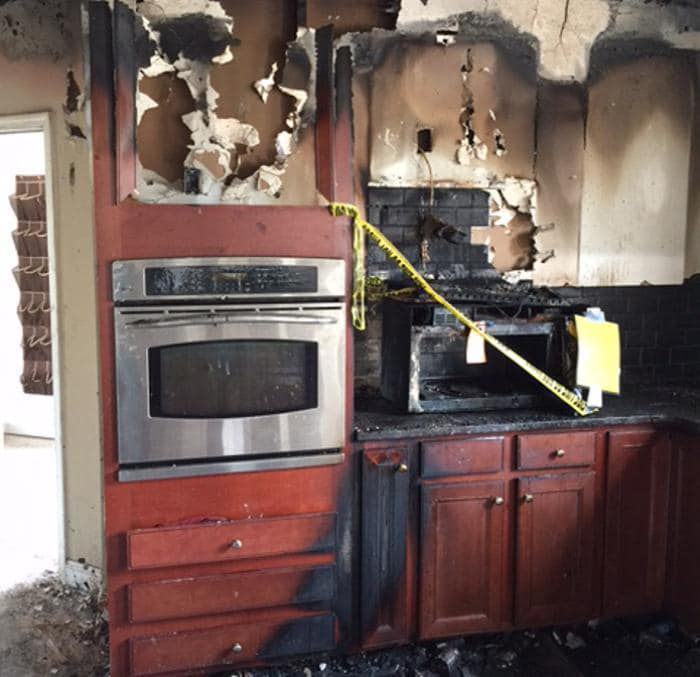 As of April 14 2020, the original poster hadn’t added any details or context to the post about the image. Moreover, Facebook added a “true” rating to the viral post, so the whole shebang looked like this: 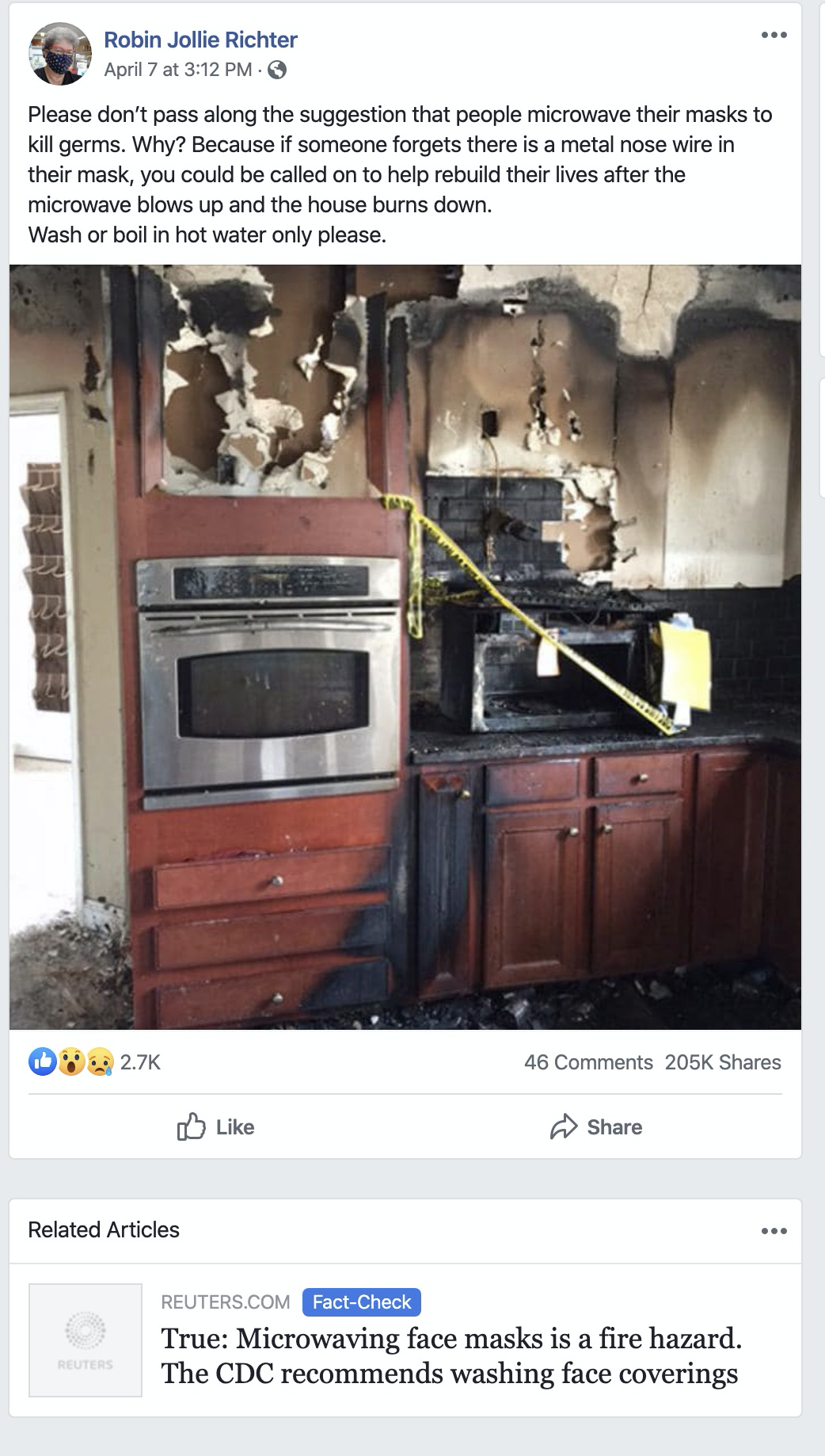 The commentary appeared as thought it might be a response to a viral piece of advice correctly attributed to Meharry Medical College chief executive officer, Dr. James Hildreth:

Did the President of Meharry Medical Advise Sterilizing Cloth Face Masks in the Microwave Between Uses?

There’s a national urgency — and I’m gonna repeat this — that the PPE must be reserved for healthcare providers and those on the front line. So many people have resorted to making homemade masks out of bandanas and other kinds of materials … there are a couple of things you really need to know if you’re doing this:

If the mask has served its purpose, there’s every possibility it’s contaminated on the outer surface. What that means is that you should do two things: wash your hands when you take it off, and sterilize it or sanitize it if you’re gonna use it repeatedly.

If possible, wash it in soap and water. And if it’s made out of cloth or has no metal staples in it, you can do what I do: stick it in a plastic bag, and microwave it for two or three minutes at the highest setting.

The implication in the more recent Facebook post, then, is clear — someone tried following the doctor’s sterilization advice, and this particular depicted microwave explosion was the end result.

Note that Hildreth — a public health official giving pandemic preparedness advice as a doctor — told Tennesseans to microwave cloth masks if they had no metal staples. “Don’t microwave metal” is a fairly well-known axiom among people whose houses have kitchens, but just to be on the safe side, Hildreth included it in his concise advisory.

So why did Facebook mark the post “true”? Did the image actually show a kitchen ravaged by a microwaved mask?

The answer to that question is no. The image dates back to 2015 (nearly five years before the novel coronavirus even existed): 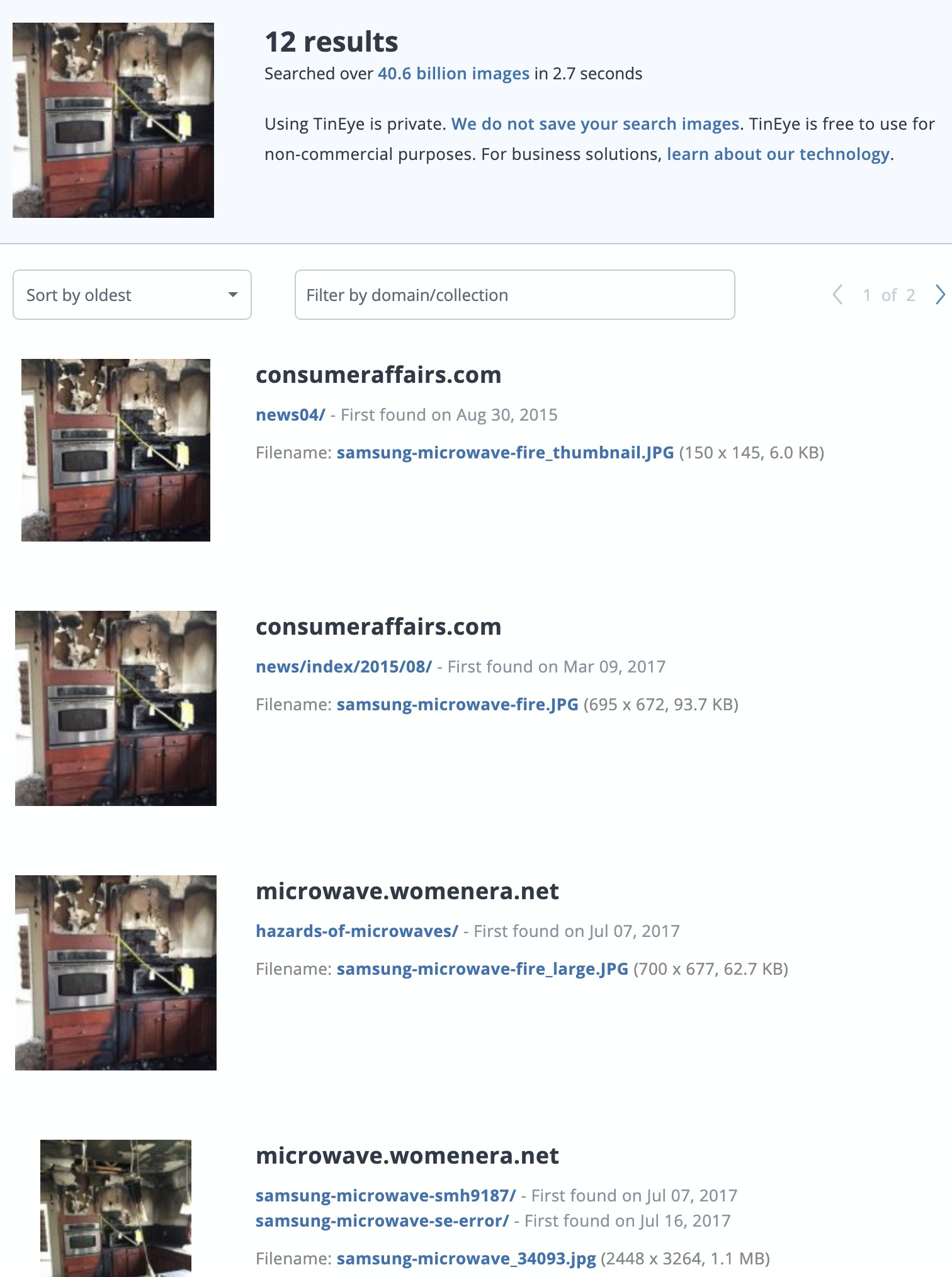 Okay, so the image was five years old — surely it shows some sort of mask-related issue? Also no. In August 2015, Consumer Affairs’ “Microwaves: a fire hazard in your kitchen” reported:

Microwave ovens can do a lot of things — pop popcorn, heat frozen burritos and warm up leftovers. … One of the latest complaints comes from Channelle, who reports that her Samsung microwave caught fire when no one was home, causing major damage to her kitchen.

“I had contacted Samsung about five weeks prior letting them know that the microwave was starting on its own whenever you would open the door to put something inside of it,” Channelle said. “However their customer service agent advised that since I had not purchased an extended warranty, there was nothing they could do unless I purchased their almost $400, extended warranty.” Two days before the fire, Channelle said the microwave started, coming on by itself even when no one was nearby. “It would also spark a little as if there was foil or something inside of it,” she said.

It’s true the microwave’s owner — referenced only as “Channelle” — described her Samsung microwave as behaving as if “there was foil or something” in it. However, Channelle went on to explain that the fire wasn’t because anyone put anything in it — it happened when no one was at home, which means no one was microwaving a mask or anything else.

Hildreth, the CEO who recommended microwaving cloth masks for sanitization purposes, surely drew on his knowledge of infectious disease and personal protective equipment to formulate the advice that people using cloth masks microwave those masks to sterilize them. People might only have one or two masks made of cloth and no washing machine, which means they would be unable to toss their cloth masks in the wash to sterilize them.

Hildreth also was cautious to first say to check the mask for metal, and also provided instructions on how to safely microwave cloth masks — providing the recommendation as an accessible way to ensure PPE was not itself a vector of COVID-19.

Guidance from the CDC last updated on April 9 2020, titled “Decontamination and Reuse of Filtering Facepiece Respirators,” began by stating:

Based on the limited research available, ultraviolet germicidal irradiation, vaporous hydrogen peroxide, and moist heat showed the most promise as potential methods to decontaminate FFRs. This document summarizes research about decontamination of FFRs before reuse.

That guidance did not mention “cloth” at all; “fabric” was mentioned only it its bibliography. Separate guidance on the use of cloth face masks aimed at the public (not medical professionals) did not discourage the use of microwaves, but said:

How does one safely sterilize/clean a cloth face covering?
A washing machine should suffice in properly washing a face covering.

According to Census numbers dating back to 2011 [PDF], about 85 percent of American households had access to a washing machine. However, New York City was the hardest-hit epicenter of COVID-19 in the United States — and few of even the most upscale buildings or apartments offered non-community washing machines.

Residents of cities and of impoverished suburban and rural areas often lack their own washing machines and rely on laundromats, which means many people often have to do their laundry once weekly or twice monthly. That leaves a significant number of people both without access to a washing machine between mask uses and without a way to sterilize their cloth masks.

In short, an image attached to a Facebook post warning people not to microwave masks was stolen from a 2015 article about a microwave exploding when the home’s residents were not at their house — in other words, spontaneously. It had nothing to do with microwaving masks. The Centers for Disease Control and Prevention said washing machines “should suffice,” but did not specifically advise against using microwaves. As for the number of New York City residents with cloth masks and no washing machines in a location leveled by COVID-19, washing machines were not always an available option.

As such, Hildreth’s advice — likely given with patient circumstances in mind — was again relevant. As long as a mask does not have metal, microwaving it was validated by the CDC (moist heat) and is a simple remaining option to avoid self-infecting with contaminated PPE.