Education Secretary Betsy DeVos said "only .02 percent" of schoolchildren would die if schools opened for the 2020-2021 school year, a figure of nearly 15,000 American children.

On July 11 2020, the following tweet claimed that the United States Secretary of Education Betsy DeVos — in the course of arguing in favor of reopening schools during the COVID-19 pandemic — asserted that “only 0.02 percent” of American schoolchildren would die, a percentage that represented the deaths of approximately 14,740 children:

According to the posts, DeVos made the statement on Saturday, July 11 2020. However, we had initial difficulty locating any indication DeVos made such a statement, other than copies of the tweet with similar or identical wording.

On July 12 2020, DeVos appeared on Fox News and did, in fact, claim that reopening schools poses little risk — despite all evidence to the contrary:

The top U.S. education official downplayed the risk of reopening schools in the fall, a high priority of President Trump, and repeated a threat to cut funding to schools that don’t fully resume in-person learning as educators wrestle with the risk of the coronavirus.

Education Secretary Betsy DeVos said on “Fox News Sunday” that “nothing in the data” suggests children being in school is “in any way dangerous” — an assertion challenged by a top public health official on the same program.

“Parents are expecting that this fall their kids are going to have a full-time experience with their learning, and we need to follow through on that promise,” DeVos added.

DeVos’ comments come as U.S. education policy regarding the COVID-19 pandemic has moved to the forefront.

DeVos also floated the idea of withdrawing funding from schools if they didn’t reopen:

“If schools aren’t going to open they shouldn’t get the funds … Give it to the families.”

DeVos reiterated her message on cable news and Twitter:

Pleased to host @VP and the @WhiteHouse Coronavirus Task Force at @usedgov today for continued conversation about the need to reopen America’s schools. It is not a matter of IF but HOW. All students need to continue learning this fall. pic.twitter.com/RyF4Zt3YOy

Still, tracking down the specific, chilling claim that “only .02 percent” of American school children would die of COVID-19 if schools opened remained difficult.

The most prominent version of the claim we located was the first tweet embedded above, and it did not include a citation or any other reference. However, that person said that they did not write the tweet:

I did not type this tweet so I’m clarifying it’s comments. During a White House meeting about opening schools held by DeVos Pence the CDC and Dr. Birx the doctor made the 0.02% death comment of children. No change for me as @BetsyDeVosED is pushing to open schools.

I did not type this tweet so I’m clarifying it’s comments. During a White House meeting about opening schools held by DeVos Pence the CDC and Dr. Birx the doctor made the 0.02% death comment of children. No change for me as @BetsyDeVosED is pushing to open schools.

In a subsequent reply, the user said that they obtained their initial information from an unlinked Reddit thread, and added:

Update: I don’t hide from errors. Originally the Reddit post showed the value at 0.02%. It’s actually 0.1% a much higher value. The text from YouTube and video are below. https://t.co/QqE0iftrWF pic.twitter.com/njFtU4PNU7

The second tweet linked to a rough citation — but the speaker was Dr. Deborah Birx, not Betsy DeVos.

The citation linked in the above tweet was a very short July 12 2020 video of Dr. Deborah Birx speaking:

A description for the video read:

So over 100 thousand children’s and young adults’ deaths would occur were covid allowed to rampage through schools and universities. UNACCEPTABLE

In the clip, Birx gathered her papers, and someone off-camera asked if Birx wished to address “the risk to children.” Birx then returned to the podium and said:

Oh … I think the Vice President covered that incredibly well. We know the mortality rate in [those] under 25 from the CDC data is less than .1 percent and so that has been holding, but until we know how many have been infected we have no evidence that there is significant mortality in children without co-existing diseases … and that’s what we’re looking for right now is to really make sure we’ve … under … overturned every rock and understand that in deep detail.

Birx didn’t say that “only .02 percent” of schoolchildren were expected to die of COVID-19 during the 2020-2021 school year. It seemed likely Birx was referring to the Centers for Disease Control and Prevention’s July 8 2020 “Weekly Updates by Select Demographic and Geographic Characteristics,” which we have archived here. A chart showed deaths by age group, with the first and lowest as Americans under the age of 25: 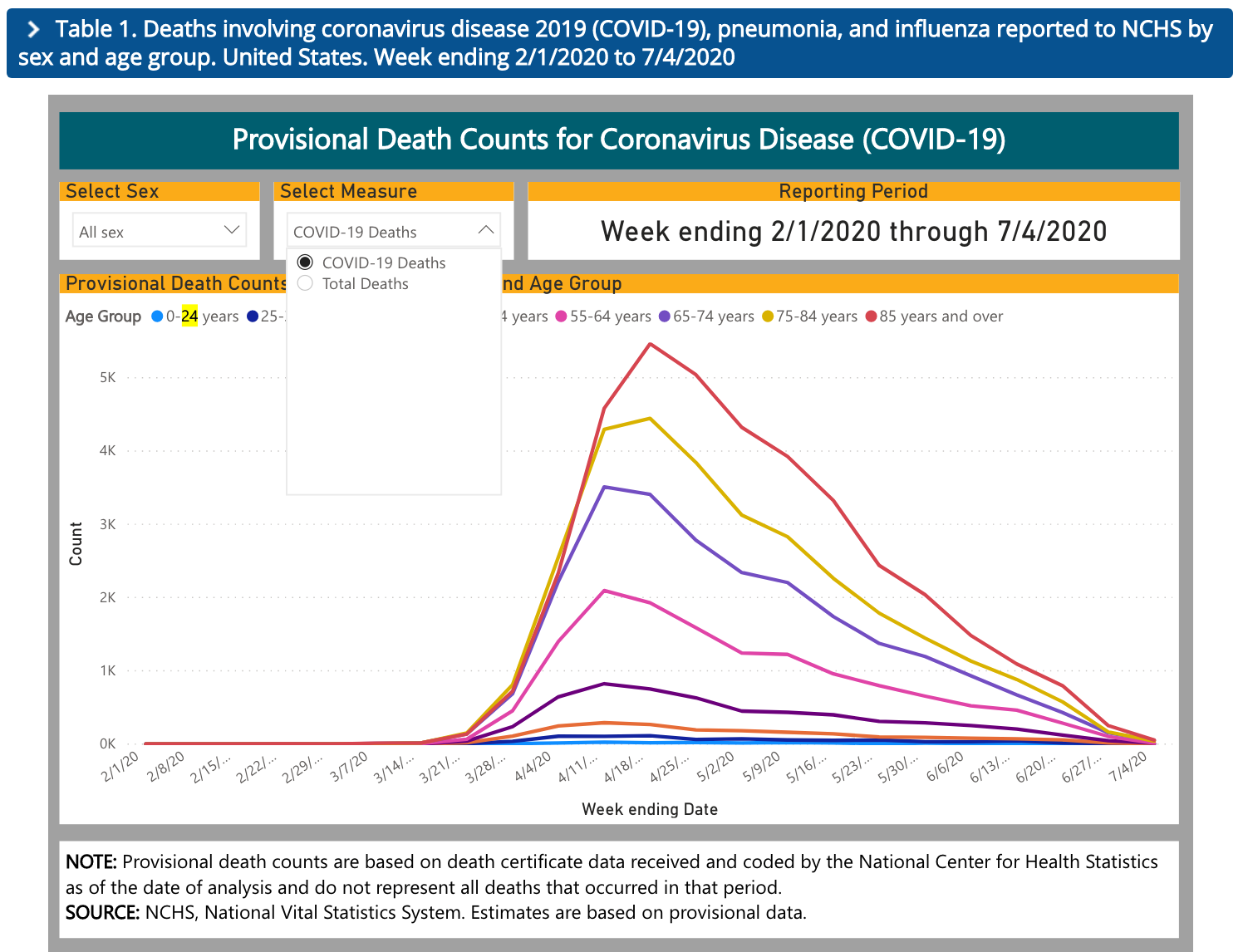 Birx made her comments during the course of a July 8 2020 White House Task Force briefing. NBC News reported:

But there’s not enough data to arrive at that conclusion, White House health advisor Dr. Deborah Birx said later in the briefing on [July 8 2020]. She said U.S. data is incomplete, because the country has not been testing enough children to conclude how widespread the virus is among people younger than 18 and whether they are spreading the virus to others.

“I think it really comes to the evidence base of what do we have as far as testing in children,” Birx said [on July 8 2020], addressing a question about whether kids spread the virus. “So if you look across all of the tests that we’ve done, and when we have the age, the portion that has been the lowest tested portion is the under-10-year-olds.”

In the second of two replies embedded above, the Twitter user mentioned seeing the information on Reddit.

That post did not claim that DeVos or Birx made the “only .02 percent of kids will die” comment in summarizing a briefing involving DeVos, Birx, and Mike Pence:

Betsy Devos said she really really really wants kids back in school. She does not know how to do this, offered no suggestions. Just that they need to open, and leaves it up to local officials to figure it out.

Vice President Pence said children are resilient. Basically made out of cartilage with healthy lungs. They probably won’t get sick, so we shouldn’t worry about them. There is also no disagreement between the CDC and Trump. Trump wants schools to open, and just doesn’t want the CDC’s guidelines to be the reason for schools not opening?

Yes, he actually said he doesn’t want states to keep their schools closed just because their own CDC says it is not safe to open.

So the VP says, don’t worry, let’s bring up the Director of the CDC to clarify. -And I could‘ve sworn I heard this guy gulp off camera.

But the director of the CDC comes up and says he also wants schools to open safely. He said he likes his job and wants to keep it, therefore, he is also in full agreement with Trump, despite the guidelines they released hours before.

So then Dr. Birx comes on and says half the country has seen a surge of new cases. The country is worse off than it was back at the start of all this. She said they should return to phase 1 and start all over.

Now, an astute reader may wonder how do half the states return to phase 1, and still expect to open by fall? Good question. ….. And while you were thinking about it, Birx tries to leave the podium.

But before she gets away, Pence stops her, suggests she ‘talk about that other thing about the children’. She hesitates, then agrees.

She comes back up to the mic, says most children probably won’t die. Maybe 0.1%. And usually the ones who die were already sick, so you parents at home may want to keep an eye on them. Oh- and we have virtually no data on how transmissible the virus is in children because we’ve barely tested any of them, but let me get out of your hair.

You all realize when Dr. Brix [sic]says only .02% of students will die she talking about over 11 thousand children are going to die, right??

But hey no biggy, they won’t be any of our politicians kids so who gives a rat’s ass??

The quote itself was misattributed and out of context, although the message about reopening schools was accurate. So how about that figure?

How many students will attend school in fall 2019?

About 56.6 million students will attend elementary, middle, and high schools across the United States (source).

The claim Betsy DeVos said “only .02 percent” of American schoolkids would die should schools open across the United States for the 2020-2021 year was — at best — misattributed, as the actual figure (.1 percent) was provided reluctantly by Birx during a short but vague comment made at Pence’s behest during a July 2020 briefing. It was definitely true that DeVos adamantly expressed her belief schools ought to open with little restriction, and that her beliefs were at odds with public health experts’ recommendations. But she did not say that “only .02 percent” (or “only .1 percent”) of students would die; that comment appeared to be the product of a game of social media telephone.