It was not the first misleading or poorly contexted blog about polling we have examined, and it began as follows:

President Biden’s approval rating has fallen to 33% in a left-leaning mainstream poll released on [January 12 2022] as his administration has overseen the inflation crisis, the disastrous withdrawal from Afghanistan, and the worsening COVID-19 pandemic.

That site linked to a January 12 2022 press release from pollster Quinnipiac, “Political Instability Not U.S. Adversaries, Seen As Bigger Threat, Quinnipiac University National Poll Finds; Nearly 6 In 10 Think Nation’s Democracy Is In Danger Of Collapse.” Biden’s approval ratings were not mentioned in the title.

JoePags.com described Quinnipiac as a “left leaning” polling outfit; FiveThirtyEight.com’s pollster rating for Quinnipiac can be found here. Quinnipiac summarized portions of the poll in sections, one of which was titled “BIDEN JOB APPROVALS”:

Among Democrats in today’s poll, 75 percent approve, 14 percent disapprove and 11 percent did not offer an opinion.

Among Democrats in November’s poll, 87 percent approved, 7 percent disapproved and 6 percent did not offer an opinion.

Among registered voters in today’s poll, Biden receives a negative 35 – 54 percent job approval rating with 11 percent not offering an opinion.

In November, registered voters gave him a negative 38 – 53 percent job approval rating with 9 percent not offering an opinion.

Among adults, Americans give negative scores on the following three issues when asked about Biden’s handling of…

After the summary, Quinnipiac included answer breakdowns by party affiliation and demographic: 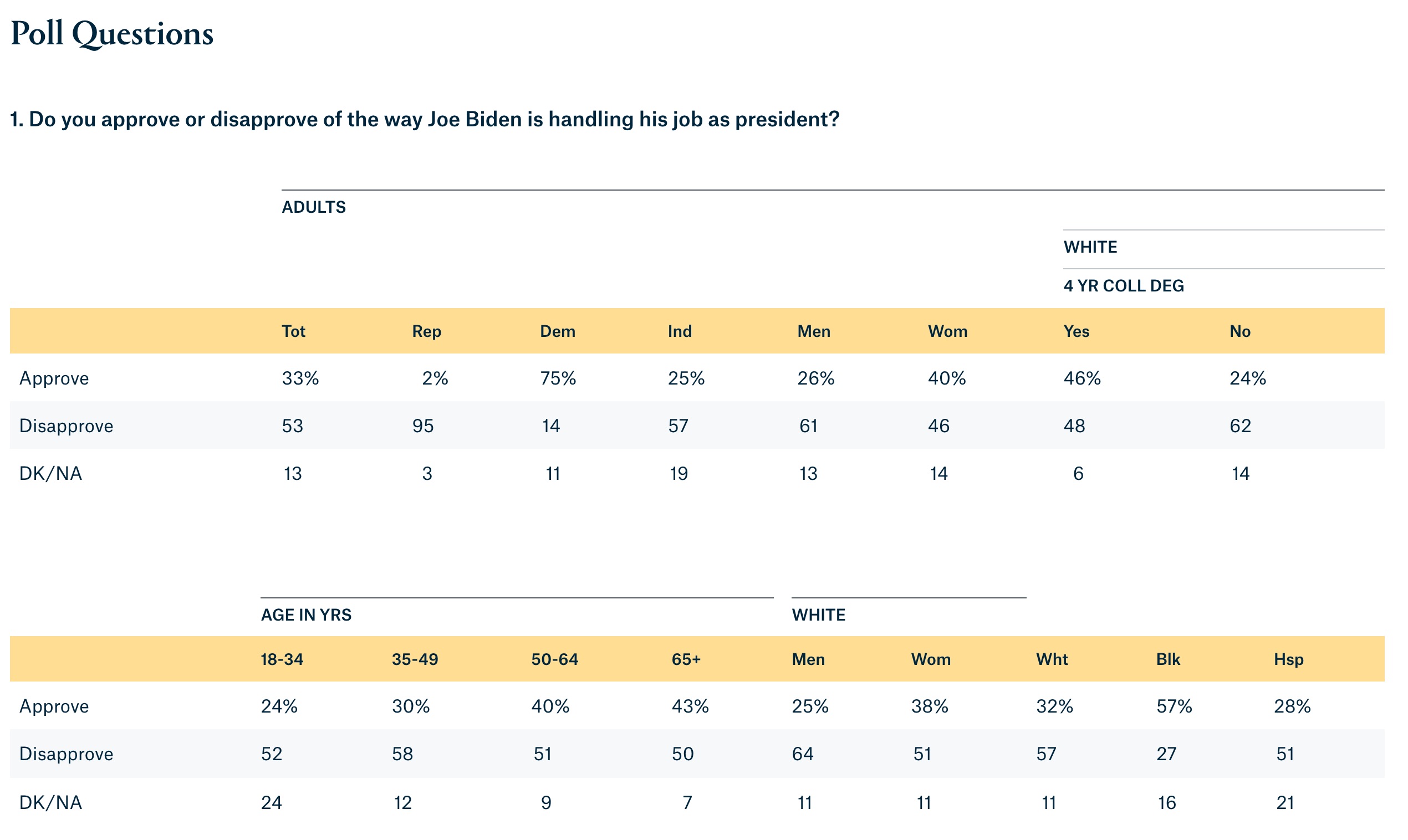 In a follow-up question, those polled were asked to clarify if they “strongly or somewhat approve/disapprove” of Biden’s performance:

Partisan trends in the crosstabs did not go unnoticed in discourse about the Quinnipiac poll. Legal analyst Joyce Vance tweeted:

Is @QuinnipiacPoll an outlier or the leading edge?

* Reuters/Ipsos measures “all adults” not just registered voters; Quinnipiac is 33% in that category.

Gallup approval ratings at roughly similar points in their presidencies.

In a date range between January 6 and 12 2022, FiveThirtyEight.com aggregated the results of polling by five pollsters: Rasmussen Reports, Morning Consult, YouGov, Decision Desk HQ, and Quinnipiac University. Biden’s highest approval rating on the chart was from Decision Desk HQ at 47 percent; his lowest was Quinnipiac at 33 percent.

At the top of the page, the title alternated between “How popular is …” and “How unpopular is …” Joe Biden. The longer range indicated that Biden’s popularity dipped on or around August 24 2021, and remained relatively flat after that: 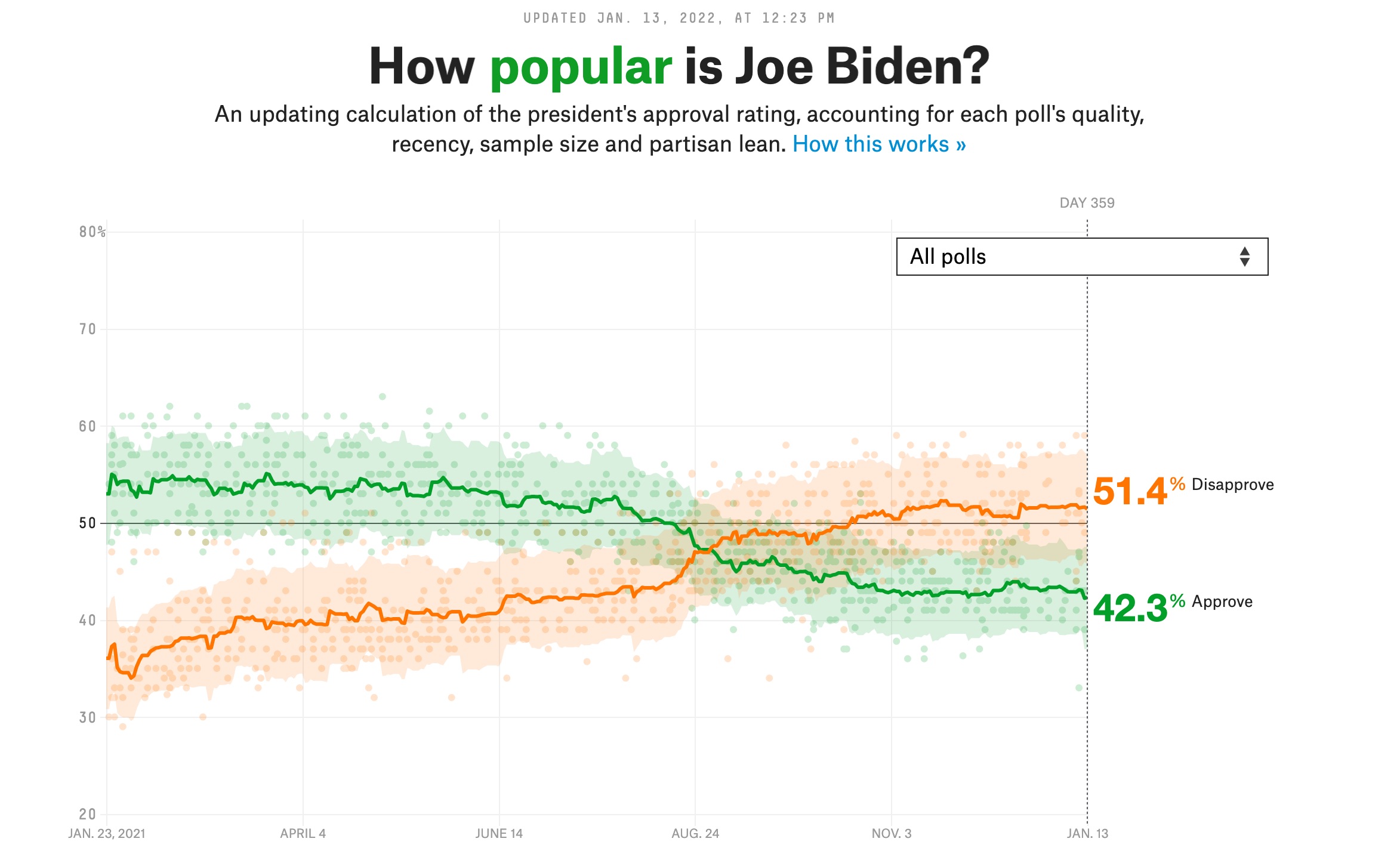 Finally, the JoePags.com item didn’t include the first few paragraphs of the Quinnipiac poll press release, where context for the figures which followed appeared:

Democrats say 83 – 13 percent, independents say 78 – 19 percent, and Republicans say 66 – 29 percent that political instability in the U.S. is the bigger danger.

A majority of Americans, 58 – 37 percent, think the nation’s democracy is in danger of collapse.

Republicans say 62 – 36 percent, independents say 57 – 39 percent, and Democrats say 56 – 37 percent they think the nation’s democracy is in danger of collapse.

A virally popular blog post (“Biden’s Approval Rating Plummets To Nearly 30% In New Poll”) was published on January 12 2022, the same day Quinnipiac University published their latest poll. Of the five polls FiveThirtyEight.com listed on their Biden approval ratings page, Quinnipiac had the lowest approval numbers for polling in early January 2022. Biden’s popularity dipped in mid-August 2021 and stayed fairly flat from there, and the poll’s detailed figures revealed a sharp partisan divide. Moreover, Quinnipiac cited widespread fears of “political instability” and a democracy in “danger of collapse” as their poll’s largest takeaway.