Comedian Dave Chappelle said, "If you stopped listening to Michael Jackson because of an HBO documentary, I have some bad news for you about the Catholic Church."

The March 2019 wide release of documentary Leaving Neverland prompted a flurry of social media activity, among the posts was a meme purportedly quoting comedian Dave Chappelle about reaction to the documentary, Michael Jackson, and the Catholic Church: 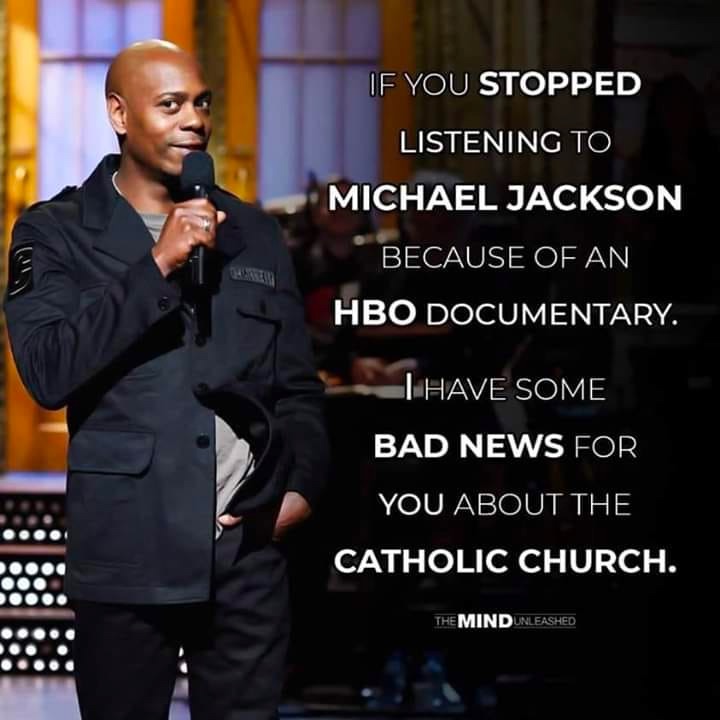 Originally published via Facebook by “The Mind Unleashed” on March 11 2019 (archived here), the meme’s text was watermarked by the page and read:

IF YOU STOPPED LISTENING TO MICHAEL JACKSON BECAUSE OF AN HBO DOCUMENTARY.

I HAVE SOME BAD NEWS FOR YOU ABOUT THE CATHOLIC CHURCH.

The meme stopped short of explicitly attributing the quote to Chappelle, but the inclusion of his image implied that he first said this, and led to subsequent attributions in transcribed versions of the meme. An IMDb quotations section featured a rough transcription of Chappelle’s 2004 bit about Jackson, which did not involve the Catholic Church or the 2019 documentary at all:

But so far from what I’ve heard, I mean the kid said he was dying of cancer, he was in Make-A-Wish Foundation, he claims he had two weeks to live, and it was his dying wish to meet Michael Jackson. Come on, Man. Give me a fucking break. This kid is 10-years-old, he don’t remember “Thriller”. The fuck you want to meet Michael Jackson for, honestly? I remember “Thriller” and I just kinda wanted to meet this *****. Like, I wouldn’t break an appointment to meet him, I’ll put it that way. I’d have to already be free. That’s ridiculous, that’d be like if I’m dying in two weeks and go “Oh, mama, get me in a room with Chubby Checker.” I wouldn’t wanna meet that motherfucker. Not in my last two weeks. why not Usher, or somebody like this.

So then the kid claims he goes to Michael’s house – this is where it all gets crazy – I don’t… like, you know, he does everything you’d expect at Michael’s house, they climb trees, and rode roller coasters and Ferris wheels, the chef made cookies, pies, and cakes, they was petting a monkey and giraffes, sing songs: kid shit. And in the middle of all this child like activity, for some reason, Mike pulled out some wine and some pills and sucked this kid’s dick – folks it hurts me to say it – and the kid had the nerve to call that abuse. Motherfucker, that is a good host.

Goddamn, what else do you want? What else do you want? I’m lucky to get a glass of grape drink at my friend’s house, let alone a roller coaster ride and my dick sucked. Mike must be confused, like “I brought you in my house, I fed you, I sucked your dick, and this is how you repay me, motherfucker? This was your wish not mine. I thought you were dying in two weeks, what happened to that motherfucker? I’ve been in court for a year and a half, you get stronger every time I see you.”

Three days later on Reddit, an older Chappelle routine about Jackson was shared to r/videos. However, the bit did not include any reference to the Catholic Church, and it was performed more than a decade before the release of Leaving Neverland. The only news reference to Chappelle in relation to the documentary’s release was a retread of material from Chappelle’s Show in or around 2004.

It remains  possible (but unlikely) that Dave Chappelle did contrast reaction to Michael Jackson’s legacy after Leaving Neverland with reaction to ongoing child sex abuse scandals involving the Catholic Church. While the original meme and its copies neared six-figure share counts, we found no documentary material suggesting the quote was correctly attributed to Chappelle.