Image depicts a four-mile fence erected around the Democratic National Convention (DNC) in 2016.

On December 28, 2018, a Facebook user commented on a debate over border wall funding by sharing a photograph of a purported four-mile long fence erected around the Democratic National Convention (DNC): 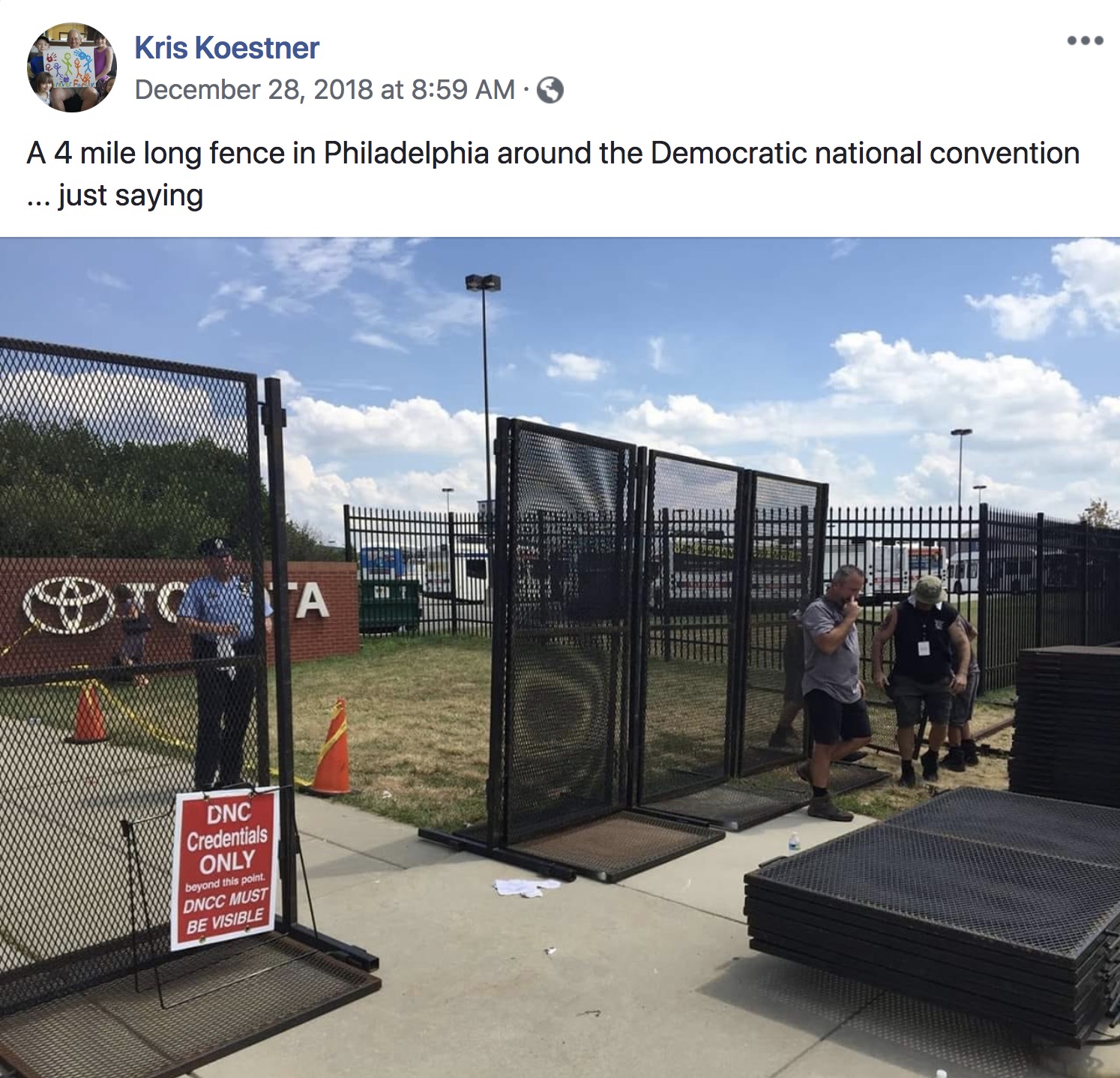 The photograph appeared to be clear and unaltered, but it did not appear alongside any articles or links substantiating its purported backstory. Nevertheless, the commentary proved popular, and the post was shared more than 100,000 times in a week.

A reverse image search revealed that the photograph first popped up around the internet in the summer of 2016, concurrent with the Democratic National Convention. Several threads on Reddit featured the image, but its earliest appearance seemed to be a July 28, 2016 article published by the Observer, “We’ll Build a Wall and We’ll Get Philadelphia to Pay for It”:

Much has been made of the gigantic four-mile wall that the security people have built to shield DNC attendees from the robust protests taking place throughout Philadelphia. Even People magazine noted that high-profile supporters of Bernie Sanders cannot get anywhere near the delegates they’re hoping to influence and several have been arrested trying to scale the 8-foot fence that rings not just the stadium proper, but a giant area outside the stadium.

According to the US Secret Service, it was a nearly unprecedented effort to shield convention-goers from the riffraff. Special Agent James Henry told NBC10.com that it would include “no-scale fencing to enclose the Wells Fargo Center and Xfinity Live!”

What may look like a boring story about securing an area during a naturally contentious event is of course irresistible because of the irony of the Democrats, who have made sport of Donald Trump’s focus on building a wall on America’s southern border, being protected by a wall surrounding their convention.

That piece linked to a report from a local NBC affiliate about the DNC’s security perimeter:

Security at the Sports Complex during the Democratic National Convention next month will include “no-scale fencing” to enclose the Wells Fargo Center and Xfinity Live!, the Secret Service special agent in charge said in an interview Thursday.

“It’s still in a little bit of flux,” he said. “Not unlike the papal visit, the perimeter was in a state of flux for, really, up until a couple weeks, if not even closer, to the event, before it was firmed up.”

Although the image first appeared prior to the election of then-candidate Donald Trump, the security fence still elicited claims of hypocrisy considering the candidates’ differing platforms. Before the convention, the fence was dubbed a “Bernie barrier,” and PennLive.com reported:

A four-mile long, eight-foot high metal fence is still standing after a weeklong pummeling by DNC protesters, occasional breaches and months of controversy surrounding its existence.

“This was put up expressly to keep us from having access and so they can’t hear us,” Katie Troutman, a recently de-registered Democrat from Orange County, Calif., said during a protest at the fence on Wednesday.

“It was also put up to keep everything isolated and sanitized [inside the Democratic National Convention hall].”

Since its inception, the fence has proven a source of contention between government officials and the activists who spent months planning the protests that descended on the area all week.

The activists continue to feel the wall was positioned too far from the Wells Fargo Center arena, and that it negated their First Amendment rights by restricting their ability to be heard and seen by the very party leaders and Clinton delegates they had come to address and protest against.

The image is real, and its description is accurate — a very large, metal wall, fence, or barrier was indeed erected outside the Democratic National Convention (DNC), presumably with the purpose of keeping people out of the event. Whether that point stands when applied to a wall separating two sovereign nations or if that is simple whataboutism, however, remains a matter of debate.