The most brilliant scientists working for the United States government refuse to vaccinate their children.

On January 7, 2019, the Facebook page for NaturalNews.com shared a video, the premise for which was contained in its title: “The most brilliant scientists working for the U.S. government do NOT vaccinate their own kids.”

The same video was shared to Vimeo in October 2018:

The most brilliant scientists working for the U.S. government do NOT vaccinate their own kids from NaturalNews on Vimeo.

Although no citations for its claims were included, the description section featured lengthy pleas for donations. It bore a series of captions making myriad definitive claims, which read in sum:

In New Mexico, where many scientifically-literate families live, vaccines are being avoided like the plague

The mainstream media spreads vaccine propaganda, suppressing the science while urging everyone to get vaccinated, no questions asked

Learn more about the vaccine scam at NaturalNews.com

The clip was interspersed with images of scientists pointing to giant notepads, syringe close-ups, families, and children crying next to road work signs reading “vaccine checkpoint”: 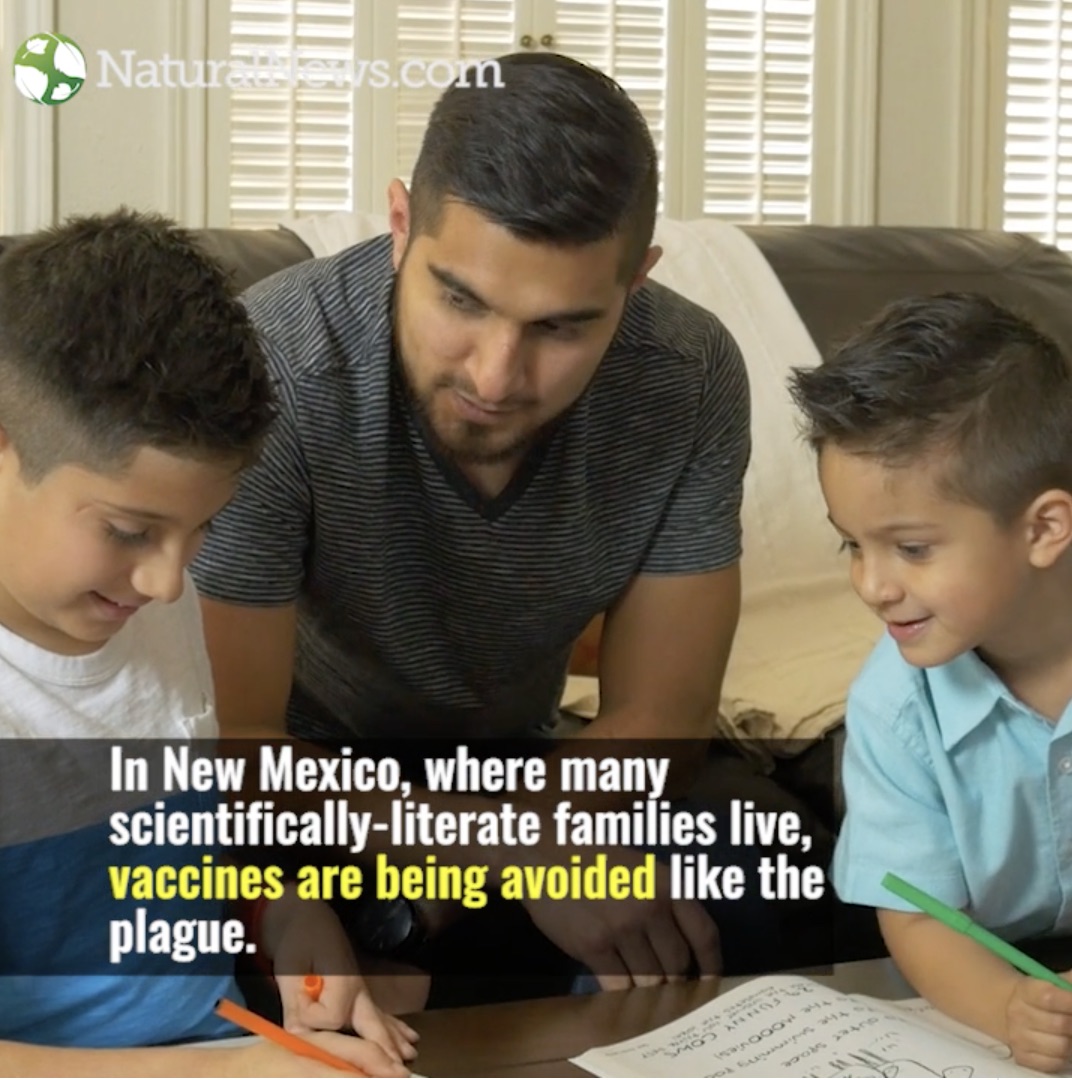 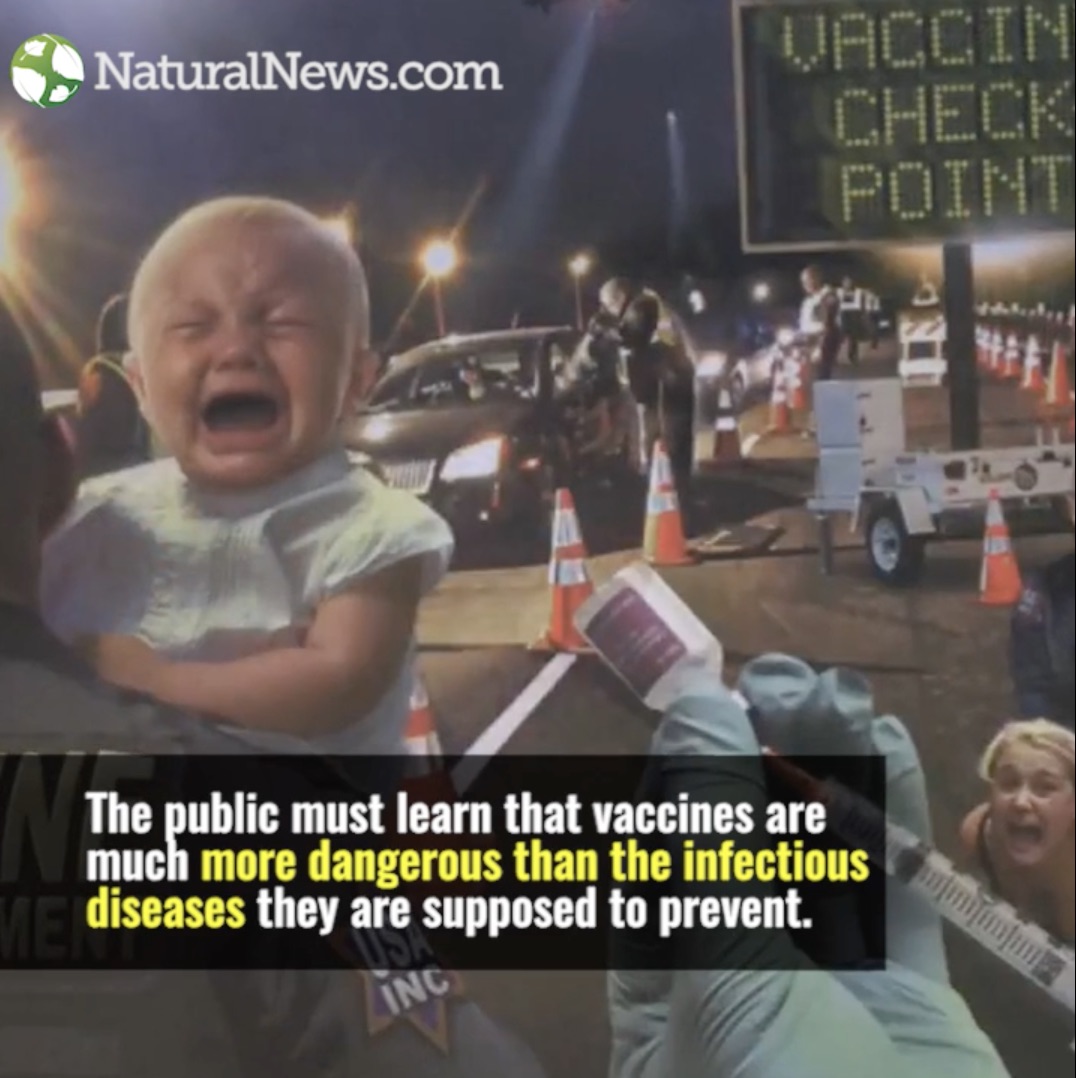 Neither the Facebook post nor the Vimeo video included a link to what appears to be the source material, an article published by NaturalNews.com in September 2018:

Welcome to Los Alamos, New Mexico, where our country’s most scientifically literate families are avoiding vaccines like the plague. Meanwhile, the infected “vaxxers” are all throwing poisoned fits, wondering why all the “sheeple” aren’t following the rest of the “herd” like they’ve been summoned to do by the script-fed mass media and the morally corrupted CDC. Could this phenomenon be gaining momentum because hundreds of parents in that New Mexico community are employed at Los Alamos Labs and the Los Alamos National Laboratory, where extensive research is done on vaccines?

Several top scientists in Santa Fe are keeping their kids from getting vaccinated and these statistics are among the highest in America. Obviously, the science of vaccines is not settled. In fact, the so-called “safety and efficacy” of vaccines is under intense scrutiny, especially as of late, given that the vaccine industry has paid out over $3 billion in damages to injured families, and because vaccines have been proven to spread disease more often than they prevent it. Ever heard of the massive polio outbreaks in India? We can all thank Bill Gates for that.

That in turn included a link to a blog called ReportingTheTruth.com, which mentioned the purported scientific resistance to vaccines in Los Alamos in a June 2018 post. This site appeared to be NaturalNews.com’s sole reference for its claims.

However, NaturalNews.com appeared to have misread the blog. What ReportingTheTruth.com actually said was that 2.3 percent of students in Los Alamos were “forgoing traditional vaccine regimens” (not that their parents were declining to vaccinate them altogether), and that “many of the parents in the community work for US Los Alamos Labs … or one of the other scientific organizations” in the community:

How shocking is it that New Mexico, the school district with the highest percentage of students whose families are opting out of vaccines, is actually one of the state’s most scientifically literate communities?

Well, if you know how harmful vaccines really are, you might not really be all that surprised. But for many, the 2.3 percent of students forgoing traditional vaccine regimens in Los Alamos is causing quite the upset.

After all, many of the parents in the community work for US Los Alamos Labs, or one of the other scientific organizations that call the area home. For example, the Los Alamos National Laboratory has even conducted extensive research and development on a vaccine for HIV.

The Superintendent of the Los Alamos school systems has said that he finds the high rate of parents exempting their children from vaccination “curious,” given that it is a “pretty scientific and literate community.”

While the mainstream media continues to come up with all kinds of wild reasons for why “anti-vaxxers” don’t vaccinate their children, a community of scientists continues to abstain from the practice, much to the chagrin of pro-vaccine activists. Los Alamos is not alone; Santa Fe’s percentage of children not getting jabbed was just a few points behind, at 2.1 percent.

Nowhere in the blog post was it demonstrated that the extremely small number of children (2.3 percent) vaccinated on a delayed schedule or not at all had parents working in government labs, and it remains equally plausible that the children of parents who worked in scientific centers were in fact vaccinated. The post also did not link to any source claims relating to Los Alamos specifically, just anti-vaccine pages.

However, we located an article about Los Alamos’ superintendent and his comments on vaccine rates — from April 2015; that original article (titled “Los Alamos schools top NM in vaccine exemptions”) said something entirely different.

Elements of the reporting matched claims made and misrepresented in the two 2018 posts. Immediately, one major difference stood out — the article said some students had exemptions from having to receive vaccinations, not that their scientifically-minded parents had refused vaccines:

The tally is in, and the major New Mexico school district with the largest percentage of students opting out of vaccinations against contagious diseases is not in one of the state’s known hotbeds for crystal gazing, cradle therapy or psychic readings.

Nope, the highest percentage of vaccine exemptions is in New Mexico’s, and one of the world’s, science centers: Los Alamos.

According to a recent report by the state Department of Health, 2.3 percent of students in the Los Alamos Public Schools have exemptions from having to get vaccinations.

A video shared by NaturalNews.com’s Facebook page on January 8, 2019 claimed that top government scientists overwhelmingly refused to vaccinate their children. It took some digging, but we located the obscured source for that claim — an April 2015 Albuquerque Journal article about vaccination rates in Los Alamos being a few tenths of a percentage point different than neighboring towns.

Although that article mentioned the high number of employers in the field of scientific research in the community, it in no way made the claims NaturalNews.com claimed that it did about any correlation. Finally, CDC figures published the same month the video came out placed national vaccination rates at a not-hugely-different 1.3 percent.