U.S. President Donald Trump said he met generals at the Pentagon who were "better looking" and "stronger" than Tom Cruise.

On January 2, 2018, the Facebook page Union Thugs shared a meme attributing a quote about Pentagon generals and how they compared to actor Tom Cruise: 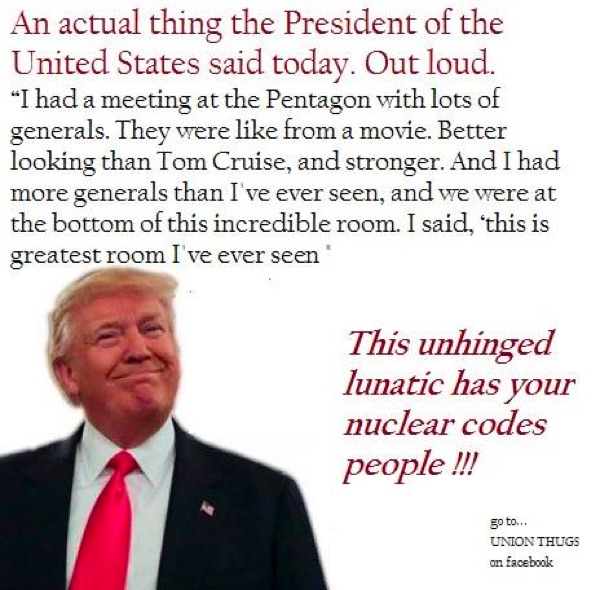 The quote was bookended with commentary from the meme’s maker. It read:

An actual thing the President of the United States said today. Out loud.

“I had a meeting at the Pentagon with lots of generals. They were like from a movie. Better looking than Tom Cruise, and stronger. And I had more generals than I’ve ever seen, and we were at the bottom of this incredible room. I said, ‘this is the greatest room I’ve ever seen.”

This unhinged lunatic has your nuclear codes people !!!

People on social media shared the quote tens of thousands of times, but some were skeptical that it was a legitimate transcript of something the President said. Neither the meme nor the post to which it was appended included any point of reference, such as a link to an article or video demonstrating that its claims were legitimate.

It didn’t take very long to determine the comment’s veracity. A New York Times article paraphrased the quote in its reporting:

Once Mr. Trump treated the military with a level of reverence that he extends to few other American institutions. Peppering his cabinet with retired senior officers enabled him to allay the concerns within the Republican Party about his own lack of experience and preparedness for the role of president. He has spoken admiringly of “my generals” and talked about those who looked the part.

“They were like from a movie,” he said on Wednesday [January 2 2018], describing a recent Pentagon briefing. “Better looking than Tom Cruise, and stronger.”

The Times lacked a quote matching the one on the meme, but a clip shared on Twitter on the same date by Vox journalist Aaron Rupar showed that the meme illustrated the quote mostly accurately:

TRUMP: “I had a meeting at the Pentagon with lots of generals. They were like from a movie. Better looking than Tom Cruise, & stronger. And I had more generals than I’ve ever seen, & we were at the bottom of this incredible room. I said, ‘this is greatest room I’ve ever seen.'” pic.twitter.com/fTpgDXVso8

It is true that President Trump said generals at the Pentagon were “like from a movie,” “better looking” and “stronger” than “Tom Cruise.”

One element of the meme to bear in mind was its use of the word “today,” which was correct on the day it was shared (January 2, 2018.) It was still being shared as new the following day and is now likely to spread in perpetuity, potentially subsequently mislabeling the commentary.