On January 1, 2019, British far-right activist Tommy Robinson (née Stephen Christopher Yaxley-Lennon) shared a post with photographs of an injured man, claiming that fifteen Muslim men had seriously assaulted a British serviceman one day prior in Batley:

Did a Woman on Facebook Mistake Drill Bits Discarded at a Gas Station for Bullets?

I have been informed by his family that this serving soldier was out celebrating the new year in Batley when he was overheard in conversation with his friend talking about his last tour. It is alleged that around 15 Muslim males took offence to him being a serving soldier, started intimidating him calling him scum. It escalated and he and his friend were set upon by 15 males. This young soldier tried to step away across the road to diffuse the situation. It is then alleged that one of the Muslim males got into his Mercedes and proceeded to mount the kerb and mow down the soldier at circa 50mph according to an eyewitness. The Soldier is in the intensive care at Leeds Hospital. According to individuals who were at the scene this was sparked over a conversation about him in the forces. If it is politically motivated due to him serving in the forces then should it not be treated as a terrorist attack? Ask yourself why this is not on any news channel?? My thoughts are with this young man’s family who have been in contact with me to inform me of the details and asked me to share. I hope he can recover from what would appear to be potentially another politically motivated attack. a go fund me page has been set up for the soldier 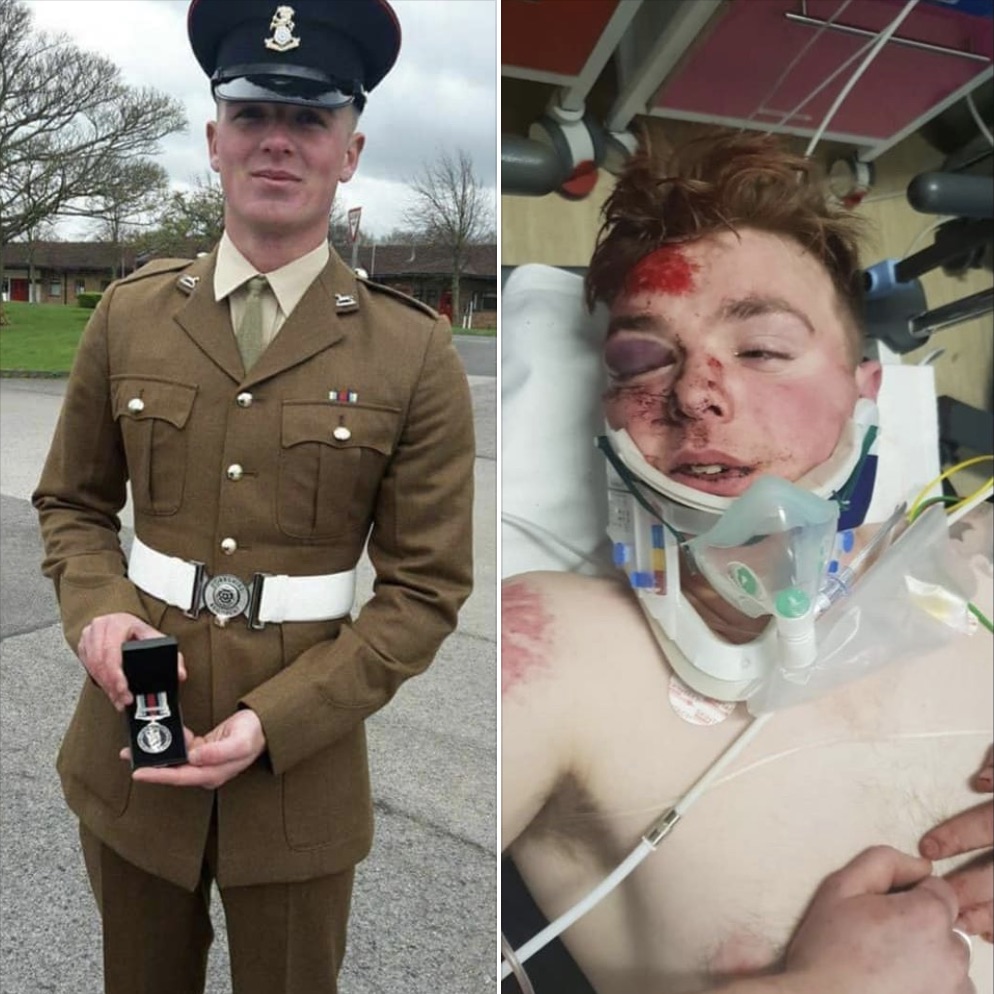 According to Robinson, 15 Muslim men assaulted the unnamed soldier — an incident he surmised should be treated “as a terrorist attack.” Robinson included a link to a GoFundMe campaign of unknown origin, as well as a link to a statement from West Yorkshire police — which bears almost no resemblance at all to the claims in his post.

The page displayed a brief original statement shared on January 1, 2019, and a longer one added the following day. The latter appeared to make reference to the social media rumor Robinson was spreading:

Police have arrested a man as part of their investigation in to an incident outside TBC nightclub in Batley.

The incident happened around 4:41am on New Year’s Day outside the TBC nightclub on Bradford Road, close to the junction with Hick Lane.

There was an altercation inside the club with a group of males which then proceeded outside the premises.

A 21-year-old male was then knocked down by a blue Mercedes and seriously injured.

This incident is being treated as a serious assault.

The blue Mercedes fled the scene but was later recovered by police.

Police can confirm that the 21-year-old male victim in this matter is a serving member of HM Forces.

The victim is in a serious but stable and conscious state, talking to family at his bedside and when he is ready the police will be speaking to him.

The full circumstances leading to the point at which the victim was struck by the vehicle are under investigation.

A 27-year-old man from Dewsbury has been arrested on suspicion on section 18 wounding with intent.

Chief Inspector Ben Ryder, said: “We would like to reassure service personnel that police have no evidence that the victim has been targeted due to his service in the army, or that it is motivated by racism.

“We remain open-minded and would urge anyone who witnessed the incident or has any further information to come forward to assist with our investigation.”

British tabloids exacerbated the spread of the disinformation, reiterating the social media rumors Robinson spread — but without mentioning their dubious source:

Joshua Adams-Mitchell is understood to have suffered damage to one lung, facial fractures and possible nerve damage to a leg which has left him unable to walk.

A GoFundMe page set up for his family originally speculated a group of “circa 15 Muslim males took offence to him being a soldier” ahead of the attack.

A number of regional UK outlets published reports on the initial altercation, almost exclusively reiterating the details in the police press release linked above. However, a local news site interviewed the owner of the nightclub, who reviewed hours of CCTV footage after the incident.

Owner Nick Westwell said that the driver of the Mercedes was not in the club at any point that evening, and that the incident involving the car was unrelated to anything that occurred inside the venue:

“The CCTV is clear. The individual driving the vehicle was not at any time in our venue … There was no altercation inside or outside that had anything to do with that vehicle, the driver or the individual (that was injured).

“The injured man left of his own accord. It was a road traffic accident and nothing to do with us.”

[Westwell] said he had spent the day with police watching CCTV and trying to help with their enquiries.

He said his door staff were first on the scene helping the injured man.

An earlier article from the same source reported that the victim “was knocked down after a fight inside the club spilled out onto the street,” which was in line with Westwell’s statement. Police questioned an unnamed 27-year-old man in connection with the incident, but did not say that that individual was involved in the altercation or visited the nightclub.

We were unable to locate any report about the nightclub incident and Adams-Mitchell’s injuries that made the “fifteen Muslims” claim independent of or before Robinson’s Facebook post. Police quickly refuted his claims that the incident was motivated by the victim’s service or religion, despite having questioned and arrested an individual in connection with the hit-and-run.

It was true Adams-Mitchell was struck by a blue Mercedes outside a venue in Batley in the early hours of January 1, 2018, but the claim that “fifteen Muslims” were responsible for his injuries fell apart, even after police stepped in to point out that those claims had no merit.

Nevertheless, the story continued to spread on social media long after it was shown to be baseless and little more than an apparent attempt at hate-mongering.

There was a New Year’s Eve incident in which a man drove his Mercedes into crowds of people celebrating in Germany, leaving at least five injured:

Four people were injured in the western city of Bottrop and one person was injured in nearby Essen, while pedestrians managed to jump out of his path in two other attempted attacks in those cities, police said.

The victims included a 46-year-old woman, who suffered life-threatening injuries, and a child. Some of the victims were Syrian and Afghan citizens.

This incident went unremarked upon by Robinson, who founded the English Defence League in 2009, an anti-Muslim group that was notorious for spreading racist propaganda for years, including a documented history of opportunistically blaming traffic accidents on “jihadi attacks” without evidence:

In October of 2013, Robinson resigned as the group’s leader. The announcement shocked both his supporters and critics, not least because he claimed his decision was prompted by concerns about the “danger of far-right extremism”.

Robinson went on to launch Pegida UK, an anti-Islamic organisation hoping to attract a different class of far-right activist, but has since taken to popping up at the scene of terrorist attacks and traffic accidents to stir up racial tension.