"This is disturbing. Facebook removed the title of 'President' from Donald Trump and designated him as 'Political Candidate. Trump is still president and, no matter what happens, will remain so until Inauguration Day."

On November 13 2020, pundit Dinesh D’Souza asserted on Twitter that Facebook had “removed” the designation of “President” from Donald Trump’s verified Facebook page, downgrading him instead to a mere “political candidate,” and heavily implying some sort of plot or ruse by the social media platform:

This is disturbing. Facebook removed the title of “President” from Donald Trump and designated him as “Political Candidate.” Trump is still president and, no matter what happens, will remain so until Inauguration Day pic.twitter.com/XRnh0dUwZP

Along with a screenshot showing a blue checkmark next to “Donald J. Trump” on Facebook (and “Political Candidate” underneath), D’Souza wrote:

This is disturbing. Facebook removed the title of “President” from Donald Trump and designated him as “Political Candidate.” Trump is still president and, no matter what happens, will remain so until Inauguration Day[.]

D’Souza insinuated that the “disturbing” purported change occurred prematurely, as Trump would remain President until January 2021 regardless of the results of the November 2020 election.

D’Souza’s tweet was shared to thedonald.win, where users appeared to take the claim at face value.

Dinesh D’Souza on the 2020 Election’s Outcome

D’Souza’s position on the outcome of the election was also apparent based on then-recent tweets and retweets, including a November 13 2020 retweet concerning the events of Inauguration Day in January 2021:

. @kayleighmcenany: "These are real and anyone who cares about transparency and integrity of the system should want this to proceed to the discovery phase." https://t.co/sWE0gn7yMm

His tweet about Facebook purportedly having “removed” the title of “President” from Trump’s page and replacing it with “political candidate” appeared to be a continuation of D’Souza’s overall conviction that the election was in dispute.

First of all, Trump has at least two verified Facebook pages — one at @DonaldTrump, and one at @POTUS.

The one to which D’Souza referred was the former, @DonaldTrump. A search for “Donald J. Trump” returned posts bearing the label of “Political Candidate,” just as he said:

On the @POTUS account, Trump’s label was “Government Official,” not “Political Candidate”: 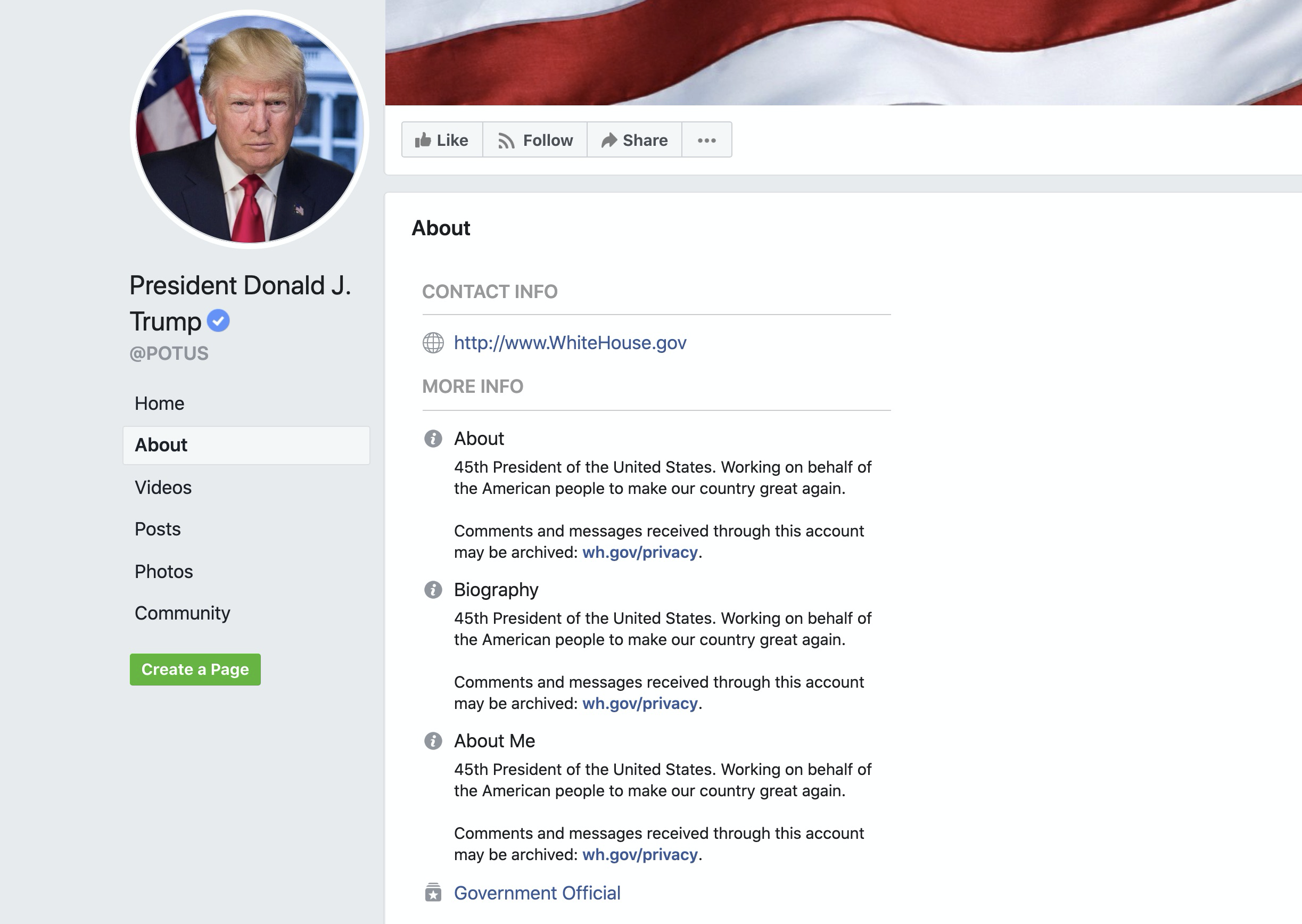 It appeared that “Government Official” was the label on Trump’s @POTUS page, while his other page was labeled “Political Candidate.” On the @DonaldTrump page, the President had 32,311,805 followers as of November 13 2020. On @POTUS, he had 6,452,953 followers.

It should be further noted that a prominent “About” section on the @DonaldTrump page — visible in the right-hand corner — bore title text reading “45th President of the United States”:

The easiest way to determine whether Facebook had “removed” the title of President from Trump’s page and/or downgraded him to “Political Candidate” following the November 2020 election was to find archived versions of the @DonaldTrump page through archiving services.

Archive.is maintains a large number of screen captures from Trump’s @DonaldTrump page, starting with June 19 2015. In February 2016, Trump was labeled as a “Public Figure”; in June 2016, Trump still maintained the “Public Figure” label.

Not all archived copies had a visible label, and some were saved in languages other than English. Between June 2016 and November 2016, we were not able to access an archive.is cached page with a visible label.

Trump’s page wasn’t archived again until May 2020 — when the label did change, from “Public Figure” to “Political Candidate.” The Wayback Machine (web.archive.org) maintained a far larger number of captures, typically more than five on any given day. Although their captures were consistent with archive.is’ versions, some were inaccessible due to our repeated loading of the same page, triggering a “security check.”

But in December 2019, an archived version clearly labeled Trump as a “Political Candidate.”

On November 13 2020, Dinesh D’Souza claimed that “Facebook removed the title of ‘President’ from Donald Trump and designated him as ‘Political Candidate.'” That claim was patently false, as myriad archived versions of the page in question showed that Trump was clearly labeled a “Public Figure” even after his November 2016 election and January 2017 inauguration. By late 2019, Facebook updated his category from “Public Figure” to “Political Candidate,” presumably as part of its efforts to categorize political activity and advertising on the platform. Facebook did not “remove” the title of President from his @DonaldTrump page; it had never been added in the first place.