August 2022 image accurately shows "the current state of the Loire, the longest river in France," which had purportedly "run dry."

On August 14 2022, a Facebook account shared a photograph and a status update about France’s Loire River, which had purportedly “run dry” or “dried out” amid intense heat waves and drought conditions in the summer of 2022; its text read:

This is the current state of the Loire, the longest river in France. This has not happened before in at least the 2000 years since literate people inhabited France. The Romans would have written about this. The medieval Franks would have written about this. To the best of our historical knowledge, nowhere in the past 2000 years has the Loire run dry, and likely never long before that. The drought that now grips southwestern Europe may well be unprecedented in recorded human history.

This is in the heart of wine country where grapes grow in abundance and wheat waves like golden seas- but not now. Now the wheat burns and the grapes whither to raisins on the vine. This is the end of days. And on Monday morning I’ll return to work and pretend this isn’t happening. It’s complete madness.

Neither the text nor the image had a source that was provided with the Facebook post. On August 11 2022, the post’s image was shared to Reddit’s r/Damnthatsinteresting, but the image became unavailable when the original poster (OP) deleted their submission.

That post linked to another version on Imgur, where the image was visible. It was originally posted on August 11 2022, and titled “The River Loire today, Loireauxence, Loire-Atlantique, France”: 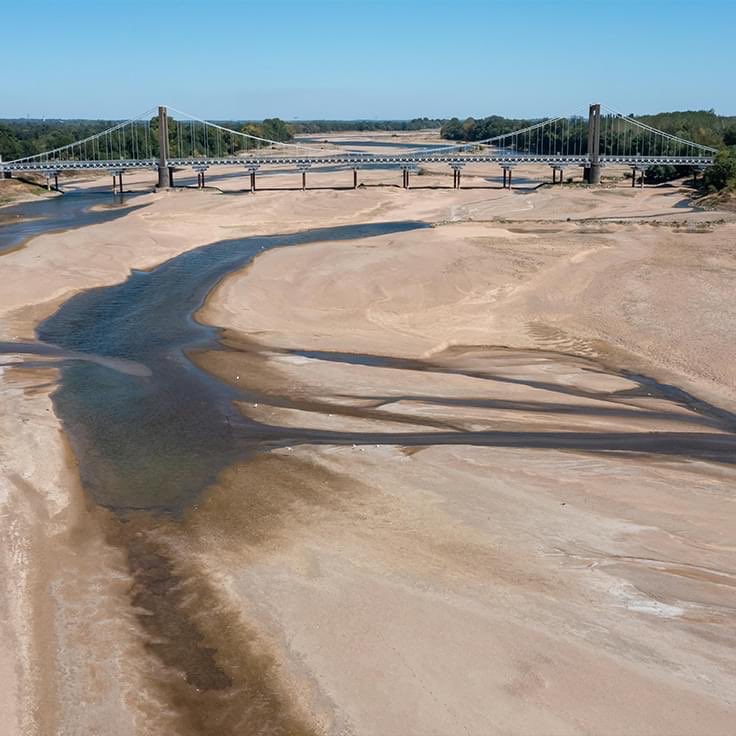 Pinned to the top of the r/Damnthatsinteresting thread was an explanatory comment from a moderator for that subreddit. It appeared to address discourse about whether the submission itself was misleading, and featured a subsequent edit about the purported location of the dry river in France (emphasis ours):

OP didn’t use the word “source” in their comments as they should have.

From their source [the BBC]:

Across two-thirds of France, a state of crisis has been declared by the government, with rainfall down by some 85%.

Some parts of the Loire river have virtually dried up completely.

And for those who don’t know, the Loire is the longest river in France:

Loire River, longest river in France, rising in the southern Massif Central and flowing north and west for 634 miles (1,020 km) to the Atlantic Ocean, which it enters south of the Bretagne (Brittany) peninsula.

This is not misinformation.

Edit: It has been reported that this is an image of a distributary of the Loire. This part is typically more shallow than the river; although it is drier than usual, this post title is misleading, and apparently the article above is as well. However, I have not been linked to any articles regarding this. Just comments and messages from users claiming to live in the area. Here is more information I found regarding the dryness of the Loire.

I have flaired the post as ‘misleading’. Thank you for helping me understand.

Edit 2: Be aware that reddit admins are monitoring this thread and removing calls for violence.

An initial source identified in the comments was a BBC article published on August 9 2022, “Loire Valley: Intense European heatwave parches France’s ‘garden.'” That article featured what appeared to be the same suspension bridge from a different angle (without a caption), and it reported in part:

Some parts of the Loire river have virtually dried up completely.

We stood in the middle of a section near the town of Saumur that is nothing more than sand banks and the odd puddle; locals say the water level has never been so low at this time of the year.

On the bank, beside a wall marked with lines showing how high the water levels would once reach, Clotilde Maneuvrier and her family were now picnicking instead, making the most of a new and worrying landscape.

The image shared to both Facebook and on the Reddit post did not appear in that article. Another linked source was TheLocal.fr’s August 11 2022 article, “IN PICTURES: French drought intensifies as River Loire dries up,” in which a tweet with the image was embedded:

That article noted that rivers in France had receded and “dried out” in some areas:

From the Loire to the Dordogne, rivers are slowing to a trickle – as [an] aerial video from French TV channel LCI shows.

“Aerial video” linked to an August 7 2022 tweet with footage of the Loire:

La Loire, this well-known French river with all the famous castles on its shores.

You can now walk across it.#drought22 #ClimateEmergency

Responses to both tweets (largely in French) quibbled about whether the image was misleading, or presented a portion of the Loire especially prone to dryness. French engineer and climate expert Thibault Laconde addressed the discussion, and Twitter provided translations to English for that thread:

Many photos of the #Loire , apparently dried up, are circulating at the moment and they are generating a lot of reactions and questions.

Do they really reflect the reality of the #sécheresse in progress?

The images taken as examples above were all taken by @DubrayFranck at the Varades bridge, halfway between Nantes and Angers.

It spans a shallow dead arm where the #eau often seems absent. Examples with these photos from May 2011 and August 2009 [images].

Later in the thread, Laconde explained:

The flow currently observed is therefore low but not excessively rare with regard to historical data. In fact, it corresponds almost exactly to the decadal low VCN3. That is to say, at #climat constant, we expect to reach it over 3 days on average every 10 years.

This does not mean that the situation is not worrying. On the one hand the #Loire generally reaches its lowest level of the year in September, which means that the flow will probably decrease further, perhaps to the level of historical #sécheresses like 1976 … On the other hand, if the current flow is not abnormal historically, it is compared to the last decades. Since 1976, the Loire has only fallen below 100m³/s in Montjean 3 times: 1991, 2019 and 2022. More than half of French people have never seen the #Loire at such a low level.

✅ Yes, we are facing a serious #sécheresse [drought]. The flow la #Loire is very reduced, on certain sections at its lowest level since 1976.

❌ No, the river is not dry. By showing a dead arm, these photos are at least a dramatization of the situation.

In August 2022, images of the Loire in France (described as having “run dry” or “dried up”) circulated across social media platforms — Facebook, Reddit, Imgur, and Twitter among them. Some French users claimed the image was “fake news,” or misleading at best. A detailed explanation provided by French engineer and climate expert Thibault Laconde acknowledged France was facing a serious drought and the Loire was at exceptionally low levels, adding that the Loire was not “dry,” and that the viral images depicted a “dead arm” and a “dramatization” of the Loire River’s August 2022 conditions.