"Reminder that 'pulling yourself up by your bootstraps' was initially a joke about an absurd, impossible thing to do, and that it is not a real thing one can do."

On August 19 2022, a Facebook page shared a screenshot of a tweet claiming that the origin of the popular American English phrase “pulling yourself up by your bootstraps” was the exact opposite of its modern usage: 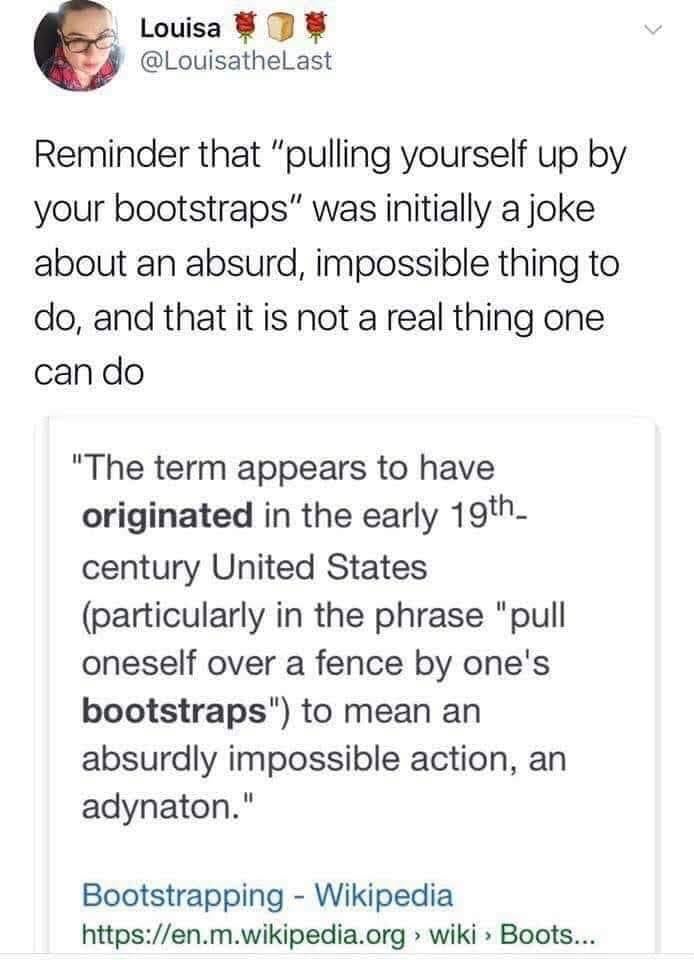 In the screenshot, the following tweet (from April 2018) appeared:

Reminder that “pulling yourself up by your bootstraps” was initially a joke about an absurd, impossible thing to do, and that it is not a real thing one can do pic.twitter.com/Bs939CkGtZ

It included a written portion and a screenshot, both reading:

Reminder that “pulling yourself up by your bootstraps” was initially a joke about an absurd, impossible thing to do, and that it is not a real thing one can do

“The term appears to have originated in the early 19th-century United States (particularly in the phrase “pull oneself over a fence by one’s bootstraps”) to mean an absurdly impossible action, an adynaton.”

No link was provided. Google’s embedded dictionary definition for “pulling yourself up by your bootstraps” appeared before any search results, and it mirrored the provided explanation — suggesting that the phrase described applying effort by oneself in order to improve one’s circumstances:

That definiation confirmed that to “pull oneself up by one’s bootstraps” was a common expression. In that context, no information about the phrase’s origin or original meaning appeared.

In April 2018, the tweet referenced a Wikipedia entry for “Bootstrapping.” As of August 2022, the entry appeared to have been edited, but an “Etymology” tab read in part:

Tall boots may have a tab, loop or handle at the top known as a bootstrap, allowing one to use fingers or a boot hook tool to help pulling the boots on. The saying “to pull oneself up by one’s bootstraps” was already in use during the 19th century as an example of an impossible task. The idiom dates at least to 1834, when it appeared in the Workingman’s Advocate: “It is conjectured that Mr. Murphee will now be enabled to hand himself over the Cumberland river or a barn yard fence by the straps of his boots.” In 1860 it appeared in a comment on philosophy of mind: “The attempt of the mind to analyze itself [is] an effort analogous to one who would lift himself by his own bootstraps.” Bootstrap as a metaphor, meaning to better oneself by one’s own unaided efforts, was in use in 1922. This metaphor spawned additional metaphors for a series of self-sustaining processes that proceed without external help.

A reference to the purported original meaning of the term appeared in a New York Times editorial in late 2020, after the tweet was initially published. Another piece mentioning initial connotations of the phrase was published in late 2021, and a third in late 2019.

However, in March 2017 (before the tweet was published), author and linguist Anne Curzan wrote about the phrase and its origins.

Despite these critiques [about the concept of “bootstraps”], the history of this expression isn’t widely known, and anyone who has read my columns here in the past knows that I’m a firm believer that understanding the history of phrases and words gives us a more nuanced ability to use — and challenge — them. To provide the brief history below, I am drawing on the excellent word sleuthing work of Ben Zimmer and Barry Popik; please refer to their posts for more thorough coverage and many more examples.

The first citation we have about lifting oneself by one’s bootstraps comes from the Chicago newspaper, Workingman’s Advocate (1834): “It is conjectured that Mr. Murphee will now be enabled to hand himself over the Cumberland river or a barn yard fence by the straps of his boots.” Mr. Murphee was being critiqued for his claim to have invented a perpetual-motion machine.

For the rest of the 19th century, from what we can tell, the expression referred to absurd and unfeasible attempts to better one’s situation. Here is one great example from the Madison City Express (1843):

His Excellency is certainly attempting to lift himself up by his boot-straps, or, what is much better, is “sitting in a wheel-barrow to wheel himself.”

An August 2022 Facebook post depicted a tweet claiming that “pulling yourself up by your bootstraps” was initially a satirical phrase, describing an impossible act once likened to wheeling oneself in a wheelbarrow. References to the idiom’s evolution appeared in columns in 2020 and 2021 (after the tweet was published). However, in March 2017, linguist Anne Curzan explained the phrase originally described an impossible act, well before it evolved to describe improving one’s circumstances with no assistance.