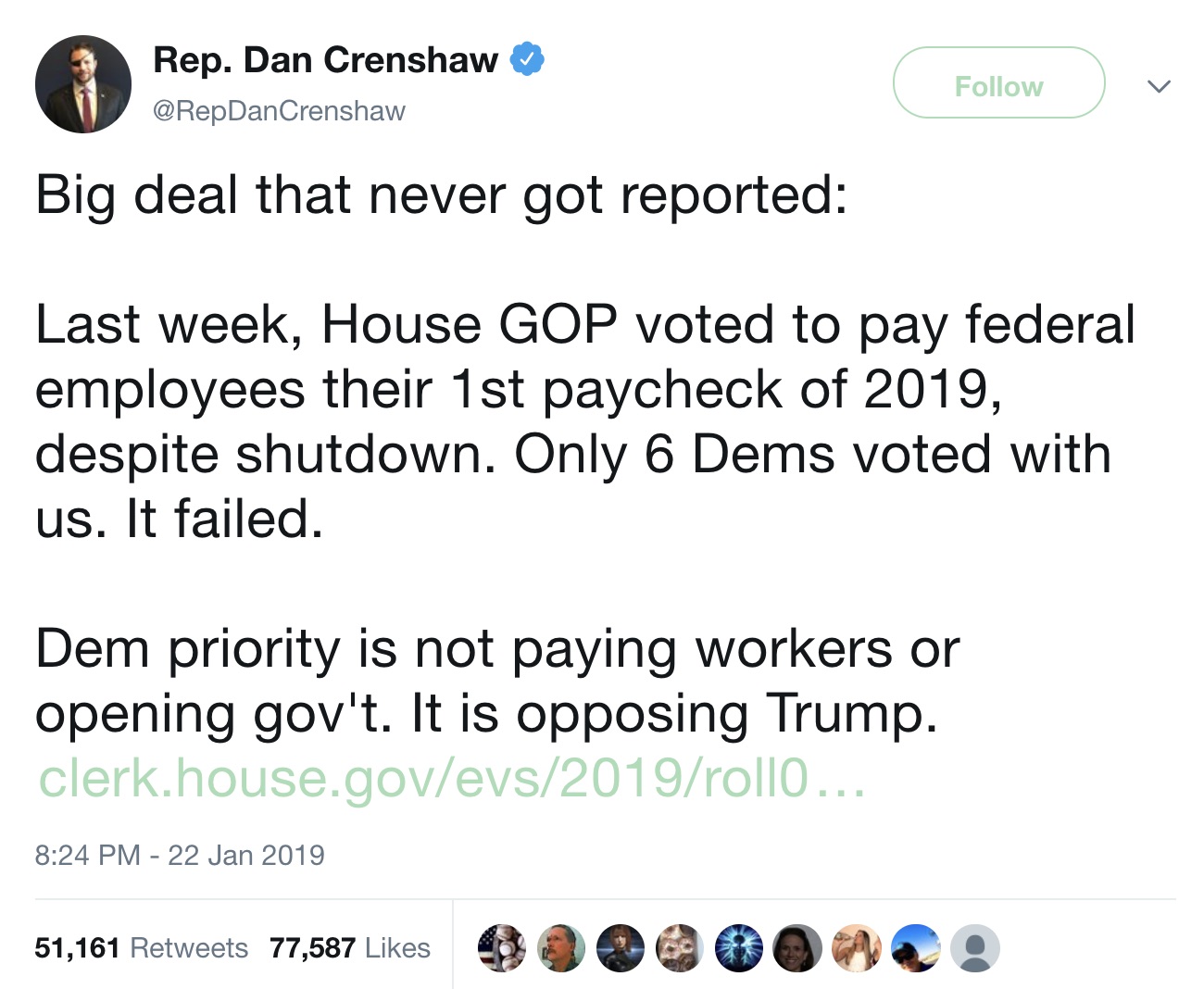 Big deal that never got reported:

Last week, House GOP voted to pay federal employees their 1st paycheck of 2019, despite shutdown. Only 6 Dems voted with us. It failed.

Dem priority is not paying workers or opening gov’t. It is opposing Trump. [link]

Rep. Crenshaw linked to a roll call vote for January 17 2019, for “final vote results for roll call 43.” As he stated, the tally of “yeas” for Republicans was 189, for Democrats, 6. No “nays” appeared in the Republican column, while there were 222 votes counted for Democrats. Overall, the tally in total was 195 “yeas” and 222 “nays.” On first glance, Crenshaw’s link appeared to support his claim.

Roll Call 43 was attached to “H.J. Res. 28.” We located a page on Congress.gov, “H.J.Res.28 – Further Additional Continuing Appropriations Act, 2019.” That resolution was sponsored by Rep. Nita Lowey (D-New York) and a section of the bill (“All Actions“) broke down its movements through January 23 2019.

As the expanded “All Actions” tab demonstrated, a number of actions related to the joint resolution took place on January 17 2019. The vote linked by Crenshaw was a Motion to Recommit:

The motion to recommit provides one final opportunity for the House to debate and amend a measure, typically after the engrossment and third reading of the bill, before the Speaker orders the vote on final passage. The motion is the prerogative of the Minority party and in many cases constitutes the Minority’s one opportunity to obtain a vote on an alternative or a proposal to improve the measure. In the case of a bill or a joint resolution, the Rules of the House prohibit the Rules Committee from reporting a special rule that denies a motion to recommit with instructions.

The Democrats largely voted against the Motion to Recommit (not the bill itself):

Complicating matters was a document in the comments [PDF], issued by the Executive Office of the President Office of Management and Budget:

If H.J. Res. 27, H.J. Res. 28, or any similar continuing resolution were presented to the President, his advisors would recommend that he veto the bill. 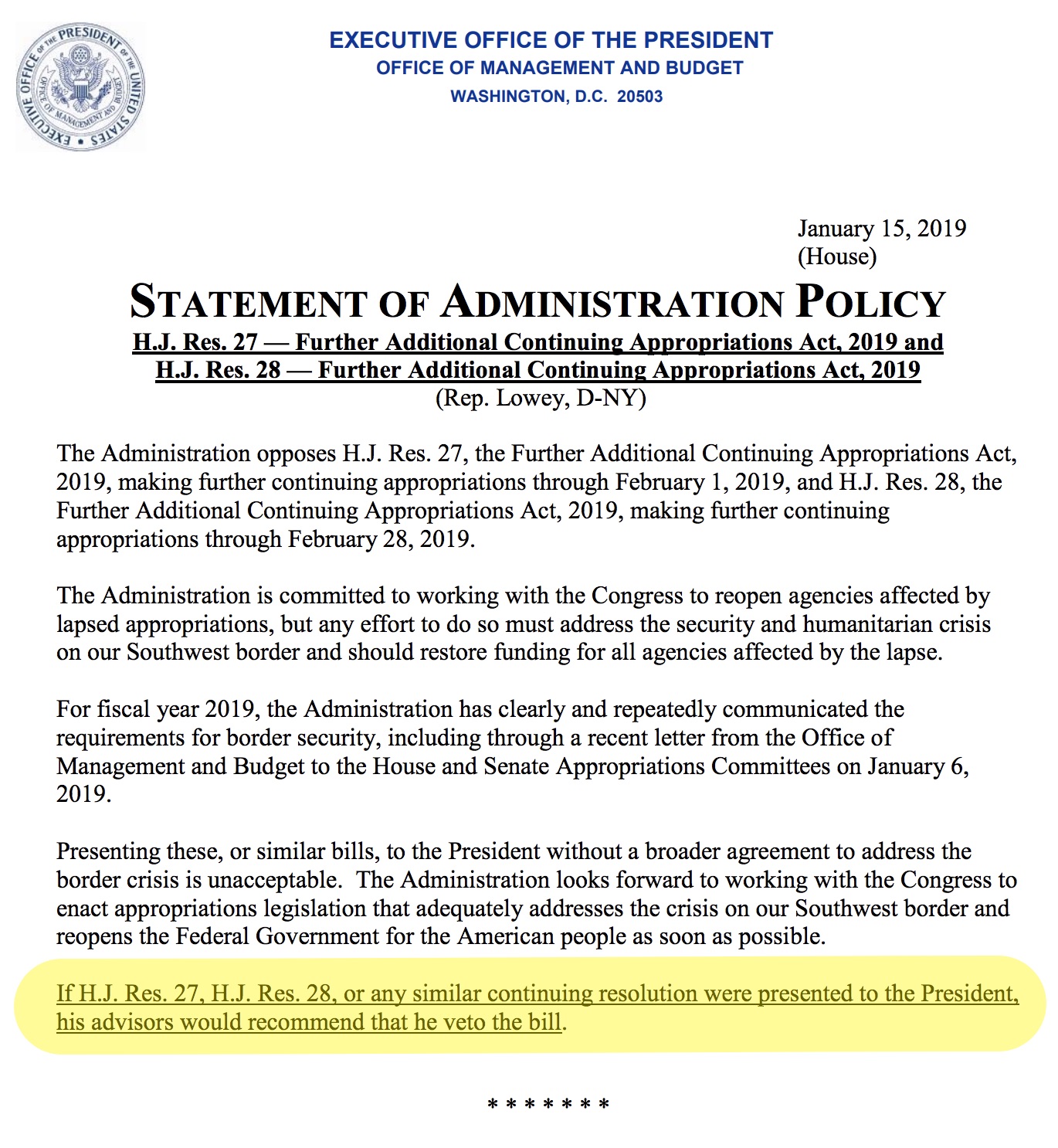 If you found the proceedings’ nuance confusing, you’re not alone. On January 17 2019, RollCall.com reported:

It seemed simple: The House on [January 17 2019] passed a continuing resolution that would reopen nine Cabinet departments through Feb. 28 [2019] on a voice vote, a result that devolved into partisan sparring on the floor as Republicans sought to vacate the vote and Democrats said, in effect, too bad. By the end, both sides hugged it out, vacated the initial vote, voted by voice again, and postponed a roll call vote until [January 23 2019].

It all started with passage, via voice vote on the resolution. Then the gavel came down, ending the vote.

In a series of responses and subsequent parliamentary inquiries, the chair, Rep. G. K. Butterfield, D-N.C., ultimately ruled that the vote had been decided by voice vote, and that the motion to reconsider had been laid on the table.

As a result, Minority Whip Steve Scalise, R-La., has asked unanimous consent that the House reconsider the vote on which the joint resolution passed.

Majority Leader Steny H. Hoyer, D-Md., said, “I’m not sure what’s going on, but I object.”

Confusion about where actions on the resolution lay appeared to reign in the chamber:

In objecting to Scalise’s request, Hoyer said many members have already departed the Capitol to catch their planes home. Scalise responded by noting they can tell the members to return or to delay a recorded vote until next week.

“The majority does have it within their purview to work with us to agree by unanimous consent to make it a previous vote,” Scalise said.

Hoyer declined, saying he does not have the ability to do that by unanimous consent.

“I regret Mr. Speaker that I am not in a position to try cure the failure in my view, because I didn’t hear it … the [chair] obviously did not hear it either,” he said, referring to Republicans saying they requested a recorded vote. Had the chair heard it he would have honored it, Hoyer said.

After the Democrats ruled against Republicans’ request, the members on their side of the aisle — dozens had stayed behind while most Democrats had cleared out of the chamber — started booing.

Several Republicans shouted at the chair or across the aisle with comments like: “You heard him and you walked away.” “We want to be heard.” “Is this how it’s going to be?”

Texas GOP Rep. Louie Gohmert added: “Where was the vote on the motion to adjourn? There was none.”

RollCall.com reiterated that an apparent miscommunication over whether Republicans “forgot to ask for a vote” on the continuing resolution led to further partisan bickering:

Hoyer said there was “absolutely not” any mistakes made by Butterfield while he was presiding over the floor during the CR vote.

“What happened was the Republicans forgot to ask for a vote — probably because they’re so used to not having to ask for a vote. … Having said that, their mistake led to their members not being able to express their opinion on the vote and we’re going to allow them to do that.”

Hoyer said he did not personally look at the tape but his staff did and Butterfield waited 30 seconds for a Republican to ask for a recorded vote. “And they just didn’t do it,” he said.

The White House has issued a veto threat against the temporary funding bill and Senate Republican leaders aren’t expected to take it up. President Donald Trump and Democratic leaders remain in a stalemate over border security funds with no signs of progress yet.

Rep. Crenshaw’s tweet intimated that House Republicans voted to issue a single paycheck to furloughed workers, while House Democrats voted against the measure. Based on accounts of events in the chamber on the day of the vote, even present Congressmen and women were unclear on the events that occurred. The vote linked by Crenshaw was a Motion to Recommit, which was voted down largely by Democrats and up largely by Republicans. A subsequent vote on passage occurred on January 23 2019, and it was favored by Democrats, while Republicans mostly voted against it.