On April 30 2019, the following post was shared to the Facebook group “Sussex County Voice” (archived here), alleging that when he was vice president of the United States, Joe Biden revealed the names and unit responsible for killing Osama bin Laden:

📢 PLEASE REMEMBER THIS about Joe Biden
When he was the Vice President, he did the most STUPID, unthinkable thing for a man in his position. He revealed the names and the unit that killed Bin Laden;
Remember this‼ 💔

The text that followed was in quotation marks, and did not appear to have been written by Lentowski. Variations of this passage appeared in other comments sections: 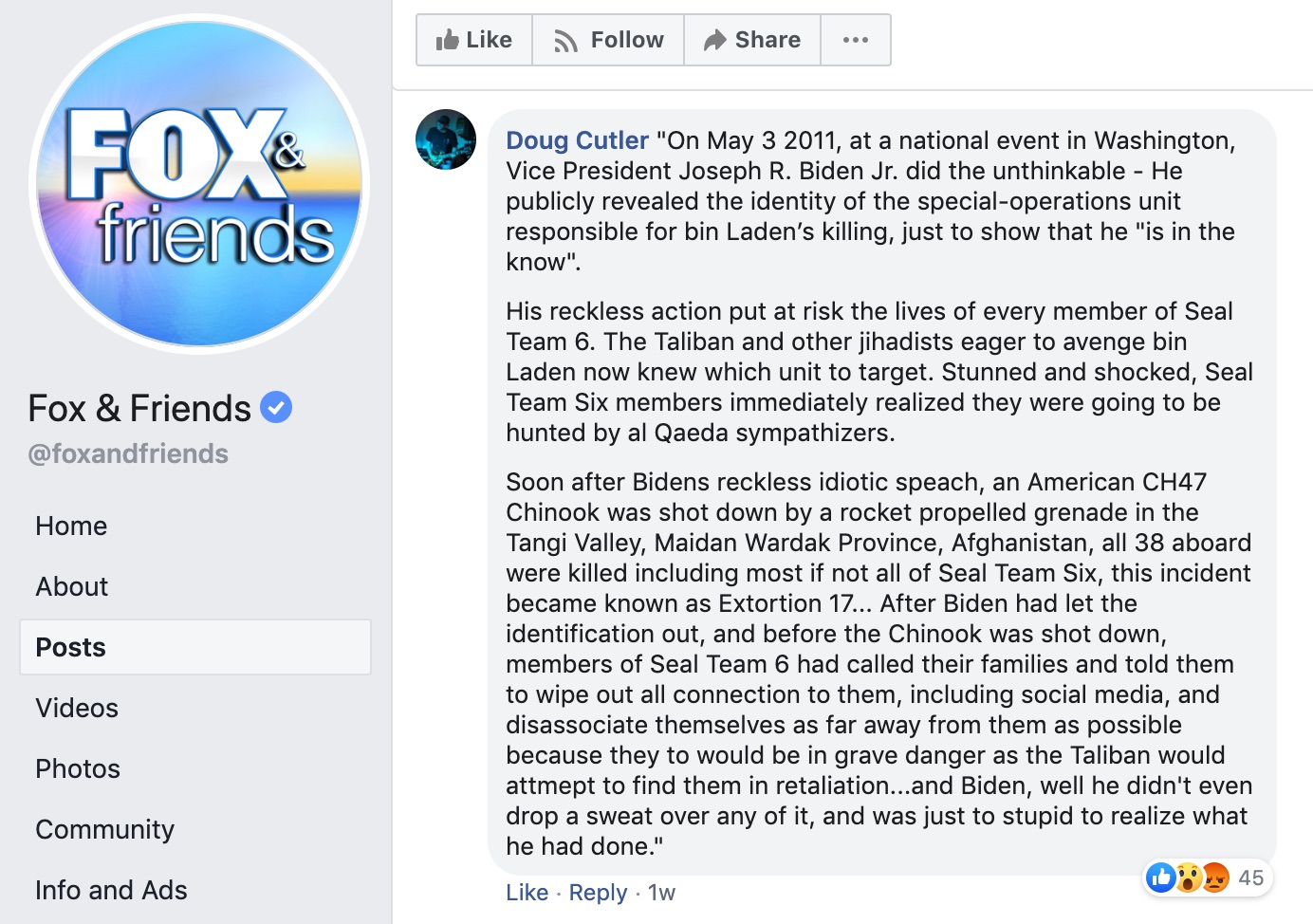 The comment, which was of unknown origin and had no citations, appeared to be the basis of Lentowski’s claim — that Biden disclosed the names of the individuals who executed the Bin Laden raid and killed Osama Bin Laden. Notably, the original copied message did not make that claim:

“On May 3 2011, at a national event in Washington, Vice President Joseph R. Biden Jr. did the unthinkable — He publicly revealed the identity of the special-operations unit responsible for bin Laden’s killing, just to show that he “is in the know”.

His reckless action put at risk the lives of every member of Seal Team 6. The Taliban and other jihadists eager to avenge bin Laden now knew which unit to target. Stunned and shocked, Seal Team Six members immediately realized they were going to be hunted by al Qaeda sympathizers.

Soon after Bidens reckless idiotic speach, an American CH47 Chinook was shot down by a rocket propelled grenade in the Tangi Valley, Maidan Wardak Province, Afghanistan, all 38 aboard were killed including most if not all of Seal Team Six, this incident became known as Extortion 17… After Biden had let the identification out, and before the Chinook was shot down, members of Seal Team 6 had called their families and told them to wipe out all connection to them, including social media, and disassociate themselves as far away from them as possible because they to would be in grave danger as the Taliban would attmept to find them in retaliation…and Biden, well he didn’t even drop a sweat over any of it, and was just to stupid to realize what he had done.”
*** I added extra links for those who have sent messages. Its easy enough to look up the information yourself as well. These were just a few of many. ***

Lentowski claimed that Biden had revealed the names of the individuals involved in the raid, but the original commentary indicated that Biden revealed the “identity of the [Special Operations] unit” (not the individuals’ names) involved in the raid. Although the latter claim appeared common in its own right, the iteration claiming Biden revealed names moved far more quickly on Facebook. On May 7 2019, the original poster commented: 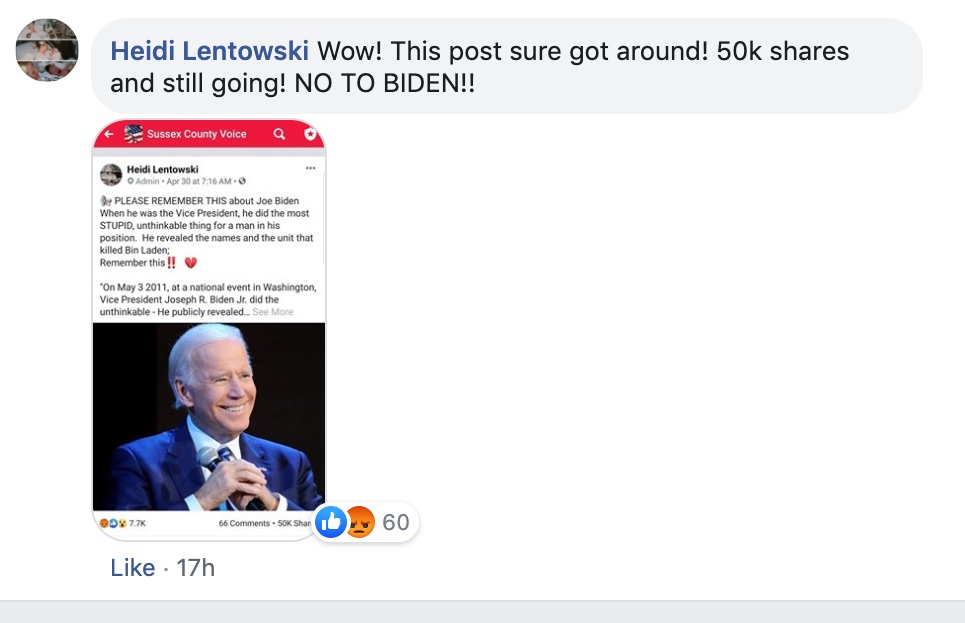 The claims made in the second portion of the comment, which were presumably written by someone else, appeared to be linked to a 2012 controversy alleging that U.S. President Barack Obama and Vice President Joe Biden both “leaked” classified information in the days after the raid. The New York Times reported on a short film made about those accusations, as well as Obama’s claim that the assertions were a political smear:

In a direct attack on one of President Obama’s political strengths, a group of former special operations and C.I.A. officers started a campaign [in August 2012] night accusing Mr. Obama of recklessly leaking information about the raid that killed Osama bin Laden and other security matters to gain political advantage.

The new group, called the Special Operations Opsec Education Fund, using shorthand for “operational security,” describes itself as nonpartisan, but some of its leaders have been involved in Republican campaigns and Tea Party groups. A 22-minute video called “Dishonorable Disclosures” featured on its Web site appears to be aimed squarely at the president, echoing charges made previously by Mitt Romney and other Republicans.

The Obama campaign immediately compared the effort to the “Swift Boat” advertisements against Senator John Kerry in the 2004 presidential campaign. Like that effort, which attacked Mr. Kerry’s military record in Vietnam, the Opsec site goes after Mr. Obama’s strong points on national security — specifically his role in overseeing the military-Central Intelligence Agency raid that killed Bin Laden, the founder of Al Qaeda, in May 2011.

In an effort to portray Mr. Obama as a braggart taking credit for the accomplishments of special forces and intelligence operatives, the video omits some of his remarks in announcing Bin Laden’s killing. In that late-night televised address, Mr. Obama credited 10 years of “tireless and heroic work of our military and our counterterrorism professionals,” but that is edited out.

In a CNN interview [in July 2012], Adm. William H. McRaven of the Navy, who oversaw the raid as commander of the Joint Special Operations Command, said, “The president and his national security team — I’m not a political guy, but I will tell you as, as an interested observer in this — they were magnificent in how they handled it start to finish … At the end of the day, make no mistake about it, it was the president of the United States that shouldered the burden for this operation, that made the hard decisions, that was instrumental in the planning process, because I pitched every plan to him.”

Despite the rumors, Obama’s late-night speech announcing the successfully executed raid and death of Osama Bin Laden (the video and a transcript of which are archived here) did not mention Seal Team 6 nor any of its members by name, describing them instead as “a small team of Americans” who “carried out the operation with extraordinary courage and capability.”

Remarks from a May 2011 speech given by Biden are also referenced in the second portion of Lentowski’s comment:

Very little reporting on Biden’s May 2011 comments was available; opinion pieces published years later were much more plentiful. An original source item from May 2011 published by the UK’s Telegraph was no longer available in 2019, but an archived link to the piece provided specific quotes:

But here’s what the legendarily verbose and loose-lipped Vice President Joe Biden said at a dinner at Washington’s Ritz Carlton Hotel [on May 3 2011] to mark the 50th anniversary of the Atlantic Council:

Let me briefly acknowledge tonight’s distinguished honorees. Admiral James Stavridis is a, is the real deal. He can tell you more about and understands the incredible, the phenomenal, the just almost unbelievable capacity of his Navy SEALs and what they did last Sunday.

Folks, I’d be remiss also if I didn’t say an extra word about the incredible events, extraordinary events of this past Sunday. As Vice President of the United States, as an American, I was in absolute awe of the capacity and dedication of the entire team, both the intelligence community, the CIA, the SEALs. It just was extraordinary.

The purported betrayal of SEAL Team Six was originally attributed to President Obama, not Biden, in Dishonorable Disclosures. Biden’s May 3 2011 remarks (in which he mentioned Navy SEALs) were initially a footnote to that controversy, one which critics claimed was a version of the “Swift Boat” attack on John Kerry’s earlier campaign.