Merchant Marine John "Chickie" Donohue arranged a "beer run" to six friends in an active war zone in Vietnam in the 1960s. 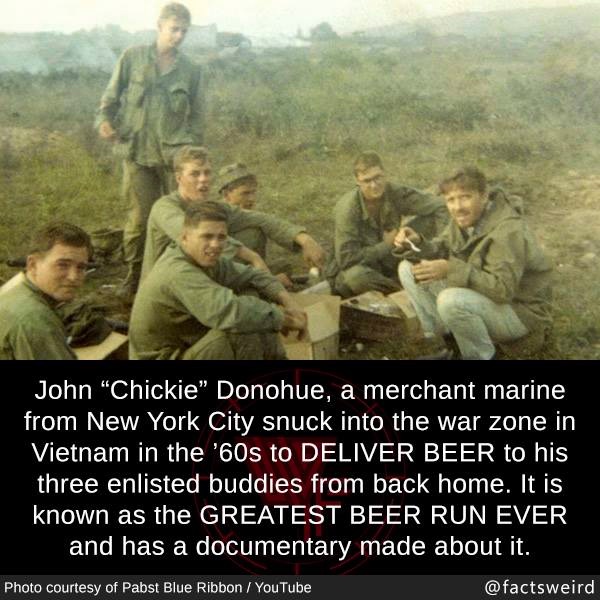 John “Chickie” Donohue, a merchant marine from New York City snuck into the war zone in Vietnam in the ’60s to DELIVER BEER to his three enlisted buddies from back home. It is known as the GREATEST BEER RUN EVER and has a documentary made about it.

At a time when the Vietnam War was at its height, one man, John “Chickie” Donohue, snuck back into the war zone to find his 3 closest friends and buy them a beer.

Crazy or caring, Chickie gave his friends more than beer, he gave them hope. Hope that helped each one safely return home when the war was over. Now, 47 years later, the group is reunited to relive the greatest beer run ever.

The image featured in the meme appeared in the clip at around the 1:24 mark. Donohue and the friends he purportedly traveled to visit described meeting in a war zone in Vietnam, but the account provided was longer and more detailed than the version presented in the meme. However, the basic aspects of the tale remained the same: Donohue visited Vietnam while his friends were deployed, with the intent of buying them a beer (or several.)

The New York Times profiled Donohue’s Vietnam “beer run” in May 2017, in a piece headlined, “A Daring Beer Run to Soldiers in Vietnam, Recounted Yet Again”:

“For half a century, I’ve been told I was full of it, to the point where I stopped even telling this story,” said Mr. Donohue, 75, who has related countless times how he took a patriotic bartender’s suggestion and made a daring, adventurous visit to Vietnam in 1967 as a civilian to deliver beer to his soldier buddies … Tired of the scoffing, he has now written a book about it — “The Greatest Beer Run Ever: A True Story of Friendship Stronger Than War” — with Joanna Molloy, a former reporter for The New York Daily News.

In that telling, the Times explained that Donohue was motivated by opposition to the Vietnam war and that he traveled armed with a dozen and a half cans of Pabst Blue Ribbon:

Mr. Donohue, who had served four years in the Marine Corps and was working as a merchant seaman, took [anti-war sentiment] to heart and got a job as an oiler on the Drake Victory, a merchant ship taking ammunition from New York to Vietnam. He shipped out with a duffel bag full of beer and what information he could gather on a half-dozen friends stationed in Vietnam.

… “It took two months to get there, so I drank all the beer,” [Donohue] told the sandhogs, adding that he replenished his supply in Vietnam. He arrived in Qui Nhon harbor, where his friend Tom Collins was stationed with the 127th Military Police Company.

“He came through at a time when society didn’t want us and the protesters were on us,” added Mr. Collins, a retired New York City police detective. “But that’s Chickie. He’s one of the nicest but craziest guys you ever want to meet.”

In June 2017, Task and Purpose’s “The Unbelievable True Story Of The Greatest Beer Run In History” summarized Donohue’s storied trip to Vietnam during the war:

Drunk ideas, while entertaining, rarely end well. But there are exceptions. Like that time in New York in the late 1960s when a conversation about anti-war protesters led one veteran to set off on the greatest beer run in history … What followed was an 8,000 mile, four-month odyssey. Donohue trekked across a war-torn country, talked his way onto transport trucks and military aircraft, all so he could meet up with local guys from his neighborhood and bring them a cold — okay, lukewarm — brew.

“A lot of my friends were serving in Vietnam, and I just wanted to go over there and buy them a beer,” he candidly explained in a 2015 video short, in which Donohue met up with three of the servicemen he’d provided with beer in Vietnam: Bobby Pappas, Tom Collins, and Ricky Duggan.

… Donohue talked his way onto convoys, military mail planes, and transport helicopters. He even got caught in the Tet Offensive and was briefly stranded when his ship left port without him. So he hung around, caught up with his buddies on the front lines for a bit longer, and by March 1968, made his way back to Inwood where his beer run quickly became a local legend.

John “Chickie” Donohue’s long-circulated claims about visiting enlisted buddies during the Vietnam war were substantiated by his friends (along with travel documents shown in the Pabst video above). However, the meme condensed the story into a version that didn’t align entirely with Donohue’s original tale. Donohue and his friends claimed that he indeed visited several war zones and areas of active combat on his lengthy trip, but said it went on for months and was not a singular incident.

Further, the story was largely a first-person account, and its details relied on the recollections of those involved