LEGO stopped marketing police figurines and a White House building set in response to the death of George Floyd and subsequent protests.

On June 3 2020, a Facebook post circulated with a viral claim that children’s toy manufacturer LEGO had ceased marketing police figurines and a White House building set due to the death of George Floyd and subsequent protests:

The person who posted this referenced a statement from Ben & Jerry’s (“Dismantle White Supremacy“) and spoke of action in support of Black Lives Matter by LEGO:

Okay but can we talk about the badass motherfuckers at LEGO?? These guys are up there with Ben & Jerry’s on showing where they stand.

The first of three attached screenshots was by @LEGO_Group (verified):

We stand with the black community against racism and inequality

There is much to do

The next two tweets were from reporter Alex Donaldson, describing the LEGO brand’s purported action during the protests:

“Wow, Lego has now gone a step further and is pulling down all the marketing for any sets they have that are based around the Police theme or include Police characters. That’s a decades-long staple being stepped off[.]

“This includes the Lego Architecture White House set, which pretty much spells out where they stand politically[.]”

Donaldson linked to toy trade publication ToyBook.com, and a since-updated June 2 2020 post about LEGO’s communication with affiliate marketers in the United States:

The Toy Book has received a copy of an email sent to affiliate marketers by Rakuten Linkshare on behalf of the LEGO Group. The email requests removal of product listings and features for more than 30 LEGO building sets, Minifigures, and accessories that include representation of police officers, firefighters, criminals, emergency vehicles, and buildings. Sets include the LEGO City Police Station, Fire Station, Police Dog Unit, Patrol Car, Fire Plane, Mobile Command Center, Police Highway Arrest, and many more. Even the LEGO City Donut Shop Opening set — which includes Police Officer “Duke DeTain” and “Crook” Minifigures — roleplay items including a Police Handcuffs & Badge Set, and the adult builder LEGO Creator version of The White House made the removal list.

An email to and from redacted addresses contained several products and attendant SKUs, and asked that in “light of recent events” the products listed “be removed from sites and any marketing ASAP”: 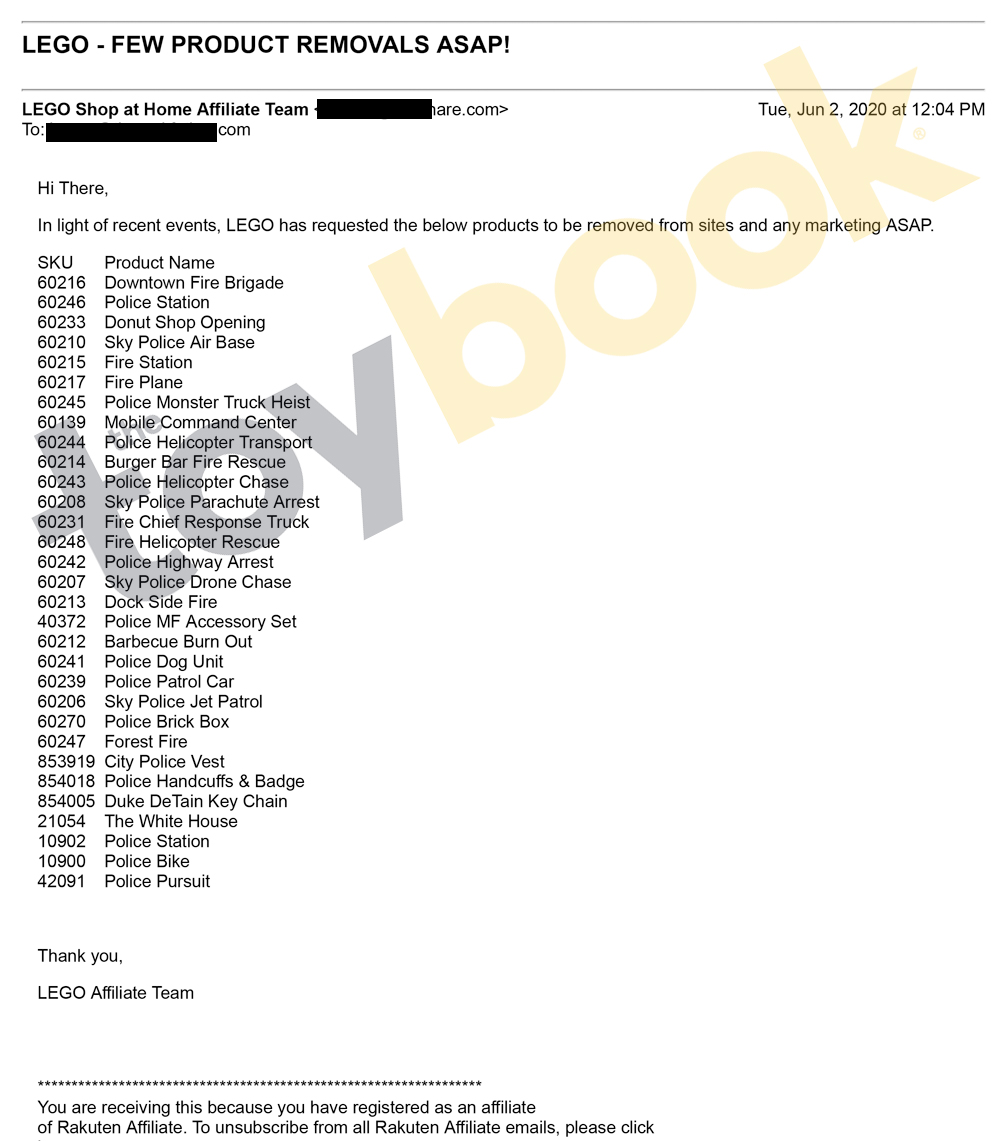 The email was brief, and it focused more on specific LEGO playsets than the totality of action being taken. On June 3 2020, ToyBook.com added a statement from a LEGO spokesperson clarifying the purpose of the email and the scope of the marketing drawback:

We requested that our affiliate partners refrain from posting promotional LEGO content as part of our decision to respect #BlackOutTuesday and pause posting content on our social media channels in response to the tragic events in the US. We regret any misunderstanding and will ensure that we are clearer about our intentions in the future.

On June 4 2020, the same official LEGO account issued a statement on Twitter about the email and its viral popularity:

We’ve seen incorrect reports saying we’ve removed some LEGO sets from sale. To be clear, that is not the case and reports otherwise are false. Our intention was to temporarily pause digital advertising in response to events in the US. We hope this clears things up. ♥️

We’ve seen incorrect reports saying we’ve removed some LEGO sets from sale. To be clear, that is not the case and reports otherwise are false. Our intention was to temporarily pause digital advertising in response to events in the US. We hope this clears things up. ♥️

Based on the initial report from ToyBook.com, which was itself drawn from a leaked email, initial reports LEGO had pulled specific products involving police and the White House were not necessarily inaccurate — they were just based on a not-very-specific email sent from LEGO’s affiliate marketing contacts to internet marketing affiliates. However, the email is real. On June 4 2020, LEGO clarified that the sets were not removed or retired, just part of a temporary digital marketing “pause” due to protests against police brutality across the United States.