Mark Cuban "started an online pharmacy where over 100 lifesaving medications are offered at low costs."

On June 7 2022, an Imgur account shared a screenshot of a Facebook post about billionaire Mark Cuban starting an online pharmacy offering necessary prescription medications at a low cost: 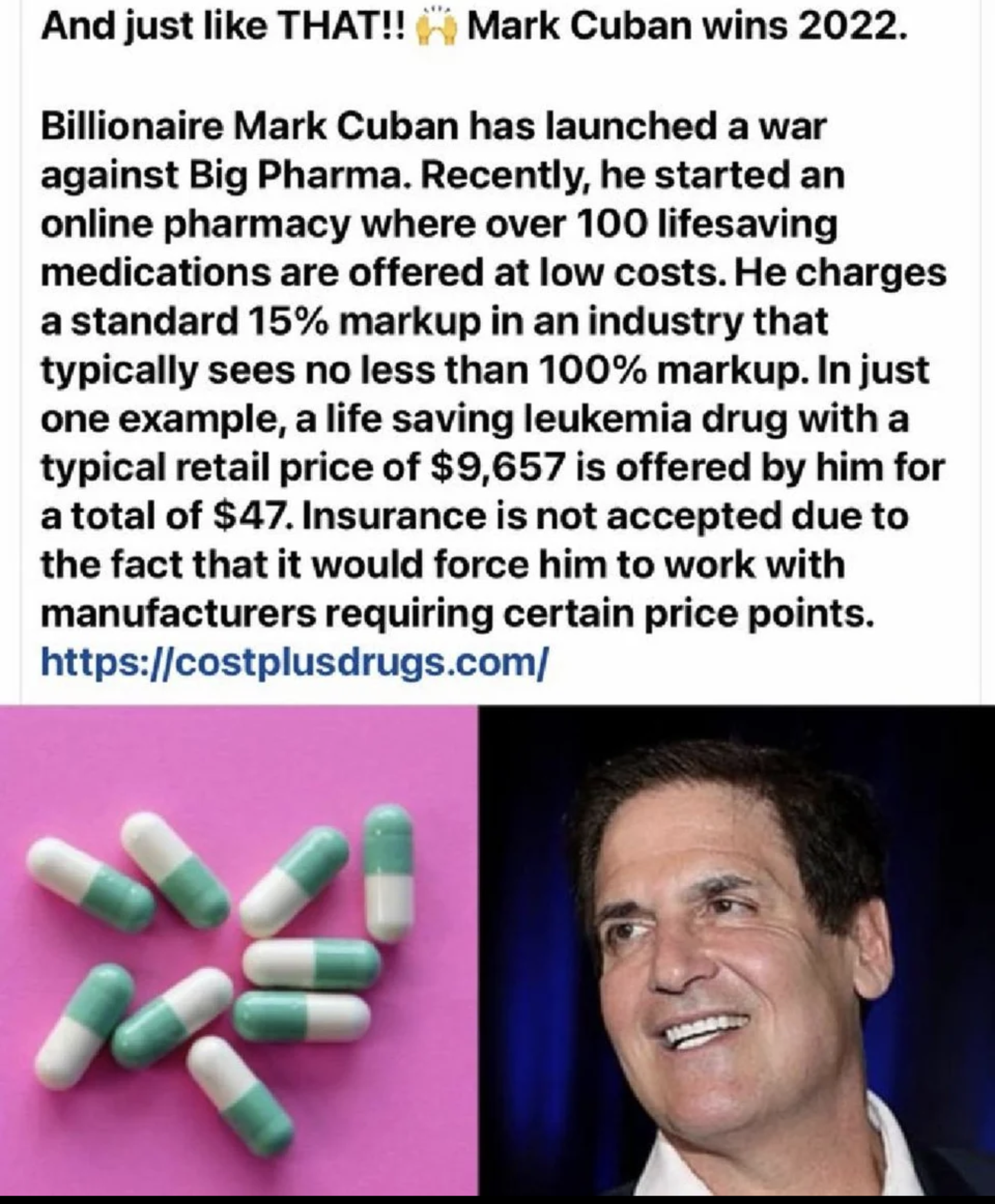 More of this please. from MadeMeSmile

All three posts (two to Imgur, one to Reddit) included an image of pills to the left, and Cuban to the right. Two of the posts featured text from a February 2 2022 Facebook post.

Billionaire Mark Cuban has launched a war against Big Pharma. Recently, he started an online pharmacy where over 100 lifesaving medications are offered at low costs. He charges a standard 15% markup in an industry that typically sees no less than 100% markup. In just one example, a life saving leukemia drug with a typical retail price of $9,657 is offered by him for a total of $47. Insurance is not accepted due to the fact that it would force him to work with manufacturers requiring certain price points.

At the bottom, a link to costplusdrugs.com appeared. The second Imgur variation (not showing the Facebook post) cited the same figures for a “life saving leukemia drug”:

In just one example, a life saving leukemia drug with a typical retail price of $9,657 is offered by him for a total of $47. Insurance is not accepted due to the fact that it would force him to work with manufacturers requiring certain price points.

Mark Cuban’s online drugstore, Mark Cuban Cost Plus Drug Company, is a legitimate online store to buy medication. It’s registered as a “wholesale drug distributor” instead of a “pharmacy” because Mark Cuban’s store does not fill prescriptions itself — it works with a partner pharmacy to dispense medication.

Mark Cuban Cost Plus Drug Company explains on its website it sets its prices by negotiating directly with the manufacturer and then adds a 15% markup, a $3 fee for pharmacy labor and the cost of shipping. The company does not accept insurance but will accept a Health Savings Account or Flexible Spending Account card to pay for orders. It has carried a selection of generic medication since it opened in January [2022], and can currently deliver in every U.S. state but North Carolina.

The mission page for Mark Cuban Cost Plus Drug Company confirms its namesake’s involvement in the company as an investor, and lists Alexander Oshmyansky as its founder and CEO … In an email, Oshmyansky explained that Mark Cuban Cost Plus Drug Company’s exact license depends on the jurisdiction, but it’s typically registered as a pharmaceutical wholesaler or a virtual wholesaler.

In January 2022, FierceHealthcare.com (which describes itself as “deliver[ing] healthcare news at the intersection of business and policy”) published an article on the topic which appeared to be the source for the $9,657 figure; it reported:

Mark Cuban Cost Plus Drug Company (MCCPDC) has launched its online pharmacy as part of an ongoing effort to provide consumers with low drug prices.

The pharmacy claims to offer significant savings, with several prescription drugs reportedly at more than half the cost of the next most affordable option. For instance, leukemia treatment imatinib has a retail price of $9,657 a month, according to MCCPDC, compared to $120 with a common voucher. Its price through the new company, however, is just $47 per month.

MCCDPC aims to bypass so-called middlemen and markups and boasts that it reflects actual manufacturer prices along with a flat 15% fee. To avoid working with pharmacy benefit managers, the pharmacy will be cash-only. The pharmacy is powered by Truepill’s digital health platform and relies on its nationwide pharmacy footprint to fill and deliver prescriptions.

“We will do whatever it takes to get affordable pharmaceuticals to patients,” said Alex Oshmyansky, CEO of Mark Cuban Cost Plus Drug, in an announcement. “The markup on potentially lifesaving drugs that people depend on is a problem that can’t be ignored. It is imperative that we take action and help expand access to these medications for those who need them most.”

In that excerpt, the site used leukemia drug imatinib as an example, with a purported retail price of $9,657 and a Cost Plus Drugs price of $47. On June 7 2022, imatinib was one of the medications featured on the costplusdrugs.com landing page:

Although the figures were different, the percentage difference was about the same. On one of the Imgur threads, the most upvoted comment said:

I love his quote for this. ” I could make a fortune from this. But I won’t. I’d rather f-up the drug industry in every way possible.”

A search for that string of text led back to www.markcubancostplusdrugcompany.com. In a section that identified Oshmyansky as founder and CEO and Cuban as an investor, an “Our Mission” statement featured Cuban’s quote: 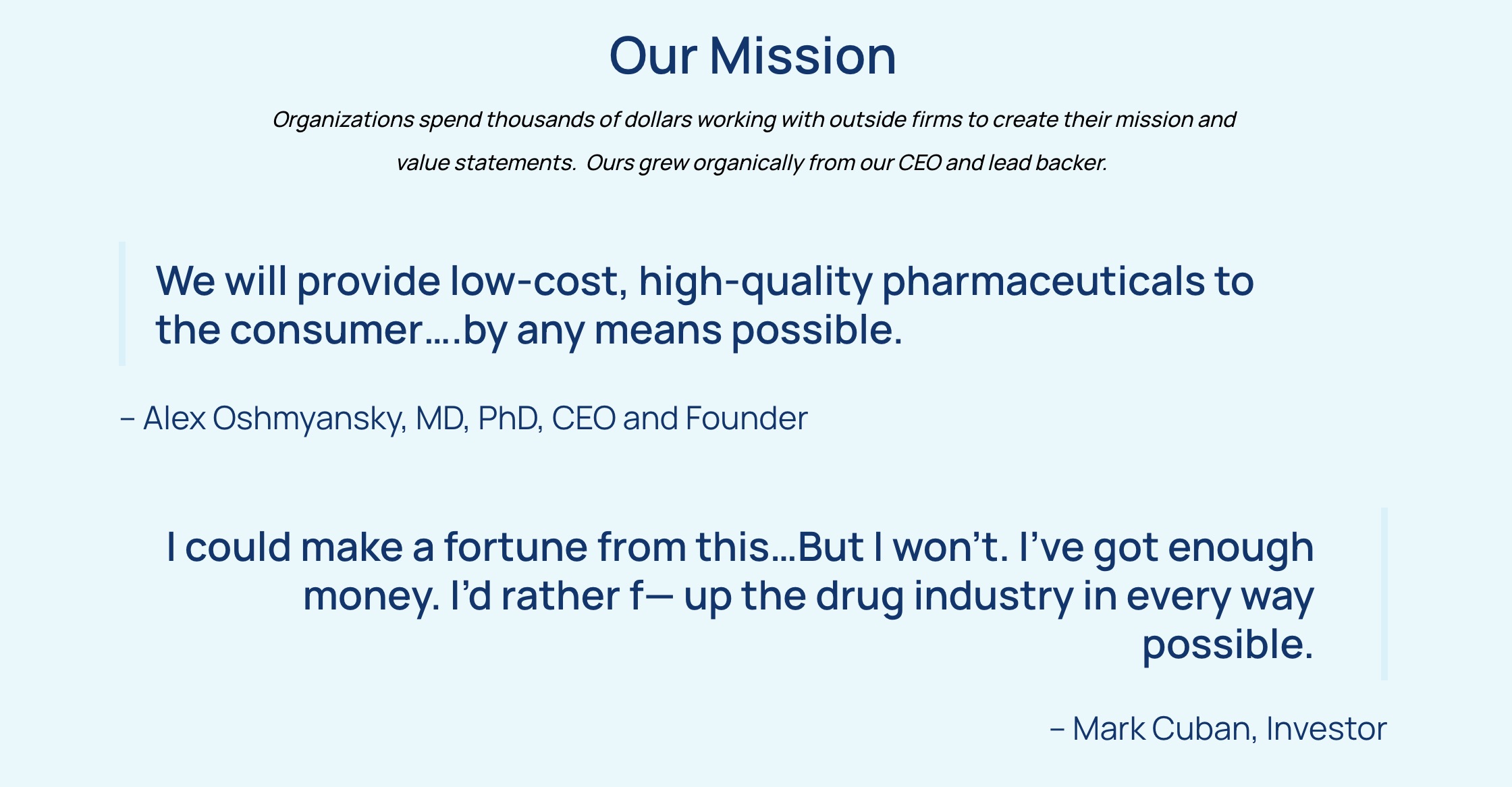 It is unclear why an early February 2022 Facebook post about Mark Cuban starting an online pharmacy became virally popular in June 2022. The post correctly stated that Mark Cuban was involved with the launch of Cost Plus Drugs in January 2022; Alex Oshmyansky was CEO, and Cuban was an investor. Prices in one example (the cost of imatinib, or Gleevec) seemed to have changed between January and June 2022, but the cited savings were similar in terms of percentages. And as an Imgur user correctly observed, Cuban stated he could “make a fortune” from the endeavor, but had “enough money,” and would “rather f— up the drug industry in every way possible.”