"Big Bird almost joined NASA's Challenger mission 'to encourage kids to get interested in space.' Had the plan been followed through, millions of kids would have watched Big Bird and the spacecraft explode live on TV."

In June 2022, a long-circulating claim that Big Bird nearly “died in space” on the ill-fated Challenger expedition re-emerged on an Imgur post: 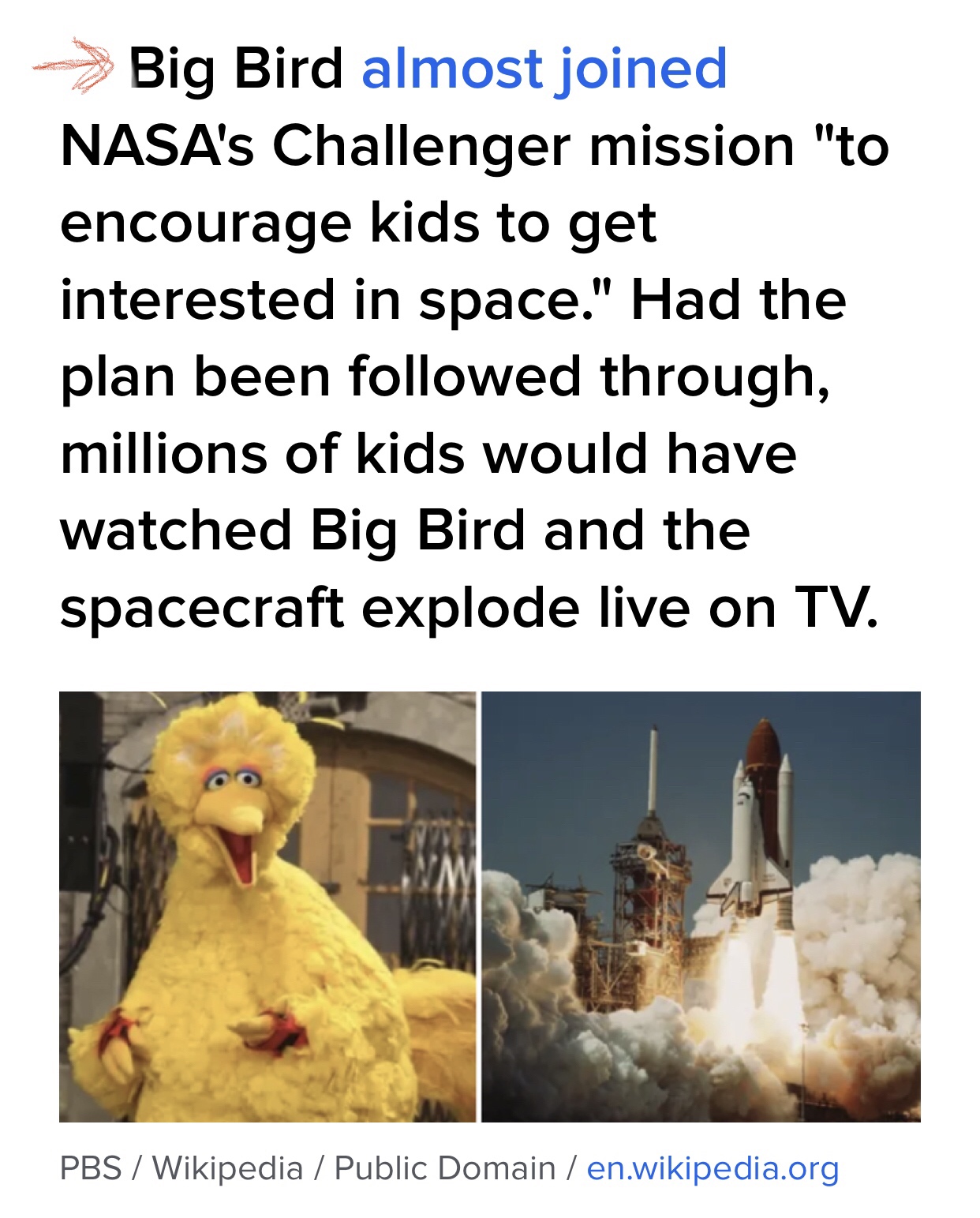 On what appeared to be a screenshot of a listicle, Sesame Street‘s Big Bird was shown next to to a photograph of a space shuttle. Text on the image read:

Big Bird almost joined NASA’s Challenger mission “to encourage kids to get interested in space.” Had the plan been followed through, millions of kids would have watched Big Bird and the spacecraft explode live on TV.

A Google search of that text (without additional quotes) returned only 14 matches, the first a December 26 2020 post to meme aggregator iFunny. Another iFunny iteration was second, and the third match was a February 2019 BuzzFeed listicle with the headline, “What Disturbing Fact Would Ruin Everyone’s Childhood?”

Similar (but not identical) text appeared second on the list, alongside the images seen in the meme. It was possibly cropped into the image, and it said:

Perhaps you heard that Big Bird almost joined NASA’s Challenger mission “to encourage kids to get interested in space.” Had that plan been followed through, millions of kids would have watched Big Bird and the Challenger explode live on TV.

Most iterations we located were in the format of the screenshot, without additional information or links. On BuzzFeed, the author linked to a January 2018 History.com page, “Big Bird Nearly Rode on the Disastrous Challenger Mission.”

It went into quite a bit of detail, and described somewhat less of a close call than image-based versions implied:

Spinney never applied for [NASA’s Space Flight Participation Program], but NASA reached out to the creators of Sesame Street with a proposal to send him into space in the early 1980s. By then, his puppet was a worldwide celebrity. [Puppeteer Carroll] Spinney, who got into puppeteering when he was a child, had been part of Sesame Street since its inaugural season, performing both Big Bird and Oscar the Grouch.

Played by Spinney like a massive, joyful six-year-old, Big Bird became a stand-in for Sesame Street’s viewers, learning the alphabet and discovering the ins and outs of the world right along with them. In space, he presumably would have done the same thing, bringing a dose of wonder and awe to the zero-gravity environment of orbit.

It’s not clear what sank Big Bird’s chances at a civilian spaceflight. Spinney maintains it was the puppet’s 8-foot-2 stance—a size that would have taken up a significant amount of shuttle real estate. In 2015, NASA confirmed that initial conversations with Sesame Street had taken place, but that “the plan was never approved.”

History.com indicated that in 2015, NASA confirmed talks to send Spinney as Big Bird into space on the Challenger shuttle. A May 2015 NBCNews.com article, “NASA Confirms Talks to Fly Big Bird on Doomed Shuttle Challenger,” reported in part:

“I once got a letter from NASA, asking if I would be willing to join a mission to orbit the Earth as Big Bird, to encourage kids to get interested in space,” Spinney recalled [in April 2015] in an essay published by The Guardian. “There wasn’t enough room for the puppet in the end, and I was replaced by a teacher.”

NBC News included a May 2015 statement from NASA, in response to Spinney’s recollection. It confirmed Spinney’s account — that NASA considered Big Bird, but the plan was never approved:

“In 1984, NASA created the Space Flight Participant Program to select teachers, journalists, artists, and other people who could bring their unique perspective to the human spaceflight experience as a passenger on the space shuttle. A review of past documentation shows there were initial conversations with Sesame Street regarding their potential participation on a Challenger flight, but that plan was never approved.”

A June 2022 Imgur post included a meme claiming Big Bird “almost joined NASA’s Challenger mission,” a plan that would have inflicted even more distress on children exposed to the shuttle’s ill-fated launch. It was true that NASA engaged in “conversations” about including Spinney and Big Bird. Both NASA and Spinney suggested that the proposition didn’t go very far, possibly for logistical reasons involving the size of the puppet.