After the February 26 2020 Democratic debate, memes and Twitter screenshots circulated on Facebook which suggested that presidential candidate Michael Bloomberg said that Bernie Sanders — also running for president — would have beaten United States President Donald Trump in 2016: 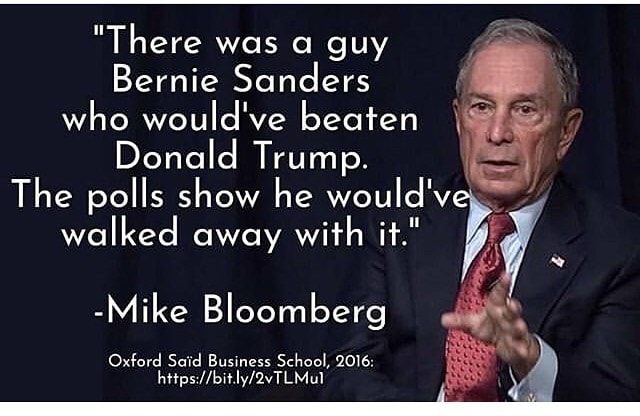 On the image of Bloomberg above, appended text read:

“There was a guy Bernie Sanders who would’ve beaten Donald Trump. The polls show he would have walked away with it.” – Mike Bloomberg [location] 2016

A screenshot of a February 6 2020 tweet also circulated, with a slightly longer quote attributed to Bloomberg. In that iteration, he was quoted as adding “but Hillary Clinton got the nomination” in 2016:

A day before the debate, the same claim appeared on Reddit’s r/SandersForPresident:

Mike Bloomberg: “Bernie Sanders would have beaten Trump in 2016 & would’ve walked away with it.” from SandersForPresident

A video was appended to that post, with transcribed words on the screen. That nine-second clip was restricted solely to Bloomberg’s statement that Sanders, in his opinion, would have defeated Donald Trump in 2016.

Bloomberg added that “for a variety of reasons,” Hillary Clinton got the nomination in 2016:

There was a guy, Bernie Sanders, who would’ve beaten Donald Trump … the polls show he would have walked away with it. But Hillary Clinton got the nomination for a variety of reasons.

That excerpt also appeared in a longer video shared by Bernie Sanders’ Facebook page on February 25 2020:

The clip appeared to be from December 2016 when Bloomberg made comments at Oxford Saïd Business School, at roughly the 1:00:57 mark in the full video. And while the quote was not out of context, directly thereafter Bloomberg opined young voters didn’t understand Democratic socialism:

Because our kids no longer learn civics in school, they no longer study Western history, they no longer read Western literature, we are trying to change and dumb down the system, and if you don’t know what happened in the past, you’re gonna have to relive it. It’s unfortunate but true, and I think it’s very dangerous the world we’re going into, you see that both the left and the right coming up here, and the middle is getting unfortunately not listened to anymore, and it’s the extremists that are going to shape the political culture if we’re not careful going forward and we had extremism before especially on this continent, and it didn’t work out very well.

Remarks attributed to Bloomberg asserting Bernie Sanders “would’ve beaten Donald Trump … the polls show he would have walked away with it” were authentic, dating to a talk given by Bloomberg at Oxford in December 2016.